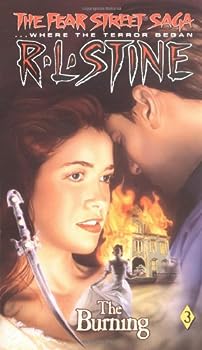 The Burning (The Fear Street Saga #3)

(Book #3 in the The Fear Street Saga Trilogy Series)

This description may be from another edition of this product. Daniel and Nora, two young lovers from feuding families, must use their forbidden love to stop the awesome evil that stalks Nora and her family.

Published by Thriftbooks.com User , 19 years ago
Simon thought he could escape his family's curse by changing his last name from Fier to Fear. He was dead wrong. The Fiers and the Goodes have been at each other's throat ever since the fiers had an innocent girl put to death. Her father (a Goode) put a curse on the Fiers so that he could get his revenge on the Fiers. This is a tragic story. I read this book in less than 4 hours. The plot is gruesome and there's a lot of twists in it. The part when Simon and Angelica drank blood was just disgusting but it goes to show how evil they were! i recommend this book to anyone who loves a good horror story. This is the most intriguing book i ever read. All that's missing is a happy ending.

Third and Final Book in The Fear Street Saga

Published by Thriftbooks.com User , 19 years ago
New Orleans, Louisiana--1845From the moment Simon Fear saw Angelica Pierce at her Mardi Gras party, he knew he had to have her, even if that meant killing her two suitors. However, Angelica has a surprise of her own--she is just as eager to get rid of them as he is. She later reveals to Simon that she, too, is involved in the occult and wishes to manifest her "power through evil". Clearly, these two are a match made in hell, perfect for each other.Twenty years pass and Simon and Angelica Fear now live in Shadyside Village. They have five children and are extremely wealthy. It seems as though Simon has finally fled his family curse. That is, until one horrible afternoon when two of his daughters are brutally murdered in a twisted turn of events. Thereafter, the Fear couple shut themselves in and refuse to ever leave their mansion.It's not until 35 years later, in 1900, that the final climax to the Fear-Goode saga occurs when Daniel Fear (the grandson of the above couple) falls in love with Nora Goode, a descendent of the Fear's mortal enemies. Nora is the one responsible for starting this trilogy in the hopes that the centuries-old battle between the Fears and Goodes would finally come to an end. And it does, but not exactly as she had hoped."The Burning" is the third and final book in The Fear Street Saga, preceded by "The Betrayal" (#1) and "The Secret" (#2). This is a must-read for those of you who have already read the previous two books. Highly recommended for Fear Street fans.

Published by Thriftbooks.com User , 20 years ago
It was began just a fire. Not just an ordinary fire. A fire that killed an innocent woman. It began with with 2 families: the Goode and the Fier. Susannah Goode was burned at stake with her mother. The 2 innocent women died because of fault accusation of being a witch, doing magic. Then the father of Susannah Goode, George, never forgave for what the Fier did. They took everything from him, money, his wife, his daughter. He set the curse on the Fier family. Jonathan Fier thought if a Goode and a Fier could be together the curse will break. He was wrong. Very wrong! Simon Fier thought if he change the last name Fier to Fear would end the curse. He was deadly wrong! Simon wants the beautiful Angelica Pierce than anything else in the world. He would do anything for her. Then the curse back again when a Goode appear. Nora know the family history. Can she stops the curse before it too late?

It was very, and I mean very, bloody.

Published by Thriftbooks.com User , 22 years ago
I think this is the best out of the three. The end was so good. The story was well written. I felt I was in the book. There has to be a movie of this book. I loved the blood. I loved how a dude's head was crushed in the paddleboat. That was so cool. Read it. Love it. Buy it.

The Best of the Parts of All!

Published by Thriftbooks.com User , 22 years ago
The Fear Street Saga: The Burning was the best part of the books of all! Especially about Simon Fear how he had escaped the curse for a little while by changing his spelling of his last name. It didn't work when his two daughter were at each other! And then when Daniel came to visit that his Granfather Simon and Grandmother Angelice went out of their minds. I like the romance when Nora and Daniel decided to hook-up. That was awesome. I like that the best, and when they sneak out to get marry, but then what was really sad was that Daniel had plemish with his grandparents in the fire! I hate that!This book was absoutely great! I suggesty this book to all Fear Street lover who like different combinations of events. Go out and buy or borrow! This book is TIGHT!
Copyright © 2020 Thriftbooks.com Terms of Use | Privacy Policy | Do Not Sell My Personal Information | Accessibility Statement
ThriftBooks® and the ThriftBooks® logo are registered trademarks of Thrift Books Global, LLC