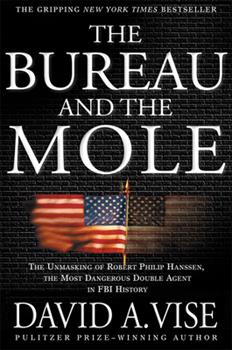 The Bureau and the Mole: The Unmasking of Robert Philip Hanssen, the Most Dangerous Double Agent in FBI History

by David A. Vise

Called a first-rate spy story (Entertainment Weekly), The Bureau and the Mole is the sensational New York Times best-seller that tells the inside story of FBI counterintelligence agent Robert Philip Hanssen, a seemingly all-American boy who would become the perfect traitor, jeopardizing America's national security for over twenty years by selling top-secret information to the Russians. Drawing from a wide variety of sources in the FBI, the Justice...

Published by James Hathaway , 3 years ago
Writer David Vise gives all the details and facts as they happened........lots of FBI background and background on the MOLE...Highly enjoying this read and so will you if you like non fiction spy thrillers......

Published by Thriftbooks.com User , 20 years ago
Read THE BUREAU AND THE MOLE by David A. Vise,an engrossing true spy thriller about the unmasking of Robert Philip Hanssen--the most dangerous double agent in FBI history.I was amazed to learn how Hannsen escaped detection for solong . . . also, I liked how the author unfolded his tale, along with that of FBI Director Louis J. Freeh (the man who set the trap that would expose the traitor within its mist). Spy thrillers are not typically my favorite type of reading, but I'm glad I made an exception for this one . . . the fact thatit was true made it so much more harrowing.There were many memorable passages; among them:Sex, among both numeraries and supernumeraries, is a taboosubject, and discussion of homosexuality in any form is considered dangerous because it can poison the soul. OpusDei itself is tightlipped about the lives and roles on numeraries. One of the Hanssens' daughters, Sue, is a numerary who, as required by Opus Dei, sleeps on a wooden board every night and without a pillow once a week. (Women are treated moreharshly than men in Opus Dei in order to quell their passions,officials say.) When Sue's sister, Jane, got married a numberof years ago, Sue turned down her invitation to be a bridesmaid.Opus Dei would not allow Sue to take a man's arm and walk down the aisle in a wedding.At the same time, Bob's head was spinning. He thought he knewhow to handle Bonnie. According to a friend of Bob's, "He has a little theory that every day you have to tell a woman a certain amount of positive things, and if you do, things will always be good. He called it his 'counter theory." He said in a woman's brain there is a counter and they count up the good things you say to them and the positive strokes you give them." As far as his work was concerned, Bob didn't want Bonnie to know anything. He had to do a better job of concealing things. And to make matters worse, now a priest was involved.Freeh knew that the FBI was at its best in a crisis, and he talked tough from the start. "We will search you and find you,"he said. "There is no place on earth where you will be safefrom the most powerful forces of justice." The director made itclear that he and other senior FBI personnel, along with thousands of agents and forensics experts working on thecase, were on a mission. Instead of regular shifts, they began putting in as many hours as possible each day untilthey needed a few hours of rest. It was during times likes thesethat Freeh, director of an agency with a multibillion-dollarbudget and thousands of employees, earned the nickname"the presidentially appointed case agent." Rather than planning for the long-term or staying abreast of developing cases and issues, Freeh became completely and totally involved in thedetails of the Oklahoma City bombing and a handful of otherhigh-profile cases on his watch.

Published by Thriftbooks.com User , 20 years ago
Really delved into the personalty of a dangerous double agent. The author portrays Robert Philip Hanssen as the devoted family man living a double life. From his contacts with the Soviet Union to his devout Catholic upbringing, the author really takes the reader on a trip to places that only a person with a double life would go. The author also reveals the ineffective inner workings of the FBI, as far as it pertained to keeping track of it's own agents. The author also does an excellent job in going into the background, in great detail, of FBI director Louis Freeh, and how he desperately searched out Hanssen after so many years. A great read.

Published by Thriftbooks.com User , 20 years ago
David Vise does an amazing job of keeping the reader turning the pages on this one! The Author puts you right into the mind of the most damaging spy in US history, and into his bedroom as well! The book reads like a classic fiction spy novel with twists and turns that keep the reader intrigued. I found the parallel story of Louis Freeh, the then FBI director, as well as deep insights into the KGB, and concurrent FBI initiatives over the 20 year story truley fasinating. The book contains actual letters, photos, and an excellent synopsis of what top secret security items were lost by the United States. I don't think people really understand the magnitude of what Hanssen gave away! Of all the spy novels I've read lately, fiction and non fiction, this is the Best Yet!

Published by Thriftbooks.com User , 20 years ago
After completing this book, I would like to say it might have been the most fascinating and well written books I have ever read. The author, David Vise, did a magnificent job writing this book to teach us about Hanssen. This morning I happened to be watching the Today show where Vise was interviewed! He seems like a very nice and personable man. David Vise is a great author and I found this book unbelievable. I highly recommend this book to anyone and everyone.

A Great story about a "great" Spy

Published by Thriftbooks.com User , 20 years ago
The Bureau and the Mole not only tells the most amazing and unbelievable story of the most successful double agent in history but also creatively interweaves the subtle and unique differences and similarities between Hanssen and Louis Freeh, the head of the FBI and Hannsen's boss. Even if you're not an espionage or counterintelligence buff, what you learn about Hannsen and his escapades as well as how the FBI is managed will absolutely blow your mind. The contents page alone will motivate you to read this book.Here are a few reasons why I rated this book a 5. 1. I'm not a fast reader, but the story is so intriguing that it kept me turning the pages. The author's writing style is clear and easy to read. I appreciate books that are short, sweet and to the point. I finished the book over the weekend. 2. I have followed this fascinating story of Robert Hanssen very closely since the beginning and now having read the Bureau I see that the author has obviously done his homework. The author uncovered many new and fascinating facts about Hannsen's complex life and sordid personality. While I find most of Hannsen's acts terribly disturbing, I at least have a clear picture into why he did what he did and what motivated him to do it. Believe it or not money was not his driving force. Considering the relationship between Hanssen and his father you wonder how many other Hanssen's are out there. David Vise, the author tells of one particularly amazing discovery. Hanssen's brother-in-law a FBI agent as well, attempts to turn Hannsen in more then 10 years ago but does the FBI pay any attention? 3. I like the way Vise clearly lays out in the appendix the incredible secrets that were not only available to Hanssen but ones that he sold to the Russians. I also enjoyed reading all of Hanssen's emails as well as the Internet postings (albeit sexually explicit) Hanssen put out on the www for the world to see. All of this information is valuable to the reader to better understand what kind of individual or animal would and could do the things he did. It's simply amazing how any one person has the ability to 'compartmentalize' so many aspects of their lives, (actually not so different from a recent President) and for so many years to keep everyone at bay. What was Bonnie possibly thinking about?Certainly in the months and years to come new information will be uncovered, written about and scrutinized. But as far as I'm concerned to this date The Bureau and the Mole tells the real Hanssen story. I look forward to the movie!
Trustpilot
Copyright © 2022 Thriftbooks.com Terms of Use | Privacy Policy | Do Not Sell or Share My Personal Information | Accessibility Statement
ThriftBooks® and the ThriftBooks® logo are registered trademarks of Thrift Books Global, LLC