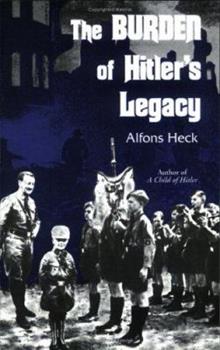 The Burden of Hitler's Legacy

The author shares 40 years of soul searching in the aftermath of Germany's total defeat and destruction.

Published by Thriftbooks.com User , 13 years ago
The Burden of Hitlers Legacy is the work of an accomplished, knowledgeable and talented writer. That having been said...I much prefered his first book "A Child of Hitler" in which he simply tells of his experiences, memories and reflections of life in the 1940's as a high ranking, 16 year old, Hitler Youth Leader. It is EXCELLENT. This book however (which I read immediately following having read his first book)was just a repeat, often word-for-word, of "A Child of Hitler". I would absolutely recommend anyone interested in this topic to read "A Child of Hitler" by Alfons Heck. Save your money and pass on "The Burden of Hitlers Legacy".

The Crime of Indoctrinating Children is revealed.

Published by Thriftbooks.com User , 21 years ago
....After the war, Alfons Heck, then 17 is captured by the Americans and given to the French. Since he isn't yet 18, he is spared death. But he will go on the rest of his life in bewilderment about what happened to him and the many young Hitler Youth. His book, The Burden of Hitler's Legacy, is his soul searchingautobiography that provides more understanding of what happened in Hitler's Germany than anything else I've seen. In addition, it is an eye-opener that demonstrates how vulnerable children are. I have read many books and articles about the holocaust and continue to be shaken by all accounts. This book makes more complete the story of what happened to the children of WWII. While I cannot condone what Mr. Heck did in his youth, as a teacher, mother, and former child, I can certainly understand how it happened. I applaud your courage, Mr. Heck, and the concern you feel for the other children in the Hitler Youth.
Trustpilot
Copyright © 2022 Thriftbooks.com Terms of Use | Privacy Policy | Do Not Sell My Personal Information | Cookie Preferences | Accessibility Statement
ThriftBooks® and the ThriftBooks® logo are registered trademarks of Thrift Books Global, LLC