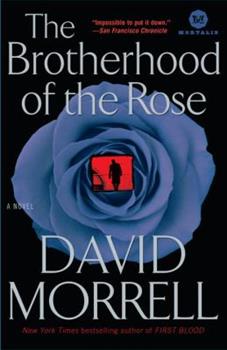 The Brotherhood of the Rose

(Book #1 in the Mortalis Series)

They were orphans, Chris and Saul-raised in a Philadelphia school for boys, bonded by friendship, and devoted to a mysterious man called Eliot. He visited them and brought them candy. He treated them like sons. He trained them to be assassins. Now he is trying desperately to have them killed. Spanning the globe and full of heart-stopping action, The Brotherhood of the Rose is an astonishing novel of fierce loyalty and violent betrayal, of murders...

Published by Thriftbooks.com User , 17 years ago
THE BROTHERHOOD OF THE ROSE may be the finest of David Morrell's many topnotch thrillers. The life story of Saul and Chris, two orphaned boys who become wards of the mysterious "Uncle Elliot," BROTHERHOOD OF THE ROSE introduces us to a plethora of familiar Morrell elements including his seeming favorite of the agent who renounces the world just to discover that the past can never be evaded. Morrell admits that he enjoyed the elements of BROTHERHOOD OF THE ROSE so much that he recreated Chris as Drew in THE FRATERNITY OF THE STONE (with which it forms a loose trilogy including THE LEAGUE OF NIGHT AND FOG). Of the three books, this is the best by far, like the others almost impossible to put down, tensely written, and unpredictable in its twists and turns. As this is the earliest book of the trilogy, Morrell is not writing to any previous standards, and, oddly enough, his standards were highest here in then-as-yet unfamiliar territory. A definitive winner!

Published by Thriftbooks.com User , 18 years ago
Saul and Chris were orphans raised in a Philadelphia boys school, bonded by everything they'd shared in their youth and by a man named Eliot, who educated them. By his side they learned world history, current events, several styles of self-defense and the fine art of assassination. Then, when they were ready, Eliot used them as spies in many perilous places. However, this last assignment he's given them may just be too much for the boys. Morrell is an exciting writer who draws you into his world of spies and counterspies and makes you believe. Five stars from me for Morrell because I was captured and captivated throughout the whole book.Reviewed by Vesta Irene

Published by Thriftbooks.com User , 18 years ago
This book... this author... flawless. I can't begin to explain the fun I had reading this book. The plot, action, characters, setting. It is all perfect. This book definately ranks high on my top 10 book list. Along with this book, I reccomend reading The Fraternity of the Stone, and then reading The League of Night and Fog, both by David Morrell. Basically, if you do not have this book... stop reading these reviews and buy it, get it from the library, get it from a friend, steal it, whatever... JUST READ IT!

One of the absolute best in this genre!

Published by Thriftbooks.com User , 19 years ago
The Brotherhood of the Rose is a spectacular effort! David Morrell is a master and this book attests to his gift of making stories that are thoroughly riveting. The plot and pace of this book is a standout in itself among Morrell's novels. The characters and story grip you right from the start and you will soon know what the term "unputdownable" really means. I read this novel many years ago and gave it to my cousin. Since then, no action novel I've read has surpassed this book in terms of plot and excitement.

My all time favorite

Published by Thriftbooks.com User , 21 years ago
You can check all of my other reviews, none is labeled 'all time favorite' except this one. I first read this book over 15 years ago and have gone back and re-read it numerous times.If you like great characters, involved plots, and tight suspense then this book is a must. The characters are painted so vividly that you feel as though you have always known them. The plot involves a great scenario set up in with a great degree of credibility. You believe that spy organizations like this exist, and that the Abelard sanctions really exist.David is known for his attention to detail and this book is no exception. The detail of the operations is astounding, he glosses over no part of the spy game he describes with a detail that makes it all seem real. Many authors just have the 'spy' put on a wet suit, dive under the boat with C4 and blow it up. David shows so much detail that it's like you are in the planning meetings and you know all the finer points of the craft.Everyone will enjoy this book. Whomever you are you should give it a shot.
Trustpilot
Copyright © 2022 Thriftbooks.com Terms of Use | Privacy Policy | Do Not Sell My Personal Information | Accessibility Statement
ThriftBooks® and the ThriftBooks® logo are registered trademarks of Thrift Books Global, LLC