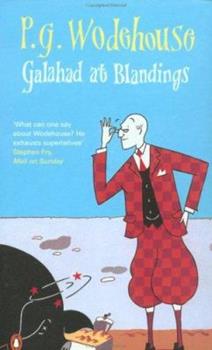 (Book #10 in the Blandings Castle Series)

Sam Bagshott, son of the late Boko Bagshott had been at Blandings Castle only a short while, but long enough to know that anyone enjoying its hospitality must get the occasional shock. He was prepared for bad news in any form, but not the one in which it actually came.

A Ripping Good Read, What?

Published by Thriftbooks.com User , 16 years ago
Readers versed in the Wodehouse canon will recall a delightful episode titled "Extricating Young Gussie." This installment in the Blandings Castle saga could be titled "Gally extricates everyone." It's not much about Lord Emsworth, and the perennially prize winning pig, Empress of Blandings, features only in a bit part. The usual bevy of imperious aunts cause the usual sackfuls of trouble for numerous tangled hearts. But the plot, such as it is, turns on Lord Emsworth's resourceful brother, the loveable rogue, Galahad Threepwood, and his Jeeves- like power to make things come right. While some of Lord Emsworth's behavior seems uncharacteristic, this later novel from 1965 is nevertheless prime Wodehouse and a ripping good read.

Published by Thriftbooks.com User , 20 years ago
This story by P.G. Wodehouse is very entertaining and a really good read. A great escape into the magical world of Wodehouse.

Published by Thriftbooks.com User , 21 years ago
P.G. Wodehouse once said that you could write about life as it is or as musical comedy. He chose to do the latter. As a result, I strongly prefer to listen to audio recordings of Mr. Wodehouse's novels. The dramatic portrayals add a great deal to the humor of the stories. This is the first one that I have heard by Jeremy Sinden. He is very talented and flexible in his characterizations, moving easily from men to women, from one English class to another, and even to including Americans. If you are familiar with the stories about Jeeves and the gentleman he serves, Bertram (Bertie) Wooster, which Mr. Wodehouse also wrote, you will feel at home with this tale, as well. Galahad plays the Jeeves-like role, but with greater elan than Jeeves ever did. You'll like Galahad. He's never let a pal down, and he has lots of them from his days carousing at the old Pelican Club. He's the bright, ne'er-do-well younger brother of Clarence, Lord Emsworth (who is fond of pigs, especially his prize-winning, Empress of Blandings, and his peace and quiet). The story begins with a misunderstanding (not unlike the ones that Shakespeare used in his comedies -- it must be something about the water in England). An American millionaire, Tipton Plimsoe (I apologize for the fact I may have the spellings wrong in this review, since I have only heard the audio cassettes), runs into his fiancee's cousin, and they imbibe a bit too much. In the middle of the night, he awakens to find himself in jail. Someone has taken the millionaire's wallet, so he has no money to post bail. The cousin remembers that Lord Emsworth is in New York, staying at the Plaza, so they call him. Lord Emsworth is a little simple and has a poor memory. Although he dispatches the $20 by messenger to release the two, he mistakenly interprets this as meaning that the millionnaire has lost all of his money in the stock market crash of 1929 (the backdrop of this story). The consequences of this misunderstanding almost cause three sets of lovers to be kept apart and Lord Emsworth to become engaged to a most unsuitable person. Worse yet, the Empress of Blandings herself is put at risk!You might think that such a story would have a very predictable plot. Nothing could be less true. Just when the plot seems to be comfortably taking you left, Wodehouse puts in a complication that suddenly causes a u-turn. Then, when you get settled into that direction, he sends you off suddenly at a 45 degree angle. And pretty soon, you are overwhelmed with complications to keep you amusingly occupied with how in the world this can ever be straightened out . . . even though you have a pretty good idea of how things must turn out eventually. But the complications serve an important purpose beyond keeping up the suspense. They also provide wonderful chances to show the true nature of the characters, and to flesh them out. This I found to be particularly well done in this book. Basically, Wodehouse likes to cont

Published by Thriftbooks.com User , 21 years ago
This book is standard Wodehouse, which means that it is a 5 star masterpiece and well worth the read. If you have never read Wodehouse this book is a very good introduction to some of his most endearing characters; take the chance and buy this book. If you have read any of his works then you are already a fan and do not need me to tell you to read this book.
Copyright © 2022 Thriftbooks.com Terms of Use | Privacy Policy | Do Not Sell My Personal Information | Accessibility Statement
ThriftBooks® and the ThriftBooks® logo are registered trademarks of Thrift Books Global, LLC