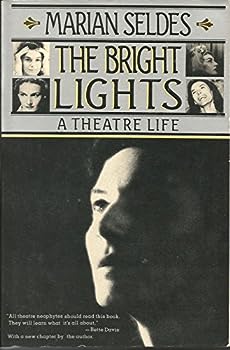 The Bright Lights: A Theatre Life

A memoir of the highs and lows of a life on the stage by the long-time actress. This description may be from another edition of this product.

A First Class book about ACTING

Published by Thriftbooks.com User , 22 years ago
The Bright Lights takes us on and off Broadway with Marian Seldes. This teaches you how to act on stage how to Audition for a good part and a not so good part how to deal with hurt and disapointments on stage and being in a long run such as Equis and Deathtrap. You learn of her sharing the stage with Richard Burton, Anthony Hopkins and Tony Perkins not with gossip but real observations of the theatre. She had to get used to a new director in The Chalk Garden when one was replaced before the Broadway but she shares lessons from that.We learn of her Expirences as a teacher in the Drama divison of Julliard. Her Tv appearnces and Radio apperance on Himan Browns Mystery Theatre.We learn how the Death of Zereo Mostel changed the course of a play.Marian Seldes came up working with Judith Anderson , Katharine Cornell and Sir John Gielgud among others.This is a great teaching book dealing with the inns and outsof the theatre without glitter and told with caring for fellow actors. In one way I compare it to Charles Grodens book it would be nice if you were not hear in that it shows how to deal with rejection.The Bright Lights should be reprinted so people wanting to be in the theatre learn what to expect along the way.
Trustpilot
Copyright © 2022 Thriftbooks.com Terms of Use | Privacy Policy | Do Not Sell My Personal Information | Accessibility Statement
ThriftBooks® and the ThriftBooks® logo are registered trademarks of Thrift Books Global, LLC