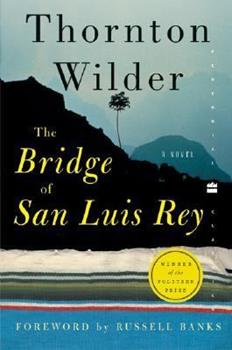 This beautiful new edition features unpublished notes for the novel and other illuminating documentary material, all of which is included in a new Afterword by Tappan Wilder. "On Friday noon, July the twentieth, 1714, the finest bridge in all Peru broke and precipitated five travelers into the gulf below." With this celebrated sentence Thornton Wilder begins The Bridge of San Luis Rey, one of the towering achievements in American fiction and a novel...

The Bridge of San Luis Rey

Published by Thriftbooks.com User , 16 years ago
A simple Franciscan monk, Brother Juniper, witnesses an accident that kills five travelers. For him, the accident is an opportunity to show that we are all part of God's intelligent plan, not victims of random, meaningless events. His study of these five lives takes many years to complete and fills volumes. In the end, of course, he falls short of his purpose. But his research shows something else. It shows how God's love is expressed in our world, sometimes through worthy and sometimes through what appear to be unworthy messengers. It also shows that no one is so alienated from God that he cannot be reached. Eventually, Brother Juniper suffers for his pretensions to expose the operations of God's will. Besides its deeply affecting exposition of the theme described above, The Bridge of San Luis Rey is a beautiful evocation of life in 18th century colonial Peru. Thornton Wilder's writing is just exquisite. In one scene, a selfish woman undergoes a transformation and spends the night composing an important letter to her daughter. Before dawn, she goes to the door upon her balcony and looks up "at the great tiers of stars that glittered above the Andes. Throughout the night, though there had been few to hear it, the whole sky had been loud with the singing of these constellations." The 1975 Pocket Book (Washington Square Enriched Classics) edition I have includes an interesting reader's supplement with illustrations and notes.

Published by Thriftbooks.com User , 19 years ago
A brilliant book. Wilder richly deserved the Pulitzer that this book earned. Short, at 133 pages in this edition, it is uniformly excellent. Wilder's sharp wit and turn of phrase are unmatched. The book's theme is powerful and resolved in an unexpected and profound way. Brother Juniper, a thoughtful friar, witnesses the collapse of a rope bridge over a gorge in rural Peru in 1714 and the death of the five people walking along it. He views this event as an opportunity to prove the existence of god and, finally, to elevate theology to the rank of the hard sciences. Juniper instinctively believes that there must be a divine reason for those five to have been chosen for death. He senses god's powerful, latent hand in the bridge's collapse and commits himself to learning all there is to know about the victims in order to discern the plan and prove god's existence. Who were the victims? What were their lives like? Why did they die?Juniper's conclusions are, of course, inconclusive. He never found the pattern, but remained convinced that it was there, just that he was too poor an intellect to see it. Such questions, naturally, were anathema to the church of the age and Juniper and his book were destroyed for heresy. Readers who focus on the same questions as Juniper are doomed to be just as frustrated. Wilder is far too insightful to let Juniper have the last word, for ultimately, it is not Juniper who stumbles upon the meaning of the five deaths, but the survivors -those who loved the victims- as well as the reader. What the five had in common was that they were human beings, with tender sides and flaws and significant unrequited loves. There is nothing remarkable here, we are all built that way. After their deaths, the Abbess whose orphanage was home to two of the victims realizes that the meaning lies in the lives themselves, in the love the victims shared with those near to them. That there is no immortality, not even memory or good works, so that what matters is the fleeting existence of goodness, and therein lies god's grace. Love is a powerful and immediate force, not a point for theological debate. "Many who have spent a lifetime in passion can tell us less of love than the child that lost a dog yesterday."Wilder's prose is smooth and polished and yielding of aphorisms: the six attributes of the adventurer (a memory for names and faces, the gift of tongues, inexhaustible invention, secrecy, a talent for chatting with strangers, and a freedom from conscience); or an observation that "the public for which masterpieces are intended is not on this earth." Every line is adept, every page a wonder.While Wilder wrote the book in 1927, it is perhaps a perfect inquiry into 17th century baroque worldviews and the rationalist philosophies they spawned. The baroque had reached Spain, if not Peru, by 1714. Its fascination with death and the brevity of life ("carpe diem" and countless reminders of the inevitabiity of death) resound

What Does it Mean?

Published by Thriftbooks.com User , 19 years ago
A short, sweet novel. Greater minds than mine awarded it a Pulitzer Prize, so I won't blabber on about its quality. Wilder wastes few words, inserts no extra padding, to tell his story. This lacks the action sequences and suspense of Tom Clancyish pulp, but does sneak up on the intellect, leaving the reader expectantly looking for the subtle connections that weave the characters together. The manifest story is simple. Five people have fallen to their death in Peru, and Brother Juniper seeks to prove the goodness of God by evaluating their lives to demonstrate exactly why bad things happen. Gently satirical, Wilder consigns poor Brother Juniper to a fitting end, for the chutzpah of attempting to decipher the mind of God with a moral calculus. Juniper has forgotten his Master's admonition, to "judge not." Hidden from Juniper's attempt to make sense of tragedy lay connections that he could never imagine, longings, love unrequited, and loneliness unimaginable. In the end, we learn, not WHY bad things happen, but the power and beauty that can rise from the ashes of tragedy.Wilder tells snippets of stories, weaving lives together, in a way that goes unnoticed at first, then becomes subliminal, and finally explodes into consciousness at the end. While these lives and their interconnections are somewhat contrived, they effect a transformation, both of the story-line and the reader by the end of the book. Well worth reading a second time.<P...

Published by Thriftbooks.com User , 19 years ago
The hardest books to review are your favorites. This is my fifth attempt on this one.The Bridge of San Luis Rey concerns one of the primary questions of human existance. Does God have a plan for our deaths and is there a reason we die? (Pretend that was only one question.) This novel is certainly the best to explore the topic. It is vastly insightful and gives its insight within a powerful narrative.The novel begins with the collapse of the bridge of San Luis Rey which kills the five people crossing it. Brother Juniper witnesses the catastrophe, and he decides to use this opportunity to study the reasons for death. What follows is the story of each of the persons' lives who died. In each story you find a connecting bond: love. Each had been touched by love. The stories together reaveal simply that. Everyones' life matters because of love, and the dead are still connected to the living by a bridge of love.What I've written about the novel is really too simplistic. The Bridge of San Luis Rey is only a very short novel, but within those pages is a multitude of insight which cannot be explained in a short review (especially without giving away too much of the book). I think that I'll just conclude this rambling review by saying that this is a beautiful little novel which deserves a place among the very top novels of last century. I also think that in wake of the Sept. 11 tragedy, The Bridge of San Luis Rey could gain importance by giving the people affected insight into the tragedy and comfort them.

Published by Thriftbooks.com User , 21 years ago
I was shocked to see that the average of the book reviews for this work was only a 4 stars. This is among the finest books I have ever read--somewhat comparative to Steinbeck's The Pearl and Hemingway's Old Man and the Sea in its brevity, lyricism, seeming simplicity and actual depth of both feeling and philosophy. The rhythmic beauty of Wilder's poetic prose would quite literally take my breath away at points and the story, with its intense sympathy for all mortal strivings and failings, touched me so deeply that I cry and laugh even in remembrance of many of the parts. I don't think there was a character in the book whom I didn't feel deeply empathetic with. The extended metaphor of the bridge which links fate and accident, love and loneliness, life and death was so flawlessly, yet subtly, present throughout that I am continually held in awe at the author's genius. More than anything though, the theme of the transcendence of the loneliness of mortality through love continues to affect my personal life every day.
Copyright © 2020 Thriftbooks.com Terms of Use | Privacy Policy | Do Not Sell My Personal Information | Accessibility Statement
ThriftBooks® and the ThriftBooks® logo are registered trademarks of Thrift Books Global, LLC