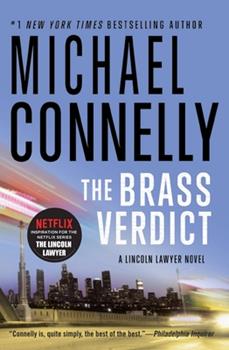 INSPIRATION FOR THE ORIGINAL SERIES THE LINCOLN LAWYER - THE #1 TV SHOW ON NETFLIX Defense attorney Mickey Haller and Detective Harry Bosch must either work together or die as they investigate a Hollywood lawyer's murder in this "epic page-turner" (Library Journal). Things are finally looking up for defense attorney Mickey Haller. After two years of wrong turns, Haller is back in the courtroom. When Hollywood lawyer Jerry Vincent is murdered, Haller...

Published by Thriftbooks.com User , 14 years ago
Connelly's Detective Bosch is an uncommonly well developed and explored character. It stands to reason that our author having described the world from Bosch's view, the best way for the reader to deepen his experience of Bosch is to see him interact with other characters without being privy to his thoughts and intents. An interesting gambit; for Bosch has placed Mr. Connelly in the upper echelons of this genre and it is a brave author who places his franchise in a supporting role. I am heartened to see that Mr. Connelly remains no less a moralist than Bosch's namesake painter, who sought to portray a clear difference between good and evil, innocence and sin, through his art. Yet despite all the fun with the hugely enjoyable plot and characters, The Brass Verdict contains a much more sobering message. Our system of justice is as fallible as the people who make it run. The opening page is a classic: it contains truth that I intend to utilize in my own legal practice when I attempt to persuade my clients that the Courtroom is the last place to resort for a decision--much better to settle if you can. Yet despite the lies and ugliness of the "real" world, however encumbered we may be by societal expectations, rules, laws and even our own desires, we remain free to determine our own contribution and to participate in the building of a perfectly just society. We take our system for granted. We take the protection of police for granted. We take the impartiality of juries for granted. We take the honesty of witnesses and judges for granted. But what else can we do? Unless we adhere to the fiction of the "whole truth and nothing but the truth" it all falls apart. Unless we choose to believe in the potential for a better world and then act upon that belief, we remain helpless victims--Mr. Connelly admirably points out that we must each be accountable, that private decisions will ultimately have a most public consequence. One of the strongest themes in Mr. Connolly's works is the power of family and friendships. His characters learn the hard way to value their children. His books reward loyalty and goodness. In a world that is prepared to throw out the concept of truth as a childish fiction more appropriate to the good old days when people went to Sunday School, Mr. Connelly uses his talents to remind us that truth remains and that goodness is its own reward; he cautions us that we disregard truth at our peril and for that he deserves our respect. Highly Recommended

Smash up of two series is a true hit!

Published by Thriftbooks.com User , 14 years ago
The Brass Verdict by Michael Connelly is his twentieth book and brings together Connelly's two famous characters: Detective Harry Bosch and attorney Mickey Haller. Haller returns to the courtroom after a long absence to take on the case of a Hollywood mogul accused of murder. The mogul's first attorney turns up dead, and Haller is assigned to the case. But it gets a bit sticky when it looks like the killer is now after Haller, and Det. Bosch shows up to "protect" Haller, even if it means botching up his case. I've never read any of Connelly's books before, and I'm not normally a fan of this type of fiction, but Connelly sucked me in from the first page with his masterful dialogue and action scenes. Haller is a compelling character full of hard-won wisdom and surrounded by intriguing characters. Bosch is a bit of a jerk, to say the least, but I couldn't help liking him as well. Connelly creates terrific scenes with tightly plotted suspense. Consider me a new fan!

The Lincoln lawyer is back in business!

Published by Thriftbooks.com User , 14 years ago
Mickey Haller, the criminal defense attorney who had put his law practice on hold while he recovered from the aftereffects of having been shot in the gut -- which included a ferocious painkiller addiction -- is summoned by the chief judge of the Los Angeles Superior Court. In her chambers she informs him that he has inherited the active cases of lawyer Jerry Vincent. Vincent was murdered the night before. Mickey knew the man. Fifteen years ago, Mickey won the acquittal of double murderer (yes he was guilty) Barnett Woodson by proving a key witness of Vincent's was lying. Vincent's career with the district attorney's office went up in smoke, but he rebounded and took up more lucrative defense work. Over the years, Vincent and Mickey acted as each other's backups. Now, Mickey heads over to Vincent's office. Mickey himself has never been an office man; he prefers working out of the back seat of one of his little fleet of Lincolns while being chauffeured to clients. But now, Vincent's office is his. Arriving there, he faces off with two LAPD detectives already pawing through confidential client files. One happens to be Detective Harry Bosch, a fellow at the center of quite a string of crime fiction in his own right. Among Mickey's new clients is Walter Elliot, the publicity-splashed Hollywood producer who is scheduled to go on trial for the bloody shooting deaths of his wife and her lover. Mickey must convince the man to retain him. Elliot wants above all for his trial to proceed on schedule so he can be exonerated and get back to his movies. Tamping down his better judgment, Mickey promises no postponement. He really wants this big, lucrative case. So begins Michael Connelly's flawlessly paced courtroom and crime novel, The Brass Verdict.... Walter Elliot is no street hood Barnett Woodson. He's a willful and powerful businessman with an agenda, a timetable, and vast resources. Mickey has his hands full getting Elliot to cooperate fully in his own defense. Yet, Elliot's cocky confidence in Mickey's abilities to secure a "not guilty" verdict seems odd given the strength of the prosecution's case against him. At least at first. Then Mickey, a man who inherited his famous father's incisive legal instincts, thinks he's found ammunition that could blow the prosecution's case sky high (much as happened in the old Woodson case). The unfolding of Mickey's defense of Elliot, despite his problems with and doubts about the defendant, makes for riveting, cagey courtroom drama. Don't forget Jerry Vincent either. Harry Bosch won't. He and Mickey gradually form a not entirely trusting covert alliance to try to find Vincent's murderer. When they have said and done all that can be to identify and apprehend said killer or killers, the reader may nod and say, "I knew that" about one major piece of the puzzle. But this bit of formulaic obviousness doesn't spoil the overall plot's inventive robustness. Connelly, the non-lawyer, doesn't load up his novel with

"A trial is a contest of lies. And everybody in the courtroom knows this."

Published by Thriftbooks.com User , 14 years ago
This terrific follow-up to The Lincoln Lawyer, featuring troubled defense lawyer Mickey Haller, also includes famed police detective Hieronymous (Harry) Bosch, who has been a hero in thirteen previous Connelly mysteries. Though Haller and Bosch work on opposite sides (one on defense and one on prosecution) and even live on opposite sides of the bay, they are thrown together against their wills and must cooperate if they are going to see justice served. Haller has just returned to law practice after a hiatus in which he has dealt with his demons and his addictions, the result of a long, painful hospitalization and several complex surgeries after he was "gut shot." Haller has inherited the entire caseload of former prosecutor Jerry Vincent, who became a defense attorney after Haller beat him soundly in a court case. Vincent has been murdered in the garage beside his office, his laptop and case notes missing, with the biggest case of his career due for trial in less than a week. Walter Elliot, head of the highly successful Archway Pictures, is being tried for the murder of his wife and her lover, and he refuses to agree to a continuance, even though Haller, new to the case, recommends it. This case, worth hundreds of thousands of dollars, soon begins to overlap with another of Vincent's cases--one taken pro bono, and not in any of Vincent's files or on his calendar--a complete "mystery case" to Haller. As he works, Haller relies on stalwart friends and associates, all of whom show their own personalities here as they support Haller and try to keep him from backsliding under stress. His first former wife, Maggie McPherson, a prosecutor, needs to be reassured that he is stable enough to be a father again to his daughter. His second former wife, Lorna Taylor, still works with him, though she is now living with Dennis Wojchiechowski (Cisco), Haller's investigator. Harry Bosch, who is investigating the Jerry Vincent murder for the police, frequently overlaps with Haller regarding issues in Vincent's cases, and they occasionally meet. Though they are alike in many ways, their hostility is often palpable. As Haller looks for the "magic bullet," the "get-out-of-jail-free" card that would clear Walter Elliot of a double murder, he must explore issues of bribery, jury tampering, fraud, police misconduct, organized crime, legal malpractice, federal crime, and even international crime--not to mention murder, including potentially his own. The novel, written in exceptionally clear prose, keeps all the complications from becoming overwhelming as the author recreates the legal one-upsmanship of a case going to trial. Connelly draws the reader in and increases the tension by making him/her an "expert" on the legal importance of events to the Elliot case. Exciting, beautifully crafted, filled with non-stop action, and always centered on achieving justice, this novel is completely satisfying--one that has it all. n Mary Whipple The Lincoln Lawyer :
Trustpilot
Copyright © 2022 Thriftbooks.com Terms of Use | Privacy Policy | Do Not Sell or Share My Personal Information | Accessibility Statement
ThriftBooks® and the ThriftBooks® logo are registered trademarks of Thrift Books Global, LLC