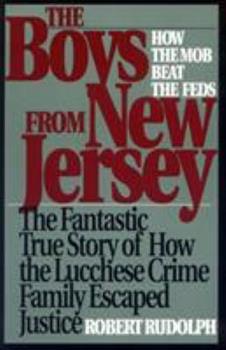 Boys from New Jersey : How the Mob Beat the Feds

Of all the extraordinary stories to emerge about the war on organized crime, none is quite so bizarre as the U.S. government's 1988 prosecution of the notorious Lucchese crime family, the mob that claimed to "own" New Jersey. Federal authorities called it the most ambitious legal attack ever mounted against underworld figures--a sixty-five-page indictment capping a ten-year investigation that would take out an entire organization, from godfather to...

Published by Thriftbooks.com User , 13 years ago
Hilarious-----and True!!! Better written, better styled than anything written by Jimmy Breslin or Murray Kempton. If a movie was ever made, danny deVito would be the star. I know of no other book more widely read in law enforcement circles than this. I know one law sch prof who made it required reading.

Published by Thriftbooks.com User , 19 years ago
Certainly worth the read, slow to start but when the story speeds up its pretty hard to put the book down.In a nutshell, the Feds put together what they think is a watertight case against Lucchese capo Anthony Acceturo's New Jersey crew, but get more than they bargain for when the case reaches the courtroom, due in no small part to Martin Taccetta's attorney, one Michael Crithley.(Taccetta being Acceturo's protege and successor).In a case that made history in the US, droning on for almost 2 years, the Feds roll out ex cons who have been planted in the Witness protection programm to put an end to thier one time partners in crime, only for Crithley to shoot them all down in flames, questioning the governments double standards in letting off convicted murderers and drug dealers,if they cut a deal with them,which sometimes might make you think that its the Feds on trial and not the Mob.One of the main characters in an out of sorts thug called Jackie Dinorsico, who represents himself in the trial, and somehow stumbles his way through the trial,upsetting anyone that stands in his path.(the Judge and fellow defense attorneys included),and quite often humouring them.Not your typical Mob read but definetly worth it, just to find out how 20+ mafia members and hangers on somehow managed to convince 12 weary srangers that it was the US government and not themselves were the bad guys after all.

Published by Thriftbooks.com User , 22 years ago
Forget about "The Sopranos" - this is the real thing -- The New Jersey mob at its gritty and funny best. I've read a lot of "true" crime stories, but this one had me turning pages with all the anticipation of a suspense novel -- while laughing at the real-life antics of "The Boys." It's a treat to read.

Published by Thriftbooks.com User , 22 years ago
This book nicely illustrates the powerful ways in which the modern mafia operates. It is an accurate account of how such an omnipotent organization avoids confrontations with the Feds, as well as ultimate prosecution. It is a gratifying, realistic and at times humorous book. It makes us come to the realization that the world is not what many have idealized it to be. With power, anyone can be a leader. This book is a MUST READ for anyone interested in modern organized crime!

I couldn't put it down

Published by Thriftbooks.com User , 22 years ago
When a friend of mine gave me this, I expected it to be another cliche-ridden book about the mafia. Boy, was I wrong. This is a really good account of how a very smart criminal defense lawyer turned a can't lose prosecution into a victory for some very interesting -- and not so bright -- ordinary citizens who just happened to be members of organized crime. I'm surprised this book has been out so long without being picked up for treatment on the big screen, with somebody like Kevin Spacey as the defense lawyer and Anthony Hopkins as the judge. Good gift for lawyers.
Copyright © 2022 Thriftbooks.com Terms of Use | Privacy Policy | Do Not Sell My Personal Information | Accessibility Statement
ThriftBooks® and the ThriftBooks® logo are registered trademarks of Thrift Books Global, LLC