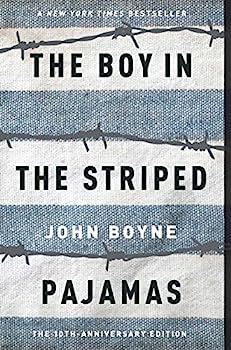 The Boy in the Striped Pajamas

Two young boys encounter the best and worst of humanity during the Holocaust in this powerful read that USA Today called as memorable an introduction to the subject as The Diary of Anne Frank."... This description may be from another edition of this product.

Published by Jenilynne , 1 month ago
Book is still readable however it is heavily marked and underlined and scribbled in ink on the inside. I am a bit disappointed. It was supposed to be in good condition but this looks like it was a school handout that someone is trying to sell off.

Published by Destiny , 12 months ago
This was such an amazing read! This was told in the views of a little boy whose father was a Nazi and he befriends a Jewish boy. It will leave you heartbroken! A must read!

Published by indie , 1 year ago
I ordered good condition which I guess it’s good but it could have been better, for the condition I ordered. Still good tho

Published by Sam , 1 year ago
Bought the “very good” version. It was in great condition almost like new with just some minimal scratches on the covers but it was barely noticeable. Overall great book with some amazing ideas. I would 100% recommend it to anyone.

Book has handwriting/highlighting in it, disappointing but still in good enough quality to be read,

Published by bri , 2 years ago
Beautifully written about awful times through the eyes of a child.

Published by Tia , 3 years ago
I have read many books on the holocaust. I loved the perspective .

Child's understanding of the holocaust

Published by Thriftbooks.com User , 4 years ago
Think my jaw actually dropped towards the end. Good understanding of the holocaust from a child's perspective.

Published by Thriftbooks.com User , 5 years ago
Keep your tissues handy.

Published by Thriftbooks.com User , 14 years ago
Books about the Holocaust are never easy to read. Some are downright terrifying and some make the reader nauseous. This book however approaches this period in history from a new and interesting angle and tells a tale of what might have happened, and in doing so opens up these stories to a whole new generation of readers. The book was originally marketed as a children's book, and then remarketed as adult fiction because of the content. The author claims it is just a book, and soon it will be a major motion picture due out in the fall of 2008. This is the story of two boys who lose everything they hold dear, yet the reality of their loss is completely different. Bruno's life is changed when his father is given a new job and they move from their five-story home in Berlin to a new home in the country that is only three stories tall. He has lost his 3 best friends in life, and his home with the banister and the attic window that looks out over all of Berlin. His new bedroom window looks over small huts in a fenced-in area where everyone wears striped pajamas. One day while being rebellious and doing what he should never do, he walks along the fence and meets a boy with whom he shares a birthday. Shmuel and Bruno meet most days and sit on the opposite sides of the fence and talk. As their friendship grows Bruno's youthful innocence is challenged. The novel is told in the third person narrative, but told from a nine-year- old's perspective. Though the reader knows that the story takes place at Auschwitz, Bruno cannot pronounce it, and misunderstood the name from the beginning. Yet in not naming the place the author leaves the story as a much broader tale. This book is extremely well-written; it takes the reader to a place and time we should never forget, and it reminds us of the human element in all stories. John Boyne has written a book that could become required reading for all school children, and maybe all adults should read it also, lest we forget. So pick it up and walk with Bruno and Shmuel as they develop a growing friendship just sitting and talking through a barbed- wire-topped chain link fence. (First Published in Imprint 2008-05-02.)

This one stands apart, for many reasons, should be on anyone's "must read" list

Published by Thriftbooks.com User , 14 years ago
I've read many books that fall into the "Holocaust literature" category. This one may actually be a book that is written in a style that COULD be read by a child but should be read by adults. Whether it is suitable for children depends on how sensitive your child is- and how well you think he or she could handle some very graphic details. They aren't "graphic" in the sense of being spelled out in detail but the reader's imagination can fill in the blanks. At age 9, this book would have been far too intense for me - and the main character in this one, Bruno, is age 9. The author used a technique which was brilliant, taking readers into the mind and thoughts of a child whose father work for the "Fury" (the Fuhrer) and who is sent to live in Out-With (Auschwitz), on the safe side of the fence, in an actual home. The novel is labeled "a fable" and I think this was a wise choice by both author and publisher. After all, no one knows exactly how a 9 year old son of a German officer would think and young Bruno seems remarkably naive sometimes. But just as light sets off shadows more vividly, I think his exaggerated innocence allows readers to experience the horrors of Auschwitz that much more. For that reason, I don't think the accuracy of Bruno's character is all that important. The effect on the reader (THIS reader, anyway) is profound and deep. After moving to Out-With (Auschitz) Bruno meets a boy "on the other side of the fence", one who is the same age, a lad named Schmuel. At first Bruno is envious of the boy who gets to wear striped pajamas all day and who seems to have lots of companions. On Bruno's side there are few playmates and he doesn't realize that he has so much compared to Schmuel. There is a sudden twist in this tale and I can't write about that. I will say it is the one reason adults should read this book before sharing it with children. The book isn't quite like any other of this type I've read, not even The Diary of Anne Frank. Each chapter has a simple headline (Bruno Makes a Discovery, Bruno Tells a Perfectly Reasonable Lie) that reads like something a child could write. So do the words of each chapter and I think the child's voice should speak to both the child and adult residing in readers. It certainly did for me! You'll be haunted by this one. If you get the edition with a Reading Guide included, you will find all sorts of extra features, includng an interview with the author, John Boyne.

The Boy in the Striped Pajamas

Published by Thriftbooks.com User , 14 years ago
This new book on the Holocaust would make an excellent book for any class where Holocaust is being taught for the first time. The book begins from the point of view, not of the Jews, but from the point of view of the son of a high Nazi official who has come to be the commandant of Auschwitz. The son, left on his own, and knowing nothing about what his father does, begins out of loneliness to go for walks. He finds the camp and becomes friends with a boy wearing "striped pajamas." The ending of the book left me with the word "Wow" and the need to start discussions with adults and students alike.

Fable or not, an evocative piece of literature

Published by Thriftbooks.com User , 15 years ago
While there has been much debate over the credibility of the historical facts in the story, I don't find this of particular personal relevance. The book tells the story of 9-year-old Bruno who lives in high society Berlin. Seen through his eyes, the reader is taken into a world that Bruno cannot make sense of (his father wears a uniform, they have the "Fury" over for dinner, and they unexpectedly move to "Out-With") and that he can only comprehend in the way a child can. While 9 might be a little old for a child to be this naive, the point of the story is to bring us into a subject matter that will always be difficult to understand. By putting us on the other side of the fence, on the side where the Nazi party and their children live, we are brought into a world that is scary for young Bruno although not nearly as scary as it is for his friend Shmuel, the title character on the other side of the fence. To analyze the historical inconsistencies doesn't appeal to me as, the granddaughter of Holocaust survivors, I didn't feel like the book did a disservice by placing Bruno with his father rather than in the Hitler Juden. The book is remarakably touching and simple, yet contains some beautiful sentences evocative of a writer who successfully gets to the heart of human evil and cruelty. I would recommend this book to anyone interested in reading about the Holocaust, whether young or old, whose tale of a friendship speaks volumes about the what we as humans choose not to see.

Published by Thriftbooks.com User , 15 years ago
My Number One Reading Consultant John from Matilda's book store in Mount Waverley recommended this book to me without giving any hint of what the story was about which I am grateful for since the book speaks for itself. It is about a 9 year old German boy named Bruno who has to move from Berlin to the countryside because his Father has a new position . Brunos sees a fence and buildings and a lot of people wearing what he calls "striped pyjamas" but he does not realize that he is caught in the middle of the Holocaust of Word War Two at the Auschwitz Concentration Camp and the one friend that he makes is of the Jewish Race.This book has a lot of significance for me because my Mother grew up in Germany at the time when this book is set and she has told me that like Bruno a large percentage of grown up German people were unaware of the horrors that Jews in Wartime Germany had to endure. This book is told with the Innocence of Youth and yet is dark and compelling at the same time. This book was so rivetting that I finished it in one afternoon sitting. Thanks again John for yet another great book.
Trustpilot
Copyright © 2022 Thriftbooks.com Terms of Use | Privacy Policy | Do Not Sell or Share My Personal Information | Accessibility Statement
ThriftBooks® and the ThriftBooks® logo are registered trademarks of Thrift Books Global, LLC