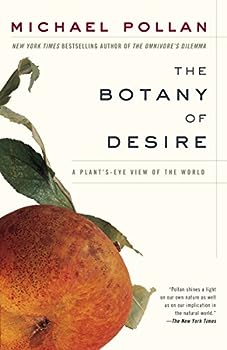 The Botany of Desire: A Plant's-Eye View of the World

This description may be from another edition of this product. The book that helped make Michael Pollan, the New York Times bestselling author of How to Change Your Mind , Cooked and The Omnivore's Dilemma, one of the most trusted food experts in America Every...

Soft-spoken, but packs a punch

Published by Thriftbooks.com User , 20 years ago
Pollan makes the rather striking point in the Introduction that we and our domesticated plants are involved in a coevolutionary relationship. We use them and they in turn use us. The bumblebee thinks that he is the "subject in the garden and the bloom he's plundering for its drop of nectar" is the object. "But we know that this is just a failure of his imagination. The truth of the matter is that the flower has cleverly manipulated the bee into hauling its pollen from blossom to blossom." (p. xiv)And so it is with us. There is no subject and no object. The grammar is all wrong. We plant and disperse the apple, thinking we act from our volition, yet from the apple's point of view, it has enticed us through its bribe of sweetness to further its propagation. It has played upon our desire. The same can be said of every other plant "domesticated" by humans. As Pollan points out, from a larger point of view our farms and gardens are just another part of the "wild" environment. And we, too, are part of that environment--increasingly a most significant part. The plants, and of course the cows, the ants, the roaches, the dogs and the cats, adjust to the environment, or they don't. The ones that do will flourish. Those that don't, the mighty oak, perhaps, the hard wood trees of equatorial jungles, the tigers and the condor, that cannot, will go the way of the dodo.This idea is not original with Pollan, of course, but nowhere have I seen it presented so convincingly. In a sense we are not the doer, we are the done. Pollan illustrates his thesis in four chapters on the apple, the tulip, cannabis, and the potato.In the chapter on tulips and the tulip mania we learn that we are probably hard-wired to love flowers. Why? Because "the presence of flowers...is a reliable predictor of future food." (p. 68) We love what is good for us. We find beauty in that which nourishes. Pollan adds that "recognizing and recalling flowers helps a forager get to the fruit [that is to come] first." (p. 68) I might add that our love for little animals is both in their resemblance to our children and (hidden from our consciousness) their potential nutritional value in a time of famine. One might watch on PBS's Nature series to see how lovingly the big cat doth lick its prey.In the chapter on marijuana Pollan admits to growing the noxious weed in his garden among the potatoes andthe tulips, but incurs paranoia since such horticulture is against the law. He points with restraint to the absurdity of the anti-marijuana laws, to the unconstitutional seizure of property by the marijuana police, etc., but one senses that he's pulling his punches. Or perhaps he feels that something is gained by using a quiet voice. He goes to Amsterdam and finds out just how potent the new marijuana has become. He views an indoor marijuana grow room and sees how sinsemilla is produced while noting that cannabis has become America's number one cash crop. (p. 130). He also notes th

Some of the Most interesting Botany You'll Ever Read.

Published by Thriftbooks.com User , 20 years ago
Two different people sent me copies last week of Michael Pollan's book, The Botany of Desire. I'm a writer (Allergy-Free Gardening, from Ten Speed Press) myself and a lifetime horticulturist and I guess they figured I'd appreciate this book. They were right too. I found this book extremely hard to put down. Pollan is a writer first and a botanist second but he is remarkably observant about horticultural matters. He is also unusually talented at explaining complex ideas and he does so in a way that is fresh, fun, often funny, and suprisingly profound. Pollan's section on Johnny Appleseed alone is worth the price of the book. Here Johnny is a multi-dimensional character, one not just eccentric, but a shrewd fellow with great vision and considerable human frailty. The Botany of Desire is chiefly the history of the tulip, apples in America, cannabis, and the potato. This may not sound like the recipe for a really satisfying read, but in Michael Pollan's more than able hands, it certainly is. If you enjoy gardening, history, or just plain old very decent writing, I expect you too would appreciate this excellent book.

Plants and Humans Influence Each Other for Mutual Benefit!

Published by Thriftbooks.com User , 20 years ago
"What existential difference is there between the human being's role in this (or any) garden and the bumblebees?" "Did I choose to plant these potatoes, or did the potato make me do it? With profound questions like these, Michael Pollan pollinates your mind with a new world view of our relationships with plants, one in which humans are not at the center. The book focuses on four primary examples of how plants provide benefits to humans that lead humans to benefit the plants (apples for sweetness, tulips for beauty, marijuana for intoxication, and the potato for control over nature's food supply). You will learn many new facts in the process that will fascinate you. The book's main value is that you will learn that we need to be more thoughtful in how we assist in the evolution of plant species.The book builds on Darwin's original observations about how artificial evolution occurs (evolution directed by human efforts). So-called domesticated species thrive while the wild ones we admire often do not. Compare dogs to wolves as an example. Mr. Pollan challenges the mental separation we make between wild and domesticated species successfully in the book. The apple section was my favorite. You will learn that John Chapman (Johnny Appleseed) was a rather odd fellow who was actually in the business of raising and selling apple trees. He planted a few seeds at the homes where he stayed overnight on his travels. Mr. Chapman had apple tree nurseries all over Ohio and Indiana, which he started 2-3 years before he expected an influx of settlers. Homesteading laws required these settlers to plant 50 apple or pears trees in order to take title to the land. And these apples were for making hard apple cider, not eating apples. He was the "American Dionysus" in Mr. Pollan's view. Apple trees need to be grafted to make good eating apples. Chapman's trees produced many genetic variations, which are good for the species. Apple trees became more narrow in their genes after other sources for alcohol and sweetness became available (from cane sugar). Now, the ancient genes of apple trees are being kept in living form from Kazakhstan, before they are lost due to economic development. Tulips were the source of the famous Tulipmania in Holland. Rare colors occurred due to viruses. Those became extremely valuable during the tulip boom market in the 17th century. Now, growers try to keep the viruses out and we have much more dull, consistent species. We have probably lost much beauty in favor of order in the process. The intoxicants in marijuana are probably caused by toxins that the plants make to kill off insects. Because the plant is a weed, it grows very rapidly. There is a hilarious story about the author's experiences in growing two plants that you will love. As the antidrug war progressed, marijuana became a hothouse plant and was bred and developed to grow much more rapidly under humid, high-light conditions indoors. You will read about mod
Copyright © 2020 Thriftbooks.com Terms of Use | Privacy Policy | Do Not Sell My Personal Information | Accessibility Statement
ThriftBooks® and the ThriftBooks® logo are registered trademarks of Thrift Books Global, LLC