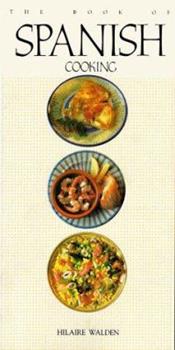 The Book of Spanish Cooking

Indulge Spanish dishes made from ingredients with centuries-old traditions. The Book of Spanish Cooking brings the reader an enticing selection of delicious appetizers, plus main courses, vegetables and desserts, in a varied collection of more than 100 recipes.

Published by Thriftbooks.com User , 18 years ago
In its roughly 50 parts, all written by experienced cooks and cook book writers, HP Books' "The Book of ... Cooking" series takes you to the cuisines of various regions of the U.S. and around the world; all in easy to follow, well-explained recipes. This installment, the Book of Spanish Cooking, starts with a brief introduction into the basics of the Spanish cuisine, and then presents recipe suggestions for all major courses, from tapas and soups to sweets, sauces, sides and drinks. Special chapters are dedicated to egg dishes, fish, poultry and game, (red) meat, rice, legumes and vegetables. Classics such as churros, empanada, gazpacho, pisto manchego, paella and sangria appear next to variations on classic recipes (tortilla with red pepper, artichoke and ham tortilla, orange flan, tuna croquettes) and unique dishes such as chicken with sherry or with walnut sauce, mullet with anchovy sauce, pork in cider and orange, and quail with grapes. From apple cake to zarzuela, this collection of recipes, while not all-encompassing, is a great introduction to the richness of the Spanish cuisine - and at a relative bargain price, to boot. Also recommended: This series' installments on North African, Mediterranean, Greek and French provincial cooking, antipasti, pasta, light pasta sauces, and pizzas and Italian breads. Also recommended: Around the World Cookbook Moosewood Restaurant Cooks at Home: Fast and Easy Recipes for Any Day Sundays at Moosewood Restaurant: Ethnic and Regional Recipes from the Cooks at the Legendary Restaurant (Cookery) Madhur Jaffrey's World Vegetarian: More Than 650 Meatless Recipes from Around the World On Cooking: A Textbook of Culinary Fundamentals (4th Edition) Textbook only Joy of Cooking: 75th Anniversary Edition - 2006

Lots of tasty recipes to enjoy!

Published by Thriftbooks.com User , 19 years ago
Great collection of tasty recipes with photos for every recipe! The introduction explains spanish food customs & ingredients. Lots of vegetarian recipes like "Rice with Chickpeas," "Fideua," "Bell Pepper & Onion Tart," "Potatoes with garlic sauce," "White soup with grapes" and "Gazpacho." Of course there are still lots of meat recipes such as "Quail with Grapes," "Duck with Pears," "Lamb Chilindron," "Shrimp stuffed Eggs," "Empanada" and more. It's worth adding to your cookbook collection!

Published by Thriftbooks.com User , 21 years ago
This book has easy to follow directions, pictures which show the process step by step, and contains ingredients readily available in the United States.
Copyright © 2020 Thriftbooks.com Terms of Use | Privacy Policy | Do Not Sell My Personal Information | Accessibility Statement
ThriftBooks® and the ThriftBooks® logo are registered trademarks of Thrift Books Global, LLC