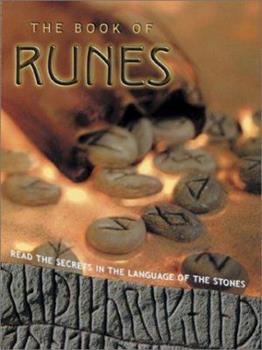 The Book of Runes: Read the Secrets in the Language of the Stones

Readers learn to decipher and harness the magic of the ancient Nordic runes "Feogh" symbolizes financial gain and status . . . "Thorn" stands for protection, defense, and caution. These and each of the runic alphabet s many other magic symbols have special meanings all their own. Author Francis Melville presents directions for making amulets and talismans to invoke the power of Norse gods. He describes the method of conducting readings with rune stones...

Nicely illustrated Introduction to the Runes

Published by Thriftbooks.com User , 11 years ago
If you have ever been mildly interested or curious about the runes but have not given them a great deal of thought, this is the book for you. A short, fairly accurate and beautifully illustrated introduction to the FUTARK. The books format reminds me of an enlarged version of those little educational books that they had at the checkouts of the grocery store when I was a kid. Most of the, "fluffy bunny new age tripe" has been avoided in this work, which is greatly appreciated. I was however, seriously annoyed by the use of a "Viking" horned helmet, (contrary to Hollywood there is no evidence what so ever that they were ever used by the Northern Europeans), and the photo of a North American Bison under the Uruz rune section. At least it didn't go into any, "Blank Rune", drivel like some other rune books out there. Nice addition to my library even though it is a very basic work on runes. If you have a fair amount of runic knowledge I wouldn't suggest it unless you just like collecting rune books. As I stated earlier, the photos and Illustrations are very well done and this combined with the relatively low price of the book make it a bargain. Recommended.. Spence the Elder "Sic gorgiamus allos subjectatos nunc" -M. Addams-

A rune book for your coffee table.

Published by Thriftbooks.com User , 12 years ago
This is what I like to call a "Coffee-Table" book. It has lots of brightly colored pictures which completely dwarf the text and is a nice thing to leave on your coffee-table for your friends to browse through when you have them over for tea and crumpets. Sure, most Rune Workers will need much more depth than this book provides and it offers no insights to the runes that cannot be found elsewhere, but it manages to avoid most of the usual blunders that commercial rune books tend to make and it highlights some important points of the Runic magical tradition. And it serves as a great gentile introduction for acquaintances who wonder why you like to throw wood chips with funny markings around every month. So I like it!

Published by Thriftbooks.com User , 12 years ago
I bought this book to replace the book that I had with my set of runes. I misplaced it or lost it in moving and this book is a wonderful replacement.

A decent and colorful intro for Runes

Published by Thriftbooks.com User , 13 years ago
The Books of Runes by Francis Melville is a colorful but basic introduction to Runes. He starts with some history, then lead into Nordic mythology, which was a nice touch, and then on to the various runesets and the meanings of the runes themselves. I found his interpretations of the various runes to be fairly good, though some of the strange associations he makes for each rune (plants, trees, animals, gemstones?) struck me as unnecessary and questionable as to origin, if not overly new-agey. Nonetheless, these correspondences only appear in a tiny table for each rune, easily ignored or overlooked, and they don't detract from the main text and overview of the rune meanings themselves. While I don't agree with absolutely every thing in the book (I personally see no connection between Hagalaz and Ymir), no two rune books (or authors) are alike and everyone will have some varying degree of personal interpretation anyway. He touches only briefly on bindrunes, dedicating two pages, (I would've like to see more) but more importantly, IMO, is the virtual lack of common modern day rune weirdness, such as "runic yoga". Overall, a fairly solid but basic work, a good addition to my library of Rune books.

Good book for the meaning of the runes

Published by Thriftbooks.com User , 18 years ago
Melville explains well the meanings of the runes and what they are related to. He also gives a brief background into the Gods of the old Germanic peoples. A very well informative and well researched book. However, I think he lacks a little on the part of runecasting, runemagic, and runebinds, But there is enough there to get started if you are a beginner. Very well worth the time and money to read the book.
Trustpilot
Copyright © 2022 Thriftbooks.com Terms of Use | Privacy Policy | Do Not Sell My Personal Information | Accessibility Statement
ThriftBooks® and the ThriftBooks® logo are registered trademarks of Thrift Books Global, LLC