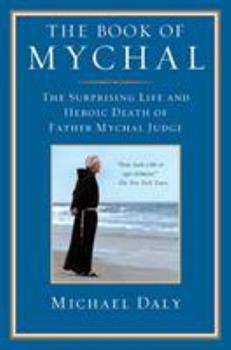 The Book of Mychal: The Surprising Life and Heroic Death of Father Mychal Judge

The inspiring story of New York Fire Department Chaplain Father Mychal Judge His death certificate bears the number one. As chaplain to the Fire Department of New York, Father Mychal Judge was officially the first to go. A loving priest with a gift for the gab-gregarious yet humble, a healer with the ability to wipe away a widow's tears and put a smile on a fireman's face. And on September 11th Father Mike rushed to the fires at the World Trade Center...

Published by Thriftbooks.com User , 12 years ago
This book answers the question: What makes a man a man? Read the biography of a man who devoted his life to others and kept a part of himself secret, a secret that if revelaed may have isolated him from some of the very people he elected to help. How does one define a good man? Read the story of Mychal Judge and decide for yourself.

A Life of Faith, Hope & Charity

Published by Thriftbooks.com User , 13 years ago
The writing was superb. But the life of Mychal Judge surpassed anything that I could have ever envisioned. This priest was the true definition of the word, Catholic, which means universal. His priesthood, his faith and his life were all embracing, all encompassing. He listened. He did not judge. He understood. As a Franciscan, he knew humility and poverty intimately and he owned them. The goodness of his life allowed him to interact with people of all faiths. He was as comfortable in the White House as he was in the slums of New York. All people were equal. He befriended and respected those of different faiths. He befriended those who were no longer practicing any religion. He did not judge them; he honored and treasured them for their own innate goodness. He had trials and tribulations and he met them head-on while he monitored a flock that he adopted. Spending hours at the bedside of firemen, comforting their families, administering to the victims of AIDS when others shunned them, offering solace to strangers who became his friends, seeing goodness in others - these are just the highlights of this saintly man's life. I cried and yet I was comforted. Michael Daly tells of the tragedy and he blends humor and laughter throughout the book. Father Judge always balanced his ministry with laughter. Michael Daly is an excellent writer. However, his admiration for Father Mychal gave this book "heart." If you do not read another book for the rest of the year, read this one. It will restore your faith, hope and charity towards one another. I recommend this book highly.

Beautiful story about an amazing man

Published by Thriftbooks.com User , 13 years ago
This book brought tears to my eyes. We know that Mychal Judge's life was tragically ended on September 11, 2001 but this book told his life's story in a very real and touching way. The lessons of Mychal Judge's life will stay with you for a lifetime.

A labour of love

Published by Thriftbooks.com User , 13 years ago
That's what this book clearly is - a labor of love, a probing biography by a Daily News columnist. The author delves deeply into Judge's Irish upbringing, the Catholic church, the Fire Dept, and New York City politics. A Pulitzer-worthy book.

Published by Thriftbooks.com User , 13 years ago
Daly, Michael. "The Book of Mychal: The Surprising Life and Heroic Death of Father Mychal Judge", Thomas Dunne Books, 2008. A National Hero Amos Lassen Father Mychal Judge became a hero after his death. He died while he was helping victims at the World Trade Center after the terrorist attacks of September 11, 2001. He was the chaplain for the New York City Fire Department and he soon became the supreme symbol of those who put their lives at risk so they could help others and he paid the highest price. He was loved by his fireman and was always ready to listen to anyone who needed to talk. He not only was minister to firemen but to gay New Yorkers as well even though many of his firemen had no idea that he was gay and did not learn that until he was dead. Father Judge had problems with reconciling his private life with his public life and this was discovered in a journal he began keeping in 1999. We read that he yearned to speak out but he felt that coming out would cost him his ministry, his friends and his standing in the Catholic Church. Michael Daly, who was Judge's friend and who wrote this book, had access to the journals and gives us the thoughts of Judge. Judge's life was gripping from being a youth in Depression Brooklyn to his Catholic upbringing. The last section of the book hits hard as it deals with September 11 and the days following. I love the way we get to see Father Judge as he tries to balance his work with the fire department and his life as a gay man especially during the 1990's when New York City was engaged in a war between the church and the gay community. Daly gives us a peek into Judge's private life as well and with great sensitivity. We read of his involvement with the AIDS crisis, when he bucked his church's official policy on homosexuality. We also learn of the priest's ten year love affair with a much younger man but Daly says that it was never consummated because of the Church. What makes the book so special is reading about Judge's inner thoughts and turmoils as well as the love his fireman felt for him. He was quite a man and Michael Daly has done both the man and his memory justice.
Trustpilot
Copyright © 2022 Thriftbooks.com Terms of Use | Privacy Policy | Do Not Sell My Personal Information | Accessibility Statement
ThriftBooks® and the ThriftBooks® logo are registered trademarks of Thrift Books Global, LLC