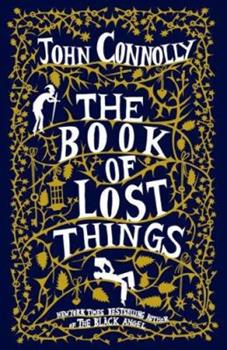 The Book of Lost Things

The bestselling author of The Black Angel offers a creative coming-of-age story about one boys journey into adulthood, combining dramatic themes with edge-of-your-seat suspense and a fantastical imagination.

Published by TS , 1 month ago
This book is good for adults and young adults- a journey in thought and story line.

Published by Ladyethyme , 6 months ago
A story in a story, of real heartbreak, child psychology, then a trip to fairy. But not Disney rewritten fairytales. More like the actual, original tales, meant to be gory, scary, and teach lessons. Anyone whining about how this book ‘isn’t for kids’ or is ‘grotesque and full of violence and sadness 1) didn’t look where they picked this book up from…hint: not the kids section and/or 2) has no idea fairy tales existed before Disney.

Very Dark, Gruesome and Descriptions of Human Mutilations of children.

Published by Sherry , 9 months ago
There was absolutely nothing that I liked or enjoyed in this book. There was death, sadness and descriptive horrors in every chapter. I would never recommend this disgusting book to anyone!

A work of art for your imagination!!!

Published by Thriftbooks.com User , 4 years ago
An absolutely beautiful book. It captivated me from beginning to end. I highly recommend this for anyone who is into dark fantasy. This book was amazing!!! Hit me in the "feels" pretty hard.

Published by Thriftbooks.com User , 14 years ago
How many avid readers just like us have used books as a retreat from life's difficulties. That's exactly what David does, when his mother dies, his father remarries, and a new little half brother enters the scene. WWII is heating up, and when a German bomber goes down in flames, landing in the family garden, David finds that the weirdest characters and places from his adventure tales are real. And dangerous. His life will never be the same, not even if he manages to escape with his life and return to his family. An allegory on war and on conquering one's fears, The Book of Lost Things is anything but didactic. On the contrary, it's a perilous quest in the classic sense, full of the stuff of nightmares and horror stories. No cute little elves or fairies in David's new world, only plenty of slavering werewolves, terrible trolls, and horrific monsters which take shape in accordance with his own deepest dreads. The way in which he handles these unimaginable challenges forms the core of this story, which is magical in content but realistic in its truths. Recommended highly to readers of skillfully written fantasy, especially if interested in "the uses of enchantment".

Published by Thriftbooks.com User , 16 years ago
In this first departure from mystery novels (discounting of course his excellent collection of deep and dark stories from a previous book titled Nocturnes) John Connolly manages to meld illogical with logical and to remind us all that what may seem real is just another side of a coin conveniently labeled nightmare and fantasy. This tale builds slowly (as it should and during the brief passage of the first five chapters) through the eyes of a twelve year old boy named David. But the tale soon picks up speed on the doorstep of Chapter six. And then... watch out! The source for most of the tales encountered by David, during his journey through an alternate but un-named land, is the Brother's Grimm. And the structure itself lends closely to Lewis Carroll's tales of Alice's adventure in Wonderland and her journey Through the Looking Glass. But we cannot omit L. Frank Baum from this porridge of evil but sublime. His imprint is there and presiding with more than a tip of the hat to Dorothy and her journey to Oz and to the `Magnificent Wizard' (and a reminder of at least a couple of her companions, along the way through that journey). But don't think I'm going to say this tale is a `copy' of any of the above! The story is wholly original in the telling... and then some. It should be said (and already has been) that this rendering is not for children. And it is not for the faint of heart. If anything, the story can be viewed as cautionary fairy tale melded with contemporary warning to the likes of Ed Gein and John Wayne Gacy (and Gacy especially, when `feeling' the creepy crawly `below-world' of the crooked man and some of his personal culinary delights). Both of these monsters could easily have existed in David's alternate world. And wasn't that, after all is said and done, the original warning of the Brother's Grimm? Beware of that which seems innocent and pure because... it may be not!

Published by Thriftbooks.com User , 16 years ago
I've read all of John Connolly's other novels and love them. Only problem I have is that he can't write them quickly enough to satisfy my desire. (smile) Began 'Book of Lost Things' late last night and, like another reviewer, read it in one sitting. WHAT a story! WHAT a storyteller! The book held me from the very beginning with the books, the books talking, the life of books, the emotion of books! There was even a passage that brought a tear to my eyes, the passage about the boy discovering pictures of his mother as a young girl and realized she had an entire life separate from him. Since I've lost my own mother, and now have pictures of her as a girl I, too, went through that 'aha' experience. John Connolly reaches deep into the heart of us all, if we are receptive to him. This is a book for all those who believe in the life of books and the power of words. It is a book NOT to be missed and a book I hope earns every award possible. Trust me, if you have a heart, the ending will have you crying and the final pages will have you returning to read them again and again. He is truly a master storyteller and, to my mind, what better thing can one be? Mr. Connolly thank you, thank you for the enjoyment you bring to many of us. And, to the reviewer who said he read this story via download, why read it any other way? Because a download is NOT a book. There is something about a book, the smell, the feel ......the LIFE.
Trustpilot
Copyright © 2022 Thriftbooks.com Terms of Use | Privacy Policy | Do Not Sell or Share My Personal Information | Accessibility Statement
ThriftBooks® and the ThriftBooks® logo are registered trademarks of Thrift Books Global, LLC