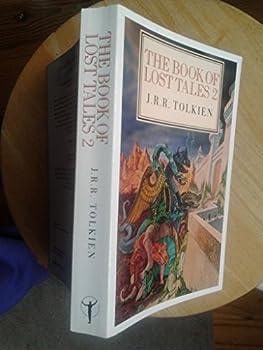 The Book of Lost Tales, Part Two (The History of Middle-Earth, Vol. 2)

"Tolkien devotees will no doubt rejoice. . . . Christopher Tolkien shows himself to be his father's son, delving into the question of Elvish genealogies. . . . He gives the reader histories of each... This description may be from another edition of this product.

Overview of The History of Middle-earth Series

Published by Thriftbooks.com User , 13 years ago
Collections of an author's work are often confusing, particularly when what the author has created is as complex as Tolkien's writings. Here's an overview of the twelve-volume History of Middle-earth, which was edited by his son Christopher Tolkien. Hopefully, it will help you select which book or books to buy. Keep something in mind. In the U.S. Houghton Mifflin publishes Tolkien's authorized works in hardback and trade paperback editions, while Ballantine Books publishes them as cheaper mass-market paperbacks. For some reason, Ballantine doesn't always make it clear that some of their titles are part of the same History of Middle-earth series as those published by Houghton Mifflin. If the title is the same, the content is the same. Which you buy depends on your taste in books and finances. I have copies of both. GROUP ONE, VOLUMES I - V, EARLY TALES These five volumes deal primarily Tolkien's writings before the publication of The Hobbit (1937) and The Lord of the Rings (1954-55). In them, Tolkien was struggling as a still unknown author to create his first history of Middle-earth. Vol 1 & 2, The Book of Lost Tales Part 1 ( 1983) & 2 (1984). The Book of Lost Tales was written during the 1910s and 1920s. Wikipedia describes it this way: "The framework for the book is that a mortal Man visits the Isle of Tol Eressëa where the Elves live. In the earlier versions of the `Lost Tales' this man is named Eriol, of some vague north European origin, but in later versions he becomes Ælfwine, an Englishman of the Middle-ages." Vol. 3, The Lays of Beleriand (1985). These are collections of poems, many of them incomplete, written between the 1920s and the late 1940s. Vol 4, The Shaping of Middle-earth (1986). As you might guess by the title, in this book Christopher describes how his father shaped his vision of Middle-earth from the primitive The Book of Lost Tales to early versions of The Silmarillion. This theme is taken up again in volumes X and XI. Vol 5. The Lost Road and Other Writings (1987). Along with other writings this volume includes Tolkien's drafts of a tale about time travel. Wikipedia describes it this way: "The Lost Road itself is a fragmentary beginning of a tale, including a rough structure and several intiguing chunks of narrative, including four entire chapters dealing with modern England and Numenor, from which the entire story as it should have been can be glimpsed. The scheme was of time-travel by means of 'vision' or being mentally inserted into what had been, so as to actually re-experience that which had happened. In this way the tale links first to Saxon England of Alfred the Great, then to the Lombard Alboin of St. Benedict's time, the Baltic Sea in Old Norse days, Ireland at the time of the Tuatha's coming (600 years after the Flood), prehistoric North in the Ice Age, a 'Galdor story' of Third-Age Middle-Earth, and finally the Fall of Gil-Galad, before recounting the prime legend of the Downfall of Numenor/Atlanti

"Who was Iluvatar? Was he of the Gods?"

Published by Thriftbooks.com User , 19 years ago
"The Book of Lost Tales, Part 1" is the first of two volumes containing the very first versions J.R.R. Tolkien wrote of the legends that ultimately formed "The Silmarillion". He began writing these stories during World War I, and his quest for perfection in their form and presentation was so rigorous that he was unable to publish any version of "The Silmarillion" before his death in 1973. His son Christopher edited "The Silmarillion" for publication and followed it up with thirteen more volumes of his father's writings on Middle-earth and Valinor: "Unfinished Tales" and the mammoth twelve-volume series "The History of Middle-earth," of which "The Book of Lost Tales" comprises the first two volumes."The Silmarillion" itself fails to appeal to many readers of "The Hobbit" and "The Lord of the Rings," and the thirteen tomes that followed it will have even less appeal to such readers (except perhaps for the four volumes that show how Tolkien went about writing LotR). However, for Tolkien aficionados the History series (affectionately abbreviated HoMe) is essential reading, and "The Book of Lost Tales, Part 1" is not only its beginning but one of its most important volumes. In it are found versions of the early stories of "The Silmarillion" (the birth of the Two Trees, the coming of the Elves to Valinor, the flight of the Noldoli or Gnomes, later renamed the Noldor by Tolkien, into exile, and the making of the Sun and Moon) which are far fuller than any later versions written by Tolkien, but the plots and nomenclature of which are still far from evolving into their final forms. Reading these stories is necessary to gain a full appreciation of the beauty of Valinor and of the Trees, the Elves' longing for which underlies all of Tolkien's work.Even those readers who dislike "The Silmarillion" should seek out this book in their local libraries for the sake of the first few pages of Christopher Tolkien's introduction, in which he explains the peculiar nature of "The Silmarillion" and why it inevitably has a different sort of appeal than that of "The Lord of the Rings," and thus may put off readers who enjoy the latter work. For Tolkien fans, "The Book of Lost Tales, Part 1" is highly recommended reading.

Behind the Scenes of Tolkien's Work

Published by Thriftbooks.com User , 20 years ago
The Book of Lost Tales shows you what wasn't included in the Silmarillion as well as some completely new stories, such as that of Eriol who learns of the origins of the Elves from his kinsmen. This shows you what Tolkien was conjuring up in the trenches during World War I. It's not really for those who are stuck only to the writing style of The Hobbit and The Lord of the Rings. You have to read the Silmarillion first before you can completely appreciate this work.

What You Didn't Read in The Silmarillion

Published by Thriftbooks.com User , 20 years ago
The Book of Lost Tales 2 tells the tales that you didn't exactly see in the final published version of the Silmarillion. It brings new insight to the background of how Tolkien wrote these stories while he was still conceiving the very beginnings of this magical world that would evolve into the Silmarillion and the Lord of the Rings. This is for anyone for wants to know about Middle-Earth and Valinor than was explained in Tokien's earlier published works.

An insite on the early Silmarillion

Published by Thriftbooks.com User , 23 years ago
In Christopher Tolkien's first volume in The History of Middle Earth series he brings to light his father's original conception of what became known as the Silmarillion. This volume deals with the central theme in Tolkien's early works where an Englishman named Elfwine (or Eriol in Elvish) is told the history of the Elves after finding the "straight road" to Tol Eressea. This book deals mostly with Elvish history before the coming of men, and the later histories can be found in another great book, The Book of Lost Tales 2. I would recommend this book, along with all twelve of the other volumes, to anyone who enjoyed Tolkien's works but found them to be too short and would like more information. Also, for those interested in making a career out of writing this series is a very good example of the hardship required to write a classic work of fiction.
Trustpilot
Copyright © 2022 Thriftbooks.com Terms of Use | Privacy Policy | Do Not Sell My Personal Information | Accessibility Statement
ThriftBooks® and the ThriftBooks® logo are registered trademarks of Thrift Books Global, LLC