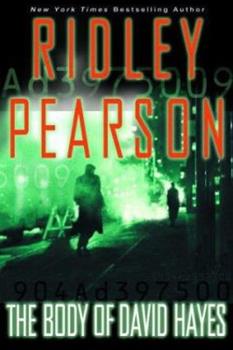 The Body of David Hayes

(Book #9 in the Boldt & Matthews Series)

Years ago, Lou Boldt's wife Liz had an affair with David Hayes, a young computer specialist at the bank where she is an executive. When Liz ended the relationship after reconciling with Lou, Hayes engaged in a daring embezzlement scheme. Now, years later, Hayes is trying to retrieve the money he hid for the Russian mob and contacts Liz to try to gain access to the bank's mainframe. Liz is torn between wanting to protect the bank and needing to protect...

If He's Dead, Where is the Body?

Published by Thriftbooks.com User , 17 years ago
Seattle Homicide Detective Lou Boldt is back in his ninth Ridley Pearson thriller and he's called to the assault of an old friend, BCI officer Danny Foreman. BCI stands for Bureau of Criminal Investigation, sort of Washington State's version of a local FBI. Foreman had been drugged and beaten and he tells Boldt that David Hayes is getting out of jail soon. Years ago Hayes stole seventeen million dollars from the bank where Lou's wife Liz is an executive. He also had an affair with her and that's hard for Lou to handle. The money was never recovered and it was a black mark on Foreman's career. Lou suspects Foreman of going after Hayes, but does he want to clear up an old case or does he want the money for himself. And there is a mean as nails Russian Mafia boss who is after Hayes as well, because it was his money that was stolen. And everybody seems to be after Lou's wife, because the money is apparently still in the bank's system, but only Hayes with his special software can get at it to wire it out and he needs Liz to gain access to the computer. So does the Russian Mafia guy. Then all of a sudden Hayes goes missing, leaving only a bloody crime scene in his wake. It looks like he's been killed, but there is no body. But someone is still after Liz. What gives? This is a nonstop, action packed thriller that won't let you go till you're finished. Mr. Pearson has given new life to Lt. Lou Boldt by showing us his personal and very human side. I just can't praise this book enough.

Published by Thriftbooks.com User , 17 years ago
The fast-paced and engrossing THE BODY OF DAVID HAYNES is the ninth outing for Lou Boldt. Boldt is somewhat of a legend in the SPD. He has the highest case clearance per average in the history in the Seattle Police Department. The book opens when he is called to a scene where friend and fellow officer is drugged and beaten on a stakeout of a trailer. Missing from the scene is David Hayes, the subject of the stakeout. Six years earlier David Hayes worked as technical computer support in the same bank where Lou's wife, Liz was an officer. During a dark time in the Boldt marriage, Liz had an affair with David Hayes and it almost destroyed the Boldt marriage. After the affair was over Hayes embezzled seventeen million dollars from the bank. He was caught, but the money was never recovered. Several parties are interested in retrieving the money now that Hayes is released from jail including the bank, police, and the original owners of the money, the Russian mob. David is on the run and he contacts Liz to help him get the money, which has been in limbo since his arrest. He is afraid for his life if he does not get the money back to the mob he stole it from. Liz is only one of few that has access to the codes to transfer the money. Events escalate until both the Boldt's marriage and their children are threatened. Boldt is put into the position of having to protect his family over the interests of the police department.From the very first page, the reader is drawn into this story. It is an extremely well plotted thriller that has the suspense building throughout the whole story until the very end. As good as the story is there is more at play here than just another good thriller which many books can claim to be. Where Pearson excels is at the finely tuned drawing of his characters as human beings, their frailties and their proclivity for secrets that come back to haunt them. The scenes between the Boldts are fraught with anger, hurt, tension and love as they try to get past wounds that could unravel their marriage. This is one of the best books I have read in a long time.

Another page-turner by Ridley Pearson

Published by Thriftbooks.com User , 17 years ago
The Body of David Hayes, by Ridley PearsonConflict grips the reader from the first page of Ridley Pearson's latest novel, The Body of David Hayes. Lou Boldt is called to the scene of an attack on an old friend of his, a cop with whom he and his wife Liz were close friends at one time. No longer, though, and this particular cop, known for his unorthodox approach to law enforcement, becomes a key player in Pearson's tense thriller.On one level, this novel examines the pain of betrayal in a marriage that has already had its share of trials. Several years ago, during her recovery from a body-wracking treatment for cancer, Liz Boldt had an affair with David Hayes, a bright young computer technician at the bank where she holds a high position. Not long after, Hayes went to prison for embezzling $17 million. Though six years have passed, Liz and Lou are still recovering from the guilt and damage. One day, out of the blue, Hayes calls Liz and asks for a meeting. Ashamed and afraid, she finds herself emotionally blackmailed into helping him retrieve the missing money. It turns out that he stole the money from the Russian mafia, and they have already tortured him for information. Consequently, the head of the Russian mafia knows about the affair that Liz and Boldt have struggled to keep a secret, and he doesn't hesitate to use Liz's position and expertise at the bank to gain access to the institution's mainframe computer. Liz has to tell Boldt the whole story, which tears open the still-painful wounds in their relationship. Boldt struggles to stand by her, and the tension builds as he finds a way to play his own colleagues, the mafia, the bank honchos, and the original thief off one another in his attempt to protect his wife and children.I was riveted by this relentless page turner and complex police procedural well past my bedtime, anxious to discover how the respectable and charismatic Lou Boldt could untangle the web of deception around his wife. Ridley Pearson has written another captivating thriller.

THE BODY OF DAVID HAYES by Ridley Pearson - Review

Published by Thriftbooks.com User , 17 years ago
Ridley Pearson does a masterful job of leading us into the lives of Liz and Lou Boldt as the bomb of David Hayes release, and Liz's long-ago infidelity, drops on their heads. Only if they work together can they hope to escape the fall out. From personal to professional crisis, both Boldts are stretched to their physical and emotional limits. This is nail-biting tension at it's best. Pearson's intricate plotting of smart moves and countermoves will keep you up all night. You don't want to miss this one!

Published by Thriftbooks.com User , 17 years ago
Six years ago, Lieutenant Lou Boldt's wife Liz had an affair with one of her co-workers and he found out about it. The man was convicted of embezzlement ($17 million worth) even though it was never found and in the mean time the Boldts put their marriage back together. Now David Hayes is out on parole and has gotten in touch with Liz who meets him to tell him she won't help him get the money. He sweet talks her into thinking about it but when she leaves him she goes to Lou and tells him everything.Although Lou is very angry, he holds his emotions in check because he knows there are very dangerous people who want to use Liz to get the money from a con artist to a Russian Mafioso to an over zealous police man. They only have a few days to get the money because the bank is merging with another bank and the way David set the system up, the money will be lost forever once the two financial institutions merge Law, Liz and a few trusted friends race against time to outsmart the thieves without risking their lives and their jobs.Once again Ridley Pearson writes a wonderful crime thriller that is so mesmerizing the audience will read it in one sitting. The readers obtain an up front and personal look into the lives of the Boldts as they deal with guilty consciences and a crisis that could destroy their marriage. THE BODY OF DAVID HAYES is a tremendous tale that deserves best seller status.Harriet Klausner
Copyright © 2020 Thriftbooks.com Terms of Use | Privacy Policy | Do Not Sell My Personal Information | Accessibility Statement
ThriftBooks® and the ThriftBooks® logo are registered trademarks of Thrift Books Global, LLC