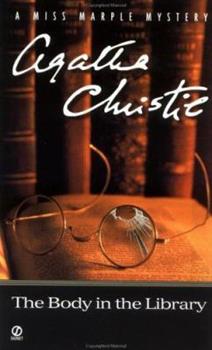 The Body in the Library

(Book #2 in the Miss Marple Series)

A beautiful but dead blonde is discovered in the library of Gossington Hall. And only Miss Marple can read the clues to find the killer.

A great mystery, one of the best ones ever written!

Published by Thriftbooks.com User , 16 years ago
When the body of a murdered young woman is found in their library, the Bantry's bring in their old friend, Jane Marple. There's a mystery within a mystery here: who is the murdered girl, and how did she get from where she was last seen to the Bantry's library? There are suspects galore, but only one person can possible get to the truth - Miss Marple! Jane Marple was the literary creation of that most famous of English mystery writers, Agatha Christie (1890-1976). For those of you unfamiliar with Miss Marple, she was your stereotypical elderly spinster-lady, who loves to gossip and grow her flowers. But, even more, she has a razor-sharp mind that she uses to solve mysteries, using her own brand of lateral thinking that allows her see clearer than anyone else around her. This is actually Agatha Christie's third Miss Marple novel, written in 1942. (The first one was The Murder at the Vicarage (1930), and the second one was Sleeping Murder, which was written in 1940 but locked away to be published after Ms. Christie's death in 1976.) Overall, I found this to be a fascinating read. If you love a good mystery, then get this book - it is a great mystery, one of the best ones ever written. I give this book my highest recommendations!

I Would Be Honored to Die in a Library

Published by Thriftbooks.com User , 17 years ago
This is the third Jane Marple book, but the first that I've read. I read this edition (Pocket book, 1970), and I was attracted to the initial romanticism of a dead body in a private library. Libraries are dark and notoriously eerie. The book starts off hilariously, but quickly becomes an interesting investigation that shakes up a bourgeoise English town. I was suprised at how quiet Miss Marple is, and how much she sort of disappears into the background. It isn't until the end that she even begins raising her voice to get some answers. The investigation itself is nothing new. People are questioned and the reader is led to believe the facts fit together. Miss Marple, of course, provides the fresh insight that ultimately twists everything around. "Why didn't I think of that?" becomes the embarrassing thought in every policeman's -- and reader's -- minds. Unfortunately, this being the third Christie book I've read, I didn't get that thrilling feeling of following a murder case in an exotic locale. For this, I recommend And Then There Were None, or Murder on the Orient Express. Also, I've come to realize that, as a reader, I prefer multiple murders, serial killings, and inevitable doom. In The Body in the Library, we have nearly three murders, but I wanted more! The book itself is an extremely easy and quick read, making for a great summer/travel read. My dictionary dash included meretricious (89) and prevaricate (133).

Published by Thriftbooks.com User , 19 years ago
As a teenager, I devoured one Miss Marple mystery after the other, feeling all the time slmildly uneasy for wasting my time on such fluff. But as I grow older and read more and better, and as I'm less influenced by the opinion of the powers that be, Agatha Christie grows in my mind.Miss Marple is one of the most popular literary figures of the 20th Century, and yet she does not have the literary status of Sherlock Holmes. She's not required reading in high school literature courses, and she should be.Agatha Christie created an entire litererary genre, which is not the same as the genre created by Conan Doyle (whose unabridged Sherlock Holmes I'ver read with great pleasure cover to cover three times). I think it's fair to say that in some significant way, her mysteries are more similar to the novels of Jane Austen than to those of Conan Doyle. Austen and Christie are fundamentally all about the motivations in human psychology. Where Holmes looks at a person's fingernails and deduces she is a musician, Christie watches a couple quarrel, and deduces they are really married, though they pretend otherwise. For her, such evidence is as solid as a footprint, and based on it, conclusions can be drawn.Nevertheless, she does revert to simple forensic evidence before convicting anyone. Her plots are always complicated, but Christie always provides a unique solution. If she did not, she would not be great. In th case of the Body in the Library, there is as usual all sorts of evidence floating around to confuse you and occupy your mind, but 3 pieces of evidence in the end identify the murderer uniquely. 1) The fingernails on the corpse were bitten. 2) The supposed victim clipped her nails. 3. Who identified the body?An inattentive reader might finish the book concluding that had Christie modified the plot just a little, the outcome might have been different. Not so. Not any more than Dorothy could have stayed in Oz or Hamlet survived. Christie creates an entire self-consistent and carefully planned microcosm of motivations. However, in this case, the identities are veiled, the dynamo which drives the plot is the who-done-it. In this regard, her genre, of course, is in Doyle's tradition.And I so much like Miss Marple as a literary figure -- the enlightened being, British style. She lives in British society with its commoners and gentry, but is somehow neither. She easily consorts and sympathizes with both. She seeks neither wealth nor fame. She is content, fearless. Her mind and emotions are steady without being cold. And she does not pass judgement on her fellow man, though she stands unflinching in the face of justice -- Nemesis, she is called in one novel. She always knows who did it at the precise moment when all the evidence is in. In this case, that happened when the little boy showed her the clipped nails. Inspector Slack dismisses him as irrelevant. Marple does not. To her all men are created equal. Yet each is unique and understood on his or her own

Published by Thriftbooks.com User , 21 years ago
Agatha Christie's the Body in the Library is truly a great mystery book. Of course, Agatha Christie does not need any additional praise from humble me to boost her reputation as an unparallelled author of mysteries. In this book, the corpse of a young woman is found in the library of Gossington Hall, the home of a well-to-do colonel and his wife. Miss Marple, in conjunction with the police, sets out to investigate. She comes upon many discoveries, and it can be seen that many parties benefit from the death of the woman in the library and/or have the opportunity to kill her. As the investigations progress, a possibly related incident occurs: a car burned to shrapnel in a neighboring region. Miss Marple, of course, with her impeccable investigative prowess and sharp eye for detail, solves the mystery methodically and impressively. The outcome is dazzling and this book is a great read for all mystery-lovers out there.

This is one of Agatha Christie's finest stories.

Published by Thriftbooks.com User , 23 years ago
This story has lots of characters and plot twists. Readers will find Miss Marple and her investigation of the crimes to be highly involving. A classic story that will be enjoyed by every Agatha Christie fan.
Trustpilot
Copyright © 2022 Thriftbooks.com Terms of Use | Privacy Policy | Do Not Sell or Share My Personal Information | Accessibility Statement
ThriftBooks® and the ThriftBooks® logo are registered trademarks of Thrift Books Global, LLC