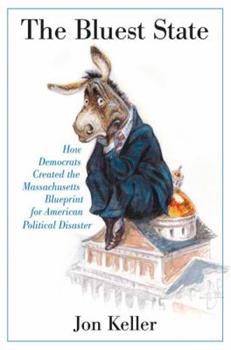 The Bluest State: How Democrats Created the Massachusetts Blueprint for American Political Disaster

Published by Thriftbooks.com User , 13 years ago
Having been born and lived for most of my life in Massachusetts, it's refreshing to read the other side of the Boston Globe. Too bad that the "boomers" won't get the message.

Great Book for Democrats To Learn From

Published by Thriftbooks.com User , 14 years ago
Having grown up in Massachusetts and having spent a lot of time working in politics, I read this book with great anticipation. And my high expectations were exceeded! Mr. Keller's knowledge of the intricacies of Mass. political history is awesome. He uses this knowledge to entertainingly critique the excesses of the Mass. Democratic party's liberal establishment. Along the way, I gained facinating insights regarding the Kennedy family, John Kerry, former Boston Mayor and political living legand Kevin White, former Massachusetts Governor and current presidential candidate Mitt Romney, and so many more of the political personalities that make this study of Bay State politics so interesting. As a life-long Democrat, I found Keller's critique instuctive. And as another reviewer suggested, I too hope that Democratic candidates read this book and take note. Finally, I give Mr. Keller credit from weaving some of his own personal history into this book, because ultimately it's Mr. Keller's personal passion for politics and, in addition, his passion for the plight and diginity of the economic have-nots of Massachusetts that comes shining through. Enjoy this book! I did.

The truth about Massachusetts

Published by Thriftbooks.com User , 14 years ago
I have been following Jon Keller for years here in Massachusetts, starting with his weekly coverage of all things political at the alternative newspaper, The Boston Phoenix. When he moved to TV, he continued to develop an ability to root out the rats in state government. For twenty years, he has been the voice of truth about what makes the voters tick in this bluest of states, and it's now a pleasure to see his voice back on the pages of this book. Part serious, part hilarious satire, I can't wait for the next installment. Kudos!

Published by Thriftbooks.com User , 14 years ago
I am a liberal and I love this book because it rings so true and is a pleasure to read. The anecdotes will make you laugh out loud. The book is getting a lot of attention in conservative media circles, but it's also for liberals. Jon is a broken-hearted baby boomer who wants Democrats to wake up and get back on course. He's not a conservative per say, but rather a very sharp independent thinker who isn't afraid to speak truth to power. I hope that the Democratic candidates will read this book and take note!
Copyright © 2020 Thriftbooks.com Terms of Use | Privacy Policy | Do Not Sell My Personal Information | Accessibility Statement
ThriftBooks® and the ThriftBooks® logo are registered trademarks of Thrift Books Global, LLC