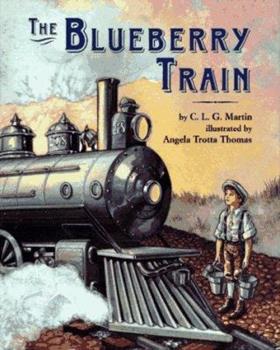 Trying to prove that he is old enough to wear long pants, Louis decides to ride the blueberry train to Copper Creek, where he plans to pick enough berries to sell them and buy long pants of his own. This description may be from another edition of this product.

Published by Thriftbooks.com User , 19 years ago
This adorable story about trains and bears is set in the 19th century, when young boys wore short pants and older ones long pants. Louis wanted to be like his older brother Willie and wear long pants. He stood on shore with his mother and brother waving goodbye to his father's ship, which would be gone all summer. Willie announced he'd be in charge for that time. Louis, angered, took off on his bike, then crashed. At the bottom of the hill, a blueberry train pulled into the station, and Louis asked his mother if he could ride it alone to Copper Creek to pick berries to sell to Hemplemiers Bakery. He planned to buy long pants with the proceeds.After a night dreaming of dragons, black knights and gloomy dungeons, Louis set off on the train the next day by himself, with a bucket for blueberries and a lunch pail. On board, a woman asked to sit with him, and pretended to feel frightened. Louis was heartened.The train rolled over a wooden bridge, through woods and past farms, finally stopping at Copper Creek. The woods filled with blueberry pickers. At lunchtime he ate with his train companions, but he went back to work by himself.Louis trudged into a far part of the clearing, and began picking. He could feel something watching him. The bushes shook, and Louis whirled around to see a toddling black bear cub, not much bigger than a puppy.Things got nastier before they got better. But readers must pick up this book to learn how Louis escaped from the mess. Tell you what, though. This book is like a piece of fresh blueberry pie. Alyssa A. Lappen
Copyright © 2022 Thriftbooks.com Terms of Use | Privacy Policy | Do Not Sell My Personal Information | Accessibility Statement
ThriftBooks® and the ThriftBooks® logo are registered trademarks of Thrift Books Global, LLC