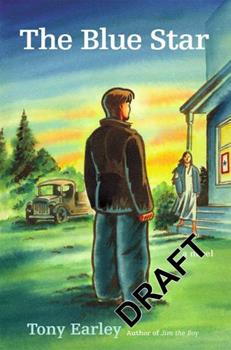 Seven years ago, readers everywhere fell in love with Jim Glass, the precocious ten-year-old at the heart of Tony Earley's bestseller Jim the Boy . Now a teenager, Jim returns in another tender and wise story of young love on the eve of World War Two. Jim Glass has fallen in love, as only a teenage boy can fall in love, with his classmate Chrissie Steppe. Unfortunately, Chrissie is Bucky Bucklaw's girlfriend, and Bucky has joined the Navy on the eve...

Published by Thriftbooks.com User , 13 years ago
This wonderfully touching story takes place in a small rural town in North Carolina in the months leading up to World War II. The protagonist is Jim Glass a high school senior who lives with his widowed Mother. "THE UNCLES", as his Mother's brothers Zeno, Coran and Al are affectionately referred to, provide the unspoken Fatherly duties that a young boy like Jim would so desperately need with the absence of his Father. "THE UNCLES" have houses right next door. Because Jim and his friends were now seniors "they had earned the "right" to stand on the small landing at the top of the school steps, squarely in front of the red double doors. Every boy or girl had to go around them to get inside." From this lofty perch Jim could see all the school buses that arrived each morning and watch all the students get off. It is here where he saw and fell in love with Christine (Chrissie) Steppe. Chrissie came from the mountains to school and rumor had it that she was half Cherokee Indian, which was not looked upon too kindly in 1941 America. It had also been stated by some that Chrissie was Bucky Bucklaw's girlfriend. Bucky was a former student that Jim had played on the same baseball team with, but was now in the Navy. The heart of this tale revolves around the young unrequited love that Jim must carry around inside of him. He wonders how it would look if he made a move on a serviceman's girl while he was off to war. When Jim tries to share even the remotest interest in Chrissie with a friend or member of his family, there's always a comment about her probably not being "white" or a comment about her absent Father "Injun Joe". One day Chrissie is sick in school and Jim being one of the few people with a car offers to drive her to her mountain home. The author weaves a beautifully intricate scenario where Jim finds out that the term "Bucky's girlfriend" may be more a matter of survival for Chrissie's family than true romance. The reader feels the sadness and helplessness in Jim's romantic anguish, as he had broke up with his former girlfriend Norma Harris, who wouldn't let him kiss her enough, but who still loves him, and his burgeoning love for Chrissie who will not let him near her heart. Making matters more uncomfortable is the fact that Norma has remained very close to Jim's mother and meets with her every week to work on a quilt, and makes Jim walk her to their house. The author's writing is at times like intelligent poetry as in the case of Jims thoughts: "Jim could not understand how he could have loved Norma so much then and feel so differently now. His head seemed filled with memories belonging to another person, and he wished he could give them back." Another example: "He felt himself smile so broadly, so ridiculously, that he would not have been surprised had sunshine poured out of his mouth." This story is written so eloquently, yet so simply, that I recommend this book for teenagers and adults. It is a realistic coming of age story that combines t

"I love everything about you." Jim Glass

Published by Thriftbooks.com User , 13 years ago
Tony Earley, like his mentor Ernest Hemingway, was first a journalist. Now an Associate Professor of English at Vanderbilt University, and called "the future of American fiction," Earley has battled chronic depression his entire life. Each of his deceptively simple sentences are hard-fought victories. And now, with four books squeezed out from his inconstant instrument, we readers are so damned lucky to have them. This morning I finished "The Blue Star" and tonight I still ache and yearn to read it again. It's been a very long time since an American novel has touched me like this one. Perhaps Capote's "The Grass Harp" can compare. Tony Earley has captured something here, a delicate piece of American life and adolescent pain that I dare not even attempt to articulate. All the fine descriptions and wonderfully fresh dialog are spot on. Jim Glass, the young man at the heart of this work, is drawn like a moth to the flame called Chrissie Steppe. Nothing can be done about this sadly impossible love, as it is what it is. Yet so much more lies within this simple storyline. Families, poverty, tragedies, and huge uncontrollable world forces move within this book like seismic stresses that shake the earth and shape its destiny. And all the while, from the first page to the last, Tony Earley is forming clear pictures of people, of places, and of a significant time in our history that is gone forever. Here are some examples of his writing: "The orchards rolled away from the farm road in prosperous formation, ridge after terraced ridge, all the way to the top of the mountain. The grass was combed white with frost. The fruit trees glittered like fountains whose water had sprung suddenly from the earth, only to freeze before it touched the ground." And then this: "The sky was low and gray and hard-looking--not the roiled, booming sky of early spring, but the bitter, set face of deep winter. A cutting wind from the west chased trash from the fields across the road and occasionally dashed a thimbleful of sleet against the windshield...." I cannot tell you how deeply I was moved by this book. It's impossible to tell you. It is not a small book or a small story. Those who have reviewed it this way have missed its depths. It is a masterpiece. No pressure, Tony Earley, but I will be praying that you find your way to the next installment of Jim Glass's life. You have enriched me and all of us with your work, as only the finest artist can.

Published by Thriftbooks.com User , 13 years ago
I really enjoyed the author's earlier book, Jim the Boy, and had high hopes for this sequel book...sometimes sequels are a disappointment. This book is no disappointment. It's a sweet, sometimes sad story in a time period I enjoy reading about (the 40's). It never lags and it leaves you wanting more. Hopefully, the author will take us for another ride.

Published by Thriftbooks.com User , 13 years ago
I couldn't put this book down. It's a simple, honest, moving story, that captures youth and family so well. I appreciated the way the author kept the story basic, and focused on the simple drama of his ordinary, but touching characters. I would also praise him for resisting the urge to embellish the story with unnecessary, random plot twists that distract us from the characters. I can't wait to read more of his books.

Published by Thriftbooks.com User , 13 years ago
Jim Glass, the hero of Tony Earley's novel JIM THE BOY is now a senior in high school in rural North Carolina mountain country when THE BLUE STAR begins, is experiencing first love as only the young can as the United States is about to enter World War II-- The Japanese attack Pearl Harbor about half way through the story, an event that will surely affect the lives of all the young men of Jim's graduating class. Tony Earley holds up a gentle but unflinching mirror to show us a time and place in our nation's history that is forever gone: the poor, isolated, sometimes prejudiced section of the country we call Appalachia. The character Dennis Deane, upon being told that the Japanese just bombed Pearl Harbor, is unaware what Pearl Harbor is although he manages to get a fourteen-year-old girl pregnant the first time they have sex. Chrissie Steppe, whom Jim loves madly, bears the brunt of racial prejudice because her father "Injun Joe," is a full-blooded Cherokee Indian. Poverty is never far from the most successful of families, whether it is those who till the land or the "lintheads" who live and work in the horrible mill towns. In often deceptively simple but evocative prose-- although he can certainly turn a phrase when he chooses to do so-- Mr. Earley in this sweet though never saccharine novel has created a group of memorable characters, some of whom will tear the heart right out of you. Be prepared for your eyes to burn. In addition to Jim, there are his three bachelor uncles who look out for his welfare at every move he makes; his mother who wishes he would marry Norma, a good girl whom he does not love; Chrissie, whom he does; Dennis and Ellie Something; and even Miss Brown, Jim's high school history teacher who entreats him not to forget the "conquistadors" he has studied in her class. Having grown up in this part of the United States, I can say that Mr. Earley gets his facts, expressions and sayings right, whether it be "daggummit," "doggone," "daggum" or "chifforobe." Jim's mother makes a quilt from flour sacks. His family eats pinto beans and cornbread. They attend a brush arbor revival where the preacher might take up a love offering. They may joke that they are going to see a man about a dog. Finally, Jim reads Zane Grey and likes the Lone Ranger. THE BLUE STAR, named after the banner that families of servicemen hang in their windows to show to the world that they have a family member fighting in battle, is about war and its effect on families, poverty, growing up and, although it is almost too trite to say, how love can have such a salutary effect on the uncertainty associated with going to war as well as the starkness of poverty. Jim's love-filled homelife is in sharp contrast to that of Chrissie's. There is a particularly moving scene in the novel where she tells him that there is a lot in the world to feel bad about. Jim answers that he had never thought that way; to the contrary, there are a lot of things in the world to feel good
Copyright © 2020 Thriftbooks.com Terms of Use | Privacy Policy | Do Not Sell My Personal Information | Accessibility Statement
ThriftBooks® and the ThriftBooks® logo are registered trademarks of Thrift Books Global, LLC