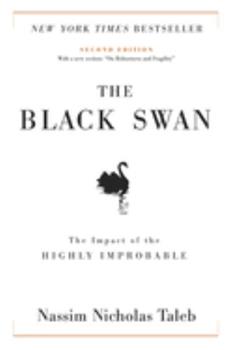 The Black Swan: Second Edition: The Impact of the Highly Improbable: With a New Section: On Robustness and Fragility

(Book #2 in the Incerto Series)

The Black Swan is a standalone book in Nassim Nicholas Taleb's landmark Incerto series, an investigation of opacity, luck, uncertainty, probability, human error, risk, and decision-making in a world we don't understand. The other books in the series are Fooled by Randomness, Antifragile, Skin in the Game, and The Bed of Procrustes . A black swan is a highly improbable event with three principal characteristics: It is unpredictab= it carries a massive...

This is NOT the second edition!!!

To Expect the Unexpected

Published by Thriftbooks.com User , 15 years ago
It's a rare book that makes you look at the world differently. The Black Swan enhances our awareness of our skewed way of viewing reality and the damage that can cause. Taleb focuses on one kind of bias: our penchant to forget the improbable. Rare events with big impact, here represented by the black swan, are easy to ignore until they happen. Because they don't show up for long periods, the risk is invisible--out of sight, out of mind. As he demonstrated with his earlier Fooled by Randomness, Taleb has an exceptional ability to ground abstract ideas in concrete examples, some from his own experience as quant, derivatives trader and hedge fund manager, but also from other aspects of life. The civil war that descended upon his family in Lebanon, a place where ethnic groups lived together in amity for a century, makes a vivid illustration. His well-to-do and politically connected relatives were sure that that the conflict would end in a matter of days; instead it lasted 17 years. While the book is mostly a demonstration of our cognitive failings, it also contains a quirky but useful how-to manual for dealing with an unpredictable world where huge consequences can follow from tiny differences. Chapter 13, with a title that starts "Appelles the Painter", explains what to do when you don't know what will come. Entertaining as they are, chapter headings like "How to Look for Bird Poop" don't help the reader navigate what is an unconventional, nonlinear format. While it bristles with intriguing ideas, the book as a whole is not easy to grasp, as those familiar with Mr. Taleb's style from Fooled by Randomness will know. Each piece is powerfully engaging, but the entire argument is more elusive. But being forced to figure it out is no bad thing and along the way one laughs at the absurdities of fate and humanity.
Trustpilot
Copyright © 2022 Thriftbooks.com Terms of Use | Privacy Policy | Do Not Sell My Personal Information | Cookie Preferences | Accessibility Statement
ThriftBooks® and the ThriftBooks® logo are registered trademarks of Thrift Books Global, LLC