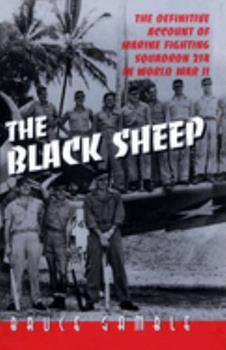 With their renowned squadron leader Greg "Pappy" Boyington, Marine Fighting Squadron (VMF) 214 was one of the best-known and most colorful combat units of World War II. The popular television series Baa Baa Black Sheep added to their legend--while obscuring the truly remarkable combat record of the Black Sheep and Boyington. A retired naval flight officer and former historian for the Naval Aviation Museum Foundation, Bruce Gamble provides a highly...

"We Are Poor Little Lambs Who Have Lost Our Way..."

Published by Thriftbooks.com User , 16 years ago
Author Bruce Gamble has done a teriffic job of describing Marine squadron 214 and their heroic actions over the Solomons during 1943-1944. Commanded by Major Gregory "Pappy" Boyington, a hard-drinking, hardfighting pilot, the Black Sheep compiled a record of enemy kills that other squadrons could only dream about. Boyington himself was credited with twenty-eight enemy planes shot down, including six as a member of the famed "Flying Tigers". He was the leading Marine Corps ace of WWII. I remember as a child watching the television show "Black Sheep Squadron" with Robert Conrad starring as Boyington. I enjoyed each episode, and that experience made reading this book that much more enjoyable. Gamble does an excellent job of describing the evolution of VMF 214 from their days on Guadalcanal to their heyday under Boyington. After Boyington was shot down and captured by the Japanese in January, 1944, the remaining members of VMF 214 were assigned to the aircraft carrier USS Franklin, but they endured tremendous hardship when the Franklin was nearly sunk by a Japanese dive bomber in March, 1945. I've been a World War II aviation reader for many years, and this is one of the best books I've read. The many battles fought by the Black Sheep are described in great detail. I highly recommend this great book. Pick it up and see how a rag-tag group of pilots became the terrors of the South Pacific.

Published by Thriftbooks.com User , 18 years ago
I found the book in a used-book store and bought it.Engrossing from beginning to end. The characters depicted are truly the stuff that heros are made of. These swashbucklers are all irrepresible.R eading about them makes you feel proud and a little envious. They lived their lives to the full. A great read and a must for Boyington fans.P.S. If anyone could lead me to Henry S. Miller's 'Solomon Islands Diary from March 3 to November 13, 1943 ', I would be much obliged.

Published by Thriftbooks.com User , 21 years ago
While working on my senior seminar paper for my History degree, I used two of Bruce Gamble's books, this one and Black Sheep One. I found both books great resources and loaded with interesting facts and attention to detail. These books helped me earn an "A" in the class and on the paper itself. Great books for the time period and anyone interested in the Blacksheep.

Published by Thriftbooks.com User , 22 years ago
Dear MR. Gamble: I hope you continue in your career writing about NAval (or Army) air units in WW II, because what you did in this book is amazing. The history is great, researched to the end. It gives us not only information about VMF-214 and Pappy, but also about Navy aviation in the War. Amazing!

Everything you wanted to know and more!

Published by Thriftbooks.com User , 23 years ago
Bruce Gamble's account on the History of the famed VMF-214 provides a detailed look into the lives of Marine fighter pilots during the Pacific War in WWII. From the formation of the squadron thru to it's most recent history, you really get a sense of what it must have been like. This book is a perfect companion to Boyington's, Baa Baa Black Sheep or Frank Walton' s, Once They Were Eagles. Gamble's extensive research includes numerous interviews with surviving members of 214. Having read Boyington's and Walton's books, I expected that Gamble would address the 'story telling' that Boyington was know for, and he does. The Black Sheep were not the bunch of untried misfits that they have been made out to be and Gamble goes the distance in clearing that up. My only problem with his work is that, at times, he seems to take pleasure in proving out Boyington to be a liar. I think most of us would accept that Boyington was telling his story, as he saw it. Certainly he added details to 'enhance' his exploits in the war, but so what? Gamble is right to point out differences when he sees them but the final judgement should be with the reader. Greg Boyington has been credited with 28 air victories during the war. Gamble, and others, have shown that three of his Flying Tiger kills did not likely take place, fair enough. Gamble goes further to say that Boyington's final two victorys should also not count since they were not witnessed, or supported by Japanese records. If that requirement was applied to other aces of the war then there scores would suffer as well. It is enough to say that Boyington most likely had 25 kills, but has claimed and been credited for 28. Let the man rest in peace. Once you get past that, Bruce Gamble's book is a must read for WWII aviation fans.
Trustpilot
Copyright © 2022 Thriftbooks.com Terms of Use | Privacy Policy | Do Not Sell My Personal Information | Accessibility Statement
ThriftBooks® and the ThriftBooks® logo are registered trademarks of Thrift Books Global, LLC