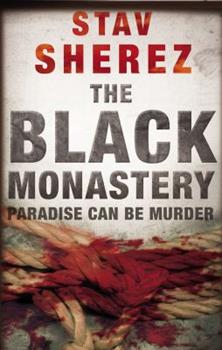 When Nikos, a detective in the final years of his career, is persuaded back to his home town he is faced with the gory murder of a young boy near the old monastery. Echoing two murders committed 33... This description may be from another edition of this product.

Published by Thriftbooks.com User , 13 years ago
I've never read a crime novel before, but after reading this, I will make a point to pick up more novels like it as this is truly the most engaging and exhilarating novel I have read in a very long time. The characters are well defined and believable in their ways as they are flawed and human in depth and the decisions they make. Nikos one of the main characters in the book is a high ranking police detective close to retirement, working on the case this story is about shows how his own human emotions and detrimental past through the way in which he works on solving the case. Believable characters are what make a successful book and this is filled to the brim with them. The story focuses around two bodies which are found mutilated in a ritualistic way at old monastery ruins. Nikos the chief Police detective takes the case as it bares resemblance to the ritualistic killings of a large cult which committed mass suicide after the murders in 1974. Set on the small Greek island of Palassos, a popular crime fiction writer named Kitty is holidaying on the island when she becomes intrigued by the recent murders and the murders of the past. Her stalker, Jason, incidentally saves her life when she first arrives and develops a relationship based on secrecy as he struggles with keeping his fanatical stalking secret from her as they both get more involved with each other. Although the murder mystery and the setting itself are interesting in their own right, it's the realism of the characters that make this novel so enjoyable. The main 3 of Kitty, Jason and Nikos along with the equally interesting, Wynn and Mayor Petrakis make for an ensemble cast worthy of a 5 star rating in itself. As the mystery of the murders unravel and Kitty & Jason are given numerous violent hints to stay out of the puzzle of the new ritualistic murders, the story becomes sincerely riveting and fast paced. I found myself sitting for hours losing myself in the world of this crime mystery which has never happened to me before. Being the first novel by Stav Sherez I have read, I really had no expectations going in and depending on how you look at it, that can either be a good or a bad thing. For me, it was most definitely a good thing as I had no prior expectations and from the roaring reviews I have read of his first novel I can imagine that when I get around to that I will be holding those massive expectations and fearing to let them go. I would strongly recommend this book as if you haven't heard of this author before, you will be extremely surprised at the quality of writing and suspense within and find yourself becoming quite bitter at the hype surrounding the terrible writing of Dan Brown, when something of this quality is being overlooked in an embarrassing way.

Published by Thriftbooks.com User , 13 years ago
Police officer Nikos is getting close to retirement, but as his final assignment he is returning to his home, the Greek island Palassos, to track down drug traffickers. However his arrival coincides with the brutal ritualistic killings of two teenagers, reminiscent of killings some thirty years or more ago. Successful crime novelist Kitty is escaping work and an inattentive husband to Palassos to for a well earned rest; wannabe crime writer Jason has other motives in going, not entirely unconnected with Kitty. There lives are due to become dangerously intertwined. What results is a gripping and imaginative drama, as present day events become more and more related to what happened on Palassos in 1974. The characters are well drawn, and there are plenty of twists and and a number of red herrings as the plot unfolds. There is also more than enough gore, and the writer seems to have a fascination with vomit. The build up to the climax is a real page turner, the outcome difficult to predict, and there is poignant coda. Good stuff!
Trustpilot
Copyright © 2022 Thriftbooks.com Terms of Use | Privacy Policy | Do Not Sell My Personal Information | Accessibility Statement
ThriftBooks® and the ThriftBooks® logo are registered trademarks of Thrift Books Global, LLC