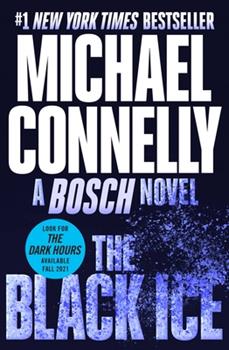 When an LAPD narcotics officer is found with a fatal bullet wound and a suicide note, Detective Harry Bosch follows a bloody trail of drug murders across the Mexico border. Working the case, LAPD detective Harry Bosch is reminded of the primal police rule he learned long ago: Don't look for the facts, but the glue that holds them together. Soon Harry's making some very dangerous connections, starting with a dead cop and leading to a bloody string...

Published by Zookeeper , 3 years ago
The story progresses nicely, the characters are real, and it keeps you guessing until the end.

Published by Thriftbooks.com User , 6 years ago
Even though I'm reading them out of order I'm loving the series, every time I pick one up I keep thinking its not going to get better but it does, can't wait to read more of this series.

My favorite Connelly so far.

Published by Thriftbooks.com User , 19 years ago
This is the third Connelly that I have read, and the first featuring Harry Bosch. I was really impressed, and this makes me want to pick up all the Bosch novels. It is moody and dark, with and well-drawn and well-developed characters. While Connelly's non-Bosch works were quite good, this genuinely approaches great. The story features drugs and corruption between Mexico and the LAPD. Bosch is a character who is a tough maverick in a believable kind of way. He is hard-boiled but still has some soft points-- standard requirements for the classic noir detective. The way that he makes the character interact with the plot is less standard. Too often, writers who are working in the noir side of the genre create nothing but faithful imitations of Chandler or Hammett. Connelly is brave enough to update the form, and it succeeds fantastically. If the rest of the Bosch books are as good as this one, then I do not think it will take me very long to work my way through the collection. Recommended.

Bosch at his best

Published by Thriftbooks.com User , 21 years ago
Michael Connelly consistently delivers exciting hard-boiled police procedurals with Harry Bosch in control. In Black Ice Bosch is cut out of an investigation of an apparent suicide of narcotics officer Calexico Moore by the bigwigs of the department. They want to do what is pc and Bosch is definitely not that. At the same time Bosch's supervisor Pound feels compelled to increase the percentages of his homicides solved so Bosch is elected to solve some cases of an out on stress leave detective, Porter. Harry realizes that Porter's case, his own and Moore's "suicide" are all tied together. As usual Bosch cuts corners and goes out on his own to make the pieces fit.An excellent read for any fan of mystery and suspense. Connelly is always exciting and hard to put down. I am ready for a new one. For anyone unfamiliar with Connelly and Harry Bosch, read them in order and not spread out over years as I have done.

Published by Thriftbooks.com User , 21 years ago
Michael Connelly's books are definitively within the "hard-boiled urban detective" genre that historically has been highlighted by the work of Raymond Chandler and other great mystery writers. *The Black Ice* is the second in a series of novels with LAPD detective Hieronymous Bosch as the protagonist (the first was *The Black Echo*), and it's definitely a winner. There's murder, intrigue, twists and turns in the plot, and plenty of action, as well. One thing that Connelly does particularly well is to include geographical/place descriptions in his work. When one reads his descriptions of life in Los Angeles or travels to a bordertown like Mexicali, these places really do seem real and are accurately depicted. The book is not perfect; as in so many police mysteries, sometimes the clues come just a bit too neatly packaged, and at times this doesn't seem realistic. But then, real police work is probably pretty dull 90% of the time (false leads, endless drudgery, etc.), so streamlining the process for the sake of fast-moving fiction is certainly forgiveable. The other thing that had me rolling my eyes a bit is the obligatory "romantic angle" that seems always to be a subplot in these books. Again, it's kind of a sacred part of the genre, but wouldn't it be interesting if for once Bosch noted the "gorgeous but sad woman" and then went about his business without becoming involved with her? All in all, this is a terrific book and an absorbing, "can't put it down" read. One last thing: I would recommend that people who wish to read the Bosch novels start with the first (*The Black Echo*) and read them in chronological order, as Connelly is very careful in his novels about maintaining accurate references to what has happened to his protagonist previously.

Published by Thriftbooks.com User , 22 years ago
Since I only recently started reading the Michael Connelly series featuring Harry Bosch, I made sure to start reading them in order. This 2nd book is just as great as the first book(Black Echo)and the story delves a bit more into Harry's character-something that you will likely find in all of Connelly's books featuring Harry Bosch. This time around Harry gets involved(without the approval of police brass-surprise)in the murder of fellow detective Calexico Moore, found dead in a rundown hotel room. As expected, there's more than one plot that intertwines as the story develops. Harry takes over the cases of a detective he works with in the RHD, a man with a drinking problem who suddenly calls in saying he's taking early retirement. The first case Harry looks into involves a dead laborer found just outside of a diner frequented by cops. It so happens that particular case was worked on by none other than the late Det. Cal Moore and bingo! Harry, with a little extra research starts to put two and two together and you're well on your way to a fast moving, mesmerizing story with a really surprise ending. Very highly recommended, especially for those that enjoy good mystery/suspense stories with unlike detective heroes.
Trustpilot
Copyright © 2022 Thriftbooks.com Terms of Use | Privacy Policy | Do Not Sell or Share My Personal Information | Accessibility Statement
ThriftBooks® and the ThriftBooks® logo are registered trademarks of Thrift Books Global, LLC