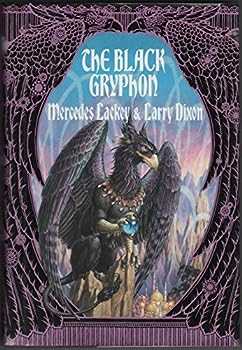 by Larry Dixon and Mercedes Lackey

This description may be from another edition of this product. It is an age when Valdemar is yet unfounded, its organization of Heralds yet unformed, and magic is still a wild and uncontrolled force. Skandranon Rashkae is perhaps the finest specimen of his race,...

my favourite of the mage wars...

Published by Thriftbooks.com User , 20 years ago
this is a really, really great book. i reckon this is one of her best yet, in the same league as 'magic's promise' and 'magic's price'. what i regret most is the fact that it took place at the end of the war with ma'ar. i regret the fact that urtho is such an enigmatic character, in which i mean that there's not much that we know of him. it would have been great had we known him like we know vanyel... i find urtho really fascinating. one of the best thing about this book is the fact that the emotions are real and tangible.... it feels like a battlefield out there and the future looks bleak and yet hopeful at the same time. i really wanted to actually know what ka'venusho is like before the war, how urtho was dragged into the mess and generally what was the past like. all of this is sadly lost by vanyel's time and it's sad... the people, the history and the technology has all gone to dust by then. i love the way misty express the bond between amberdrake and skan, and also how urtho was with skan. i was really pissed off when i realized that urtho died in such a wastefull manner... and really uncalled for. they had such fantastic plans and well, it's just too bad. that's why i personally think that misty should do a series on his life, at least. the story telling is superb, the character development is excellent and the plot is not wasted here. be forewarned though that the ending is really heartbreaking. a truly enjoyable book.

A 'must' for any raptor or gryphon fantasy novel reader!

Published by Thriftbooks.com User , 21 years ago
Lackey is a masterful fantasy author, and often integrates her work with birds of prey; being a raptor rehabilitator herself. I loved this book and consider it my favorite. The memorable Black Gryphon, Skandranon, tops my list of best characters. But Lackey's story is a tapestry of much more, telling of relationships, heroic deeds, and subtle humor. Set against the backdrop of a magical war, The Black Gryphon will evoke a sense of adventure within you.

Great book for the beginning series

Published by Thriftbooks.com User , 22 years ago
I bought this book because I recognized the name, and was on a buying binge. I started reading it later and couldn't put it down. This book got me hooked on Mercedes Lackey's Valdemar books. I have managed to read all 20 something books about Valdemar. I'm waiting for the next one. Lackey's descriptions and world is entriguing. I wish some other books of the Mage Wars time were published. I have now read The Black Gryphon over 15 times. I love the was it progresses. My only problem with the book was it didn't describe gryphons or any of the magical created species well. Another thing I enjoyed about this book was the illustrations. They made it easier to identify the characters, without lengthy descriptions. For a long time this has been my favorite book.

Published by Thriftbooks.com User , 23 years ago
I have read many books that have gryphons in them, but all the books describe gryphons as dumb beast with a brain the size of a pea. In this trilogy, the only one of it's kind, the gryphons are as they should be! With the intelligence of a human (And maybe beyond) where these magnificent creatures live and interact with humans and each calls the other friends and have deep respect for one another. A MUST READ!

The best book I've ever read

Published by Thriftbooks.com User , 23 years ago
What I think makes this story good is the unique style of writing.The best way to describe it is a fantasy/mystery/where you fill in the blanks for the rest of the plot.
Copyright © 2020 Thriftbooks.com Terms of Use | Privacy Policy | Do Not Sell My Personal Information | Accessibility Statement
ThriftBooks® and the ThriftBooks® logo are registered trademarks of Thrift Books Global, LLC