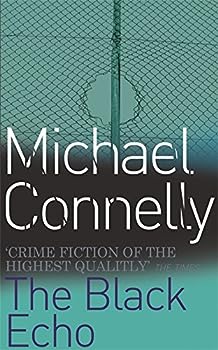 An LAPD homicide detective must choose between justice and vengeance as he teams up with the FBI in this "thrilling" novel filled with mystery and adventure (New York Times Book Review).​For... This description may be from another edition of this product.

One of my go to authors

Published by Stacy , 4 years ago
I’ve read many Books by this author and this is by far the best! All excellent reads! Just can’t get enough! Looking forward to more about Bosh and Haller. Saw the Amazon series, a lot of changes, but basically well done. The actor wasn’t what I pictured but he works! No

Published by Thriftbooks.com User , 16 years ago
After reading about a half dozen books in Michael Connelly's Harry Bosch series, I decided I better start at the beginning and read them in order. The Black Echo is the first Bosch mystery and it's an amazing effort for a first time novelist. In fact, it won the prestigious Edgar Award for mystery writing. The Black Echo opens when LAPD homicide detective Harry Bosch is called out on the discovery of a dead man in a drainage pipe. It appears that the victim died of an overdose, but enough red flags are raised to make Bosch suspect foul play. Not only that, but the detective actually knew the man: they were tunnel rats in Viet Nam. As Bosch starts investigating, he discovers that the victim, Bill Meadows, has been identified as a key suspect in a year old bank robbery. The robbers went through underground tunnels, and then dug their way into a bank safety deposit box vault. At first, the FBI rebuffs Bosch's attempts to pool information. But they finally relent and he is assigned to FBI agent, Eleanor Wish. As the case progresses, Bosch and Wish discover that the bank caper has its roots in Viet Nam and things get very complicated and dangerous. Bosch also suspects that someone is working from the inside and compromising their case. Even when he thinks he's got everything figured out, there is still an important piece of the puzzle still missing. I really liked The Black Echo for a number of reasons. First, the plot has numerous twists and turns, and shows Bosch's genius as a detective and Connelly's talent as a writer. In this book, we get a look at Bosch's background, which helps explain his motivations in later books. Also, The Black Echo takes place during a Memorial Day weekend. Since I read it over the same weekend, it made it more relevant. I don't give many mysteries a 5 star rating, but The Black Echo is well deserving. Not only is it a very strong start to a great series, but it has become one of my Connelly favorites.

Published by Thriftbooks.com User , 18 years ago
An absolutely terrific first novel in the superb Hironymous Bosch series, introduces us to Michael Connelly's enigmatic and troubled LA detective. Harry Bosch lives for his job, and the cost to his personal life and relationships is troubling.When we meet Harry, he has already been, in essence, demoted by being kicked off of the elite Robbery/Homicide squad and stuck in Homicide in the Hollywood division. But Harry is a pure detective, and will work every case with the same single-minded tenacity that gets results while alienating him from his fellows and irritating his bosses.A throw-away death of a junkie found in a drainage pipe would have gone unnoticed if anyone but Harry Bosch had caught the call. But Bosch, while having a lousy personal life IS a superb detective, and he sees what many would miss. Not only that, but the victim is someone from Harry's past which further prompts him to look deeper. Harry's investigation causes him to cross paths with the FBI and his conflicts become even more personal when he becomes romantically involved with a female FBI agent. The story unfolds with many surprises and the meticulous detail that we will come to expect from Connelly in the series. First rate all the way. A great beginning.

Published by Thriftbooks.com User , 21 years ago
Every now and then you read a book that announces the presence of an excellent new writer. These are great discoveries that are to be savoured: I get a shiver and my heart races with excitement each time it happens. The book cries out to be read slowly and enjoyed, but you just want to rip through it to see how it ends. Then you read the book again and again, just for the sheer enjoyment. "The Hunt for Red October" was one such book; "The Eye of the World" another. "The Black Echo" is a third. Michael Connelly's debut effort has to be one of the very best books I have ever read, and certainly one of the best detective fiction books out there.Connelly has an excellent eye for describing real life: his scenes are gritty and intoxicatingly detailed and his ear for dialogue is superb. His characters are memorable; writing with the benefit of hindsight, the Harry Bosch series has proved to be a modern classic. The old adage is "write what you know about". Connelly knows crime (he was a newspaper crime reporter) and he knows LA; like the back of his hand. I recommend this book to anyone who enjoys a good story. Stick through his next, "The Black Ice", which is very good but not as good as this, and then move into "Concrete Blonde" and "The Last Coyote", which are also superb.

Published by Thriftbooks.com User , 23 years ago
This was Michael Connelly's first novel (of 6 to date) featuring LAPD detective Hieronymous "Harry" Bosch. Matters begin innocuously enough when Bosch discovers that a dead body found in a drainage pipe is a one-time Vietnam comrade of his named William Meadows. It appears to be a simple drug overdose, but Bosch suspects foul play, and when he determines he is right, he is plunged into an investigation that develops into far more than a single murder case.The "iceberg" plot where a complex scheme is only gradually exposed is a crime fiction standard. Connelly is, even in his first novel, a master at this type of plot-line. His characters are three-dimensional and interesting, especially Bosch and his uneasy ally, FBI agent Eleanor Wish. Best of all, Connelly knows his territory--a former Los Angeles Times reporter, he knows LA and the LAPD (I suspect he still has sources in the department). The Black Echo is a superb novel.

Published by Thriftbooks.com User , 23 years ago
The first book I read by Mr. Connelly was his departure from the Bosch series, "The Poet" and I knew I had to read the rest. I have read every single other Bosch novel and finally went back to the beginning and read this. I should have started with this one, its just as good if not better than the series and Bosch is a fully-fleshed out character who you can always cheer for. This book is also interesting because of its attention to detail and the police procedure as well as the first meeting of Harry and Agent Eleanor Wish, his mysterious future love. Connelly has become my favorite author and his books are a pleasure to read. Just make sure you start with this one and work your way down, it does make a difference!

The Black Echo Mentions in Our Blog

From Page to Screen
Published by Devin B. • April 24, 2017
With a slew of book adaptations from a variety of genres hitting the television screen this month, don’t miss out on your chance to compare the original books to their TV counterparts. We’ve also rounded up the latest film/TV announcements so you can get a head start.
Read Article
Trustpilot
Copyright © 2022 Thriftbooks.com Terms of Use | Privacy Policy | Do Not Sell or Share My Personal Information | Accessibility Statement
ThriftBooks® and the ThriftBooks® logo are registered trademarks of Thrift Books Global, LLC