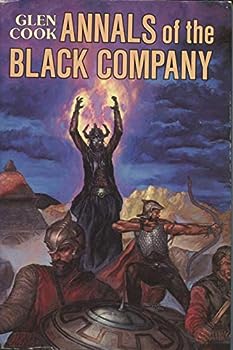 Darkness wars with darkness as the hard-bitten men of the Black Company take their pay and do what they must. They bury their doubts with their dead. Then comes the prophecy: The White Rose has been... This description may be from another edition of this product.

Published by Jeff , 1 year ago
I bought the book used and it was in a pretty good shape. No pages were banded or missing and cover was in good shape.

It doesn't get any better than this

Published by Thriftbooks.com User , 21 years ago
Before I get into this review, let me say the following to those who've commented that Glen Cook is no Robert Jordan:Thank goodness! Some might find Cook's writing style sparse, but as a reader, I find 8-paragraph descriptions of bedrooms to be insulting. Cook doesn't waste your time with frills. There isn't a single sentence in this book that you can get away with skipping.I just finished reading The Black Company for at least the tenth time. Every time another installment in the series comes out, I start with The Black Company and work my way through the entire series. Not out of worry for preserving plot continuity (you really can pick the series up anywhere without being too lost), but because they're just that good.Coming to Cook straight from Robert Jordan, I was originally thrown off-balance by the dark nature of our protagonists. But I soon realized that that's just about the whole point of the series: you can't divide the world into "good" and "evil." We *want* to believe the Black Company to be the good guys, but we just can't. We *want* to believe the Lady to be the ultimate evil, but it turns out that she's not. Cook doesn't waste words with his character development, but these people are real in a way that most other fantasy characters aren't: you can't pin them down. Nobody is either purely good or purely evil.The plot is weak. But only in the sense that every plot involving an empire and a rebel is weak. Let's face it: we've seen that all before. There's an empire? And there's a rebellion against the empire? Not really ground-breaking. But the sub-plots (Soulcatcher vs. Limper, for example) add a breath of freshness that keeps the story from growing stale.A final word to the Jordanians out there: If you're looking to start reading about the Black Company, don't start with this novel. I'd recommend starting with either Bleak Seasons or She Is the Darkness (both of which feature a different narrator and writing style). They're far from the best of the series, but many people find them a more comfortable read.

Published by Thriftbooks.com User , 24 years ago
Unlike many fantasy books, Glen Cook places his characters not in a world of good and evil, but in a world where good and evil is not absolute. The perception of good and evil in many cases, depends upon the viewpoint of the observer. The reader of the book is drawn into a world much like ours, with sorcery added for flavor. The company, with it's many main characters, serves as the unwilling pawn of the powers that be, trying to "make a living" by doing what they do best and not "taking sides". In this way, they are portraying the human dilemma of feeling a part of the world they live in, yet having little control of their ultimate fate. Also unconventional to many fantasy series, the characters are intertwined in multiple "plots" at once, and their priorities and interests change as the events of their lives unfold. This realism causes a close relationship with the characters that is found in many of the favorite fantasy stories such as the Wheel of Time series and the Belgariad series. However, unlike the Wheel of Time, the Black Company series can be read (for the most part) in sets of three books each giving a sense of conclusion after each third book while still leaving the reader wanting more! The style of writing makes reading the book feel like you are "in the action" instead of feeling an observer, and is a refreshing change from the third person point of view. It is a fantasy book in all respects offering sorcery galore, battles, intrigue in a three dimensional style including an element of depth to the characters, world and plot that can't be found in the works of many authors. Perhaps the only reason the Black Company series is not placed alongside the Wheel of Time, the Shannara, the Belgariad and now The Wizard's First Rule (besides by those who have ventured to pick up the first book to read it,)is that Glen Cook does not produce the books as quickly. However, after reading the eighth book and latest release, I can still say that each wait, which seemingly torments, has resulted in pure delight and gratification. It is the beginning of a series that if not read yet, is a must for any fantasy reader of any age!

Published by Thriftbooks.com User , 25 years ago
Glen Cook's Black Company series is at least as good as, if not better than, R.E. Feist's Riftwar Saga and D. Eddings' Belgariad, although in a completely different way. Instead of introducing the reader to his characters steadily, and allowing the reader to follow the leading characters' development as people, Cook throws the reader into the midst of a chaotic city and among a diverse mix of mercenaries viewed from the perspective of a middle-aged physician. From there the setting and atmosphere of the book get richer and richer, as Cook draws you into the world of the Black Company, tough mercenaries with a proud history, recruited on behalf of the Lady, a powerful and ancient evil, to fight the Rebels of the Empire - a force apparently not much less evil than the ruling Lady herself. The Black Company plays a vital role between these two forces, along with the mysterious Ten Who Were Taken, powerful sorcerers subdued by and bound to the Lady, yet inevitably striving and plotting towards their own freedom, barely held in check by the domination of the Lady. Beneath this complex situation lies a dormant third party, the Dominator, who is on the verge of re-emerging and destroying the lives of all those who oppose his will... The Black Company series seethes with intrique and action and is extremely original. I definitely do not recommend it to those who wish to wake up early in the mornings, as it'll keep you awake all night. A definite ten in the fantasy genre.

A brilliant fantasy epic, without the epic formula.

Published by Thriftbooks.com User , 25 years ago
The Black Company series is one of my all-time favorites. I've been reading fantasy and science fiction since I was a kid, and many of the books that I used to like, I find that I've outgrown. This series, though, has remained a favorite of mine, and recently I got a copy of the first book, titled "The Black Company", to see if it was as good as I remembered. The book is structured as a series of episodes, chronicling the lives of the core members of the Black Company, a mercenary company with a history going back thousands of years. Everything is told from the viewpoint of Croaker, the company's head doctor, and official historian. (One of this series' trademarks is the abundance of evocative names, both people and places. My favorite is "The Tower at Charm".) In this first book, the setting is the struggle between the Lady, who rules an empire with the help of her enslaved sorcerors (called "The Taken"), and the Rebels (of course). This conflict is raging over the entire continent, with the Black Company serving as a valuable pawn in the struggle. Usually, the Company is in the thick of it, and Croaker's viewpoint provides a gripping account of strategy, intrigue, massive battles, and desperate chases. I think this book is good because it incorporates a lot of the great epic-style elements, such as the titanic power struggles, while avoiding the usual shortfalls of an epic, such as flatness in the characters, and excessive, sometimes artificial moralizing. There is no "struggle between good and evil" in this book - the Rebels are just as bad as the Lady and her minions. The characters, though, are vivid, and, in the midst of this large-scale warfare, brief moments of intimacy and sincerity shine through, especially between members of the Company, trying to help each other to survive in a very imperfect world. Gripping story. Wonderful characters. I'm glad that the series is still in print.
Trustpilot
Copyright © 2022 Thriftbooks.com Terms of Use | Privacy Policy | Do Not Sell or Share My Personal Information | Accessibility Statement
ThriftBooks® and the ThriftBooks® logo are registered trademarks of Thrift Books Global, LLC