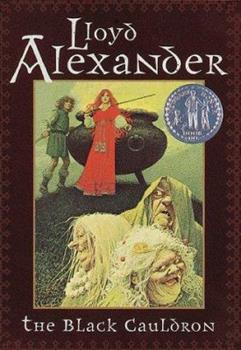 (Book #2 in the The Chronicles of Prydain Series)

"Taran, the gallant Assistant Pig-keeper, and his companions once again fare forth to destroy the evil that threatens their beloved country, Prydain.... A wise and wondrous tale written in epic fashion." --Booklist

Not as described but in good condition at a good price

Published by Tamara , 2 years ago
This book is not a paperback as described. It is a hardcover of the correct publication date without the dust jacket. I was trying to find a copy with a pictorial cover.

An amazing study of human nature!

Published by Thriftbooks.com User , 22 years ago
This book had the misfortune of being slurried into a bad Disney cartoon, and many people will no doubt judge it by the cartoon, and turn away. This amazing book, easily read by most readers in just a few hours, teaches readers the importance of sacrifice, the folly of seeking glory, and the depth of human nature. Highly recommended, along with the other four volumes of this series, especially Taran Wanderer.

One of the stronger books in the Prydain series

Published by Thriftbooks.com User , 22 years ago
In this sequel to _The Book of Three_, Taran and his companions set off to find and destroy the malignant Black Cauldron. The cauldron must be destroyed because it is the source of Arawn's deathless Cauldron-born warriors. Many of Taran's friends from the first novel return, and we meet new characters as well: Adaon, the son of the chief bard of Prydain and a wise warrior in his own right, and Ellidyr, the proud prince of Pen-Llarcau._The Black Cauldron_ is definitely superior to its predecessor, which was a very fine book in its own right. Its superiority comes from the greater depth of characterization. Taran is no longer a callow boy; he is struggling with harder issues that will resonate with many of his readers. Other characters face similar dilemmas--again and again, Lloyd Alexander shows that the answer to "What is a hero?" is a very difficult one. The plot moves quickly; it has adventure, danger, and emotional excitement to please anyone. Alexander's writing is clean and direct, and he is able to inject his trademarkj dry humor at regular intervals. Perhaps best of all, the reader has the consolation of knowing there are three more books about Taran and Prydain after this one.I highly recommend this book to middle readers who enjoy fantasy and adventure. Alexander excels at creating strong female characters, so this should appeal to boys and girls alike. And if you enjoyed this, finish the series. It's a classic, award-winning series for a reason. And if you're looking for something to read after it, try Alexander's Westmark trilogy.

The best first sequel in history

Published by Thriftbooks.com User , 22 years ago
A little darker than "The Book of Three", this amazing sequel deals with far more mature themes, including the death of a character and events that affect all of Prydain rather than just the immediate characters. Most second books are weak; this one, if anything, is far more multilayered and mature in its content. There is character death, and there is more political conflict.Princes and war leaders show up at Caer Dallben with a mission: find the Cauldron that supplies the dark lord Arawn with his deathless, lifeless soldiers. Taran, the Assistant Pig-Keeper, is elated that he will be able to participate in his first real adventure (since the last one was because of a series of accidents) with a sword and the respect of his peers. This becomes something of a problem with the arrival of Ellidyr, Son of Pen-Llarcau - an obnoxious and arrogant prince who looks down on Taran, Eilonwy, and Gurgi. Taran, Ellidyr, Prince Gwydion, the dwarf Doli, the kindly warrior Adaon, bard-king Fflewddur Fflam and others ride off to infiltrate Annuvin, Arawn's lands. (They inadvertantly have to bring Eilonwy and Gurgi) But they soon find that the situation has become much more complex, as there are forces other than Arawn and Gwydion who want the Cauldron...The story becomes more Tolkienesque in this volume. The language becomes a little more formal, especially for Taran. And Alexander doesn't shrink away from battle and character death - none of it is graphic, but it is deeply saddening. His writing reflects this, as it is far stronger and more beautiful than in "Book of Three."The tempering of Taran, which comes to full in the last two books of the series, really begins here. At the beginning, Taran is an eager boy who wants to go out, fight, be a hero. Though he is called on to act heroically, he is a wiser and sadder young man; he's seen battle and death, and they aren't the glorious foe-slaying parade that he imagined. Gurgi's growing loyalty to Taran is demonstrated, as is Eilonwy and Gwydion's growing respect for him. Eilonwy, Gurgi and Fflewddur are all their irrepressible selves, no matter what.The supporting characters are also strong: we have the goodhearted bearlike king Smoit; the sinister Morgant; the arrogant, obnoxious Ellidyr who seems to secretly envy Taran; Gwystyl, the most depressed of the Hidden Folk; and, of course, the three weird witches living in the Marshes of Morva.Ignore the hideous animated movie, and read this delightful book. For adults and kids alike, those who have read Tolkien and want more...

A great book that the Disney cartoon does a great disservice

Published by Thriftbooks.com User , 22 years ago
I am a sixteen year old girl who has been a fan of The Chronicles of Prydain for as long as I can remember. My father had been a fan of the books for years and passed them to me as soon as I was able to read them. I have read all five a thousand times and never tire of them. The adventures are always complex and exciting, and the characters are never flat. I have always appreciated the antagonists of these books because they always have reasons for doing what they do (like Ellidyr in The Black Cauldron), they never do things simply because they are bad, which happens all to often in books, especially in children's books. My favorite character is Eilonwy who has always inspired me with me with her courage and determination. Which brings me to my biggest gripe with the movie. Not only was the movie boring and urelated to the book except in name, the character of Eilonwy lacked personality, courage, and determination, qualities that were essential to the book character. So please, if you have only seen the cartoon, do not misjudge the books, and if you have only read the books, please skip the movie.

This book has been a beloved companion for 27 years.

Published by Thriftbooks.com User , 24 years ago
I've been delighted to find from reading the reviews of other readers, both old and young, that THE BLACK CAULDRON is as popular with most of them as it has been with me--for the last 27 years. At 39 years old, I may be one of your older reviewers, and I still read this book. It was the first of the series I encountered (I of course gobbled up all the rest in swift succession)and it remains my favorite. Alexander's characters have been constant inner companions for all this time, and I am increasingly aware (as someone who is now trying to become a late-blooming mom)how wise this book is as well as how sheerly and utterly fun it is, and what a wonderful set of messages it gives to both children and adults. A real must-read for imaginative kids . . . and the kind of book you can carry with you forever. One of Alexander's great gifts as a children's writer is that he gives his readers characters who are recognizable, realistic protagonists as well as portraying others who are role models. As an eleven-year old, I was entranced by Adaon, son of the chief bard, who is a very heroic but also human figure, and I have lived long enough now to appreciate the truth of what he teaches Taran about the need to love the beauty of the world. Interestingly, the kind of autumnal wisdom of the book (it's set in autumn, and it has a lot of sadness and struggle in it) is particularly well-suited for the midlife crowd, if any of you older Prydain fans want to pick it up again. My life has been very difficult during the past decade or so, and having this book's wisdom and beauty remain with me has helped a lot, as has its marvelous humor.
Trustpilot
Copyright © 2022 Thriftbooks.com Terms of Use | Privacy Policy | Do Not Sell or Share My Personal Information | Accessibility Statement
ThriftBooks® and the ThriftBooks® logo are registered trademarks of Thrift Books Global, LLC