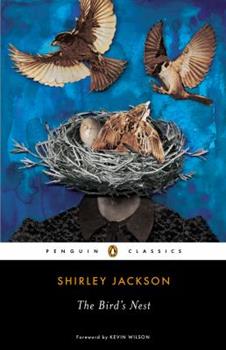 by Shirley Jackson and Kevin Wilson

Shirley Jackson's third novel, a chilling descent into multiple personalities Elizabeth is a demure twenty-three-year-old wiling her life away at a dull museum job, living with her neurotic aunt, and subsisting off her dead mother's inheritance. When Elizabeth begins to suffer terrible migraines and backaches, her aunt takes her to the doctor, then to a psychiatrist. But slowly, and with Jackson's characteristic chill, we learn that Elizabeth is not...

Published by Thriftbooks.com User , 15 years ago
This exceelen thriller is quite possibly my favorite Shirley Jackson novel. My primary motivation for reading it was the fact that the main character, Elizabeth, is a woman with multiple personalities, a disorder that fascinates me. The POV and narrative voice change periodically, with the story sometimes being told in a third person semi-omniscient voice giving Elizabeth's point of view, and sometimes being told through the journals of her doctor, Dr. Wright. I much preferred Dr. Wright's journals to the turmoil of Elizabeth's various personalities, some of which were very unstable and prone ot confusing if interesting flashbacks. The Doctor, by contrast, was much more linear and easier to follow, and Jackson gives him a delightful voice to read. I liked the book overall, especially the ending, which pleasantly surprised me. The way that Dr. Wright reacted to the individual personalities and the way that each of the personalities was given such a distinctive voice really made the book for me. Also of note: I know that Stephen King was a huge fan of Jackson's and I am positive that this is the book that inspired his character Susannah Dean (aka Odetta Holmes/Detta Walker) in the Dark Tower series. Highly recommended read, especially for King fans, who will probably enjoy it especially.

Published by Thriftbooks.com User , 16 years ago
My favorite Shirley Jackson book has always been "We have always lived in the Castle". However, although "The Bird's nest" was only Shirley Jackson's third novel, it is, so I feel, "Shirley Jackson - advanced course". This is an elaborate story which incorporates all classic Jackson fingerprints and yet involved a research and a unique way of writing. A seemingly "normal" story (at least this is how it starts...) that somehow turns - the moment cannot be precisely captured - into a haunting, creepy tale. This is a book you read and have to keep going back and checking once and again for the hints you seemed to miss in your reading. You understand the words but do not always understand why regular words give you such an uncomfortable feeling. This is by the way is a feeling which is very familiar to Jackson's readers. Also, the overall sense is that a secret clouds the whole story and that if you would have paid more attention and read more attentively, maybe you could have figured this one out, as Jackson always seems to leave hints along the way. The body of Miss R., a niece to Aunt Morgen and a patient of Dr. Wright (the two other main characters of the story) is a "bird's nest " to four conflicting characters, each one a different person with a different character, and even different facial expressions (the Dr. can tell who is standing in front of him even before she speaks). All these four personalities are fighting for dominance over the "awareness" of the young girl. The story is told in a way I never met in Jackson's books, where each chapter presents the story from a different angel, although only Doctor Wright speaks in his own narrative voice. The other chapters present one main character but from a side look. The battle is always, as with Shirley Jackson, with one's mind, a subject that interested her immensely. Like Natalie from "Hangsaman" who imagines/befriends the "girl Tony" (and the reader keeps asking himself if she is true or just fictitious), and like "The haunting of hill house" where we learn, maybe too late, that the real battle is what goes inside the mind of the heroine, in the "Bird's nest", the battle is over the mind of Elizabeth R. It is the goal of Dr. Wright (and the reader) to understand the source of this personality split. Interesting to note that this battle or conflict is, according to the famous psychologist Erik Erikson, the crisis appropriate to the age of young adulthood. Erikson describes this crisis as "Intimacy vs. Isolation" and declares that the most important events of this stage are love relationships. You are not developmentally complete until you are capable of intimacy, but an individual who has not developed a sense of identity usually will fear a committed relationship and may retreat into isolation. A split of one person and the constant battle between being complete or separate, close or withdrawn is thus a recurrent motif in Shirley Jackson (Constance the homey and Merricat the bold in

Published by Thriftbooks.com User , 17 years ago
"The Bird's Nest" is a departure from the usual horror/suspense material pumped out by the late Shirley Jackson. It is a very serious, meticulous examination of a young woman plagued with multiple personalities. The author does a stellar job in telling this story from the perspectives of key individuals: the woman herself, her spinster aunt (with whom she lives), and her psychiatrist. The narrative is taut, the characterizations are fully developed. However despite all this glowing praise the book lacks ... compassion. There is a complete lack of warmth in all the characters, and I found the psychiatrist to surprisingly cold and the only character lacking in believability; he seemed like someone pulled out of a Charles Dickens novel. Unfortunately the coldness of the characters bled off on to this reader, and towards the end of "The Bird's Nest" I began to lose interest in the plight of our poor suffering leading character. Bottom line: competent, serious and well written. But perhaps a bit too antiseptic for my taste.

Will the real Elizabeth Richmond please stand up?

Published by Thriftbooks.com User , 19 years ago
No writer has ever plumbed the depths of psychology as deeply as Shirley Jackson. While not as powerful as We Have Always Lived in the Castle or even Hangsaman, this novel does succeed in giving the reader a remarkable look into the mind of a disturbed individual. Elizabeth Richmond is a perfectly drab, mousy creature wanting nothing more than to pass her days as quietly and demurely as possible. A fragile emotional soul, she is tormented by terrible migraines and backaches. Her problems mount when her aunt begins accusing her of terrible things she has no recollection of doing. A trip to the doctor results in a referral to the good Doctor Wright, a man practicing psychology while proudly announcing he is not a psychologist. Using hypnosis, Dr. Wright comes to recognize and converse with three distinct personalities in his patient--the quiet, demure Elizabeth, the exceedingly nice and wonderful Beth, and the childish, prankster Betsy. Betsy, gaining more dominance over her other selves, manages to escape to New York to search for her mother. It is there that a fourth personality emerges, this one a spoiled brat who cares only about the money she is supposed to inherit. As the story progresses, Elizabeth's split personalities fight for dominance, often switching back and forth between one and another. Jackson gives us two (or maybe I should say five) viewpoints on the young lady's case. Most often, we are allowed to see things from Elizabeth's viewpoint(s), but in sections we are given an external, non-clinical account of events by Doctor Wright. We also see and learn much about Elizabeth's Aunt Morgen, who is quite a character and rather unbalanced herself. As the doctor pursues his therapy, we learn many things about Elizabeth's mother and Aunt Morgen's less than sisterly relationship with her, we pick up confusing images of a character named Robin from Elizabeth's early childhood, and we find a reference to Elizabeth's four selves once going in search of a bird's nest. I have to admit the bird nest thing escapes my comprehension, and I am still quite muddled about the Robin character. Of course, if the entire story made sense, this would not be Shirley Jackson. As it is, this is a wonderful example of character development as only Jackson could provide. Aunt Morgen is almost as mysterious as Elizabeth herself. While I sympathized greatly with three of Elizabeth's personalities, including the mischievous one, I strongly disliked the fourth. With the constant switching between selves, I found myself hating Elizabeth one second, and caring for her the next. I regarded Aunt Morgen at different times as a fool, a wretch, a loving aunt, and a neurotic. Dr. Wright is a rather ambivalent character, although he is given to fits of exasperation when Elizabeth's case or her aunt frustrate him. Jackson ingeniously made one of the four personalities left-handed; this allowed her a most telling and effective means by which to have two

Published by Thriftbooks.com User , 23 years ago
Jackson maintains her usual bone chilling expression in The Bird's Nest. She provides a great psychological view of multiple personality with nothing less than perfect storytelling.
Copyright © 2020 Thriftbooks.com Terms of Use | Privacy Policy | Do Not Sell My Personal Information | Accessibility Statement
ThriftBooks® and the ThriftBooks® logo are registered trademarks of Thrift Books Global, LLC