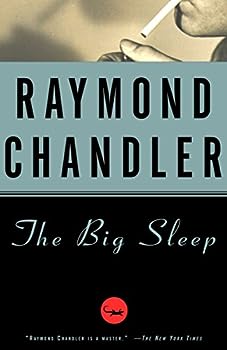 (Book #1 in the Philip Marlowe Series)

The renowned novel from crime fiction master Raymond Chandler, with the quintessential urban private eye (Los Angeles Times), Philip Marlowe - Featuring the iconic character that inspired the... This description may be from another edition of this product.

This is where it all began

Published by Thriftbooks.com User , 19 years ago
Raymond Chandler's very first attempt at a detective novel was a clear winner. The Big Sleep features a complex plot and a fantastic character - Philip Marlowe.Chandler set his story in the gritty streets of Los Angeles, with a detective who was known for doing the right thing rather than what he was told to do. Philip Marlowe became an instant icon not only amongst mystery and detective fans, but among readers everywhere. When this became a movie in 1945 with Humphrey Bogart and Lauren Bacall, even though the movie cut out a lot of the plot complexities, the characters affected the lives of millions.Chandler's writing style is simply phenomonal. He describes the ins and outs of the city and its suburbs, giving you vivid impressions of that world. He moves from lush mansions to dingy bars, with each character having strong motivations, backgrounds, reasons for being. In a time when minorities were discounted as meaningless and women were considered the "lesser sex", Marlowe plows right in with a fair eye for all. He takes on work with blacks that others disdain. He treats women as being intelligent while others discount them. The stories talk about homosexuality and porn and other topics as a "part of life". It's interesting how much of the books had to be 'white washed' to be made into movies.If you read this story and then read many of today's detective stories, you can see clear traces of what Chandler began in the works of others. His style, his incredible humor, his honor and justice. His desire to do what was right even when others around him pushed him to do the "easy thing". A Big Sleep is a must read for any mystery fan, to see where it all began.

Published by Thriftbooks.com User , 20 years ago
Another book in my quest to read the classics - A great addition to the list! I am a big fan of mystery books such as Sue Grafton's alphabet series...now I see how the genre began. Raymond Chandler sets the bar for other PI novels to follow.THE BIG SLEEP introduces us to Phillip Marlowe - a sarcastic PI with a unique perspective on things. Marlowe is hired by an aging rich man to find out who is blackmailing one of his daughters. Marlowe finds out the blackmailing is only the beginning of a tangled web of intrigue. There are two murders that seem unrelated at first, however as the book progresses Chandler does a wonderful job of weaving them together. Chandler's writing style is pure joy to read....each scene is described in great detail, you feel like you are there. I love Marlowe's dialogue - tough, sarcastic and to the point. The BIG SLEEP is a classic mystery any fan of mystery novels should read.

Published by Thriftbooks.com User , 22 years ago
This is the best of the best when it comes to Raymond Chandler. I am a long time fan of the detective novel and this one ranks top on my list. I read The Big Sleep along with David Lehman's reissue of "The Perfect Murder: A Study in Detection" and found the two books perfect companions for anyone who loves the classic WHODUNIT.

Published by Thriftbooks.com User , 22 years ago
It's often been said that Raymond Chandler is the quintessential writer about Los Angeles in the 1940's in the way that Faulkner fictionalized the American South. The Big Sleep is the best example of Chandler's affinity for the city, particularly in the light of it's unique blend of pre-fabricated history associated with the film industry and the pre-Hollywood era. That being said, it's a bit ironic that we tend to think of Philip Marlowe as personified by Humphrey Bogart, even though he's been played by several actors over the years and the film of The Big Sleep is markedly different from the book."Chandleresque" suggests a certain style of writing and of using metaphors and language that can't really be described to anyone unfamiliar with his work without lapsing into stereotype. For any other mystery writer, that would be a negative, but since Chandler is the man who, with The Big Sleep, more or less invented the detective novel as we know it today it's astonishing to read and realize what kind of impact it might have had on those who read the first printing.The Big Sleep introduces Philip Marlowe as the private eye who is both uncorruptable and one step ahead of his antagonists. His characterization is what drives the story, which as mysteries go is not the most suspensful or even all that mysterious. Indeed, the "mystery" such as it is is barely given notice by Chandler, short of the necessities. While there are some good plot twists, they seem to come together in a generally haphazard manner. None of that matters, because the main interest is in what Marlowe will do next and how he will react. Chandler creates some interesting supporting characters as well, but they float in and out of the story overwhelmed by the protagonist.The Big Sleep is an excellent starting point for getting re-acquainted with classic detective fiction and exploring the development of the genre. It's a relatively quick read as well, which helps the suspense build and leaves you wanting more. It's also a classic vessel for channeling the aura of Los Angeles as it was in what we consider to be its heyday, and what Chandler considered to be something else altogether.

Published by Thriftbooks.com User , 23 years ago
A work so complex that even the author didn't know exactly who did what to whom and why may sound confusing to your average reader of mystery stories--especially one who wants the plot resolved neatly and tidily. Yet Raymond Chandler's The Big Sleep pulls it off remarkably. A lesser writer never would have succeeded, however, Chandler's prose is so captivating, and Philip Marlowe is such a an endearing scoundrel, that it is easy to over-look such trivialities as plot. Although he was an obsessive, Chandler never was one for neat and tidy plots. In fact, as he even admitted, he wasn't much for plots at all. In this book, considered by many to be his finest, he achieves his highest unity of dialogue, plot and characterization. Philip Marlowe seems to skulk across the page in a glancing fashion (and if that makes sense to you, you HAVE been reading too much Chandler). Wry, self-depracating, witty, and unfathomably intelligent, he becomes the shop worn galahad, the original noir detective. If at times the lines seem a bit cliched, the film noir quality painted on a bit thick, the reader must keep in mind, this is where it came from first. Without Raymond Chandler, there would have been no Blade Runner. As both a linguist and a writer, I am infinitely in love with both Chandler's work and Philip Marlowe. There is an intelligence in this prose that is rarely found anywhere, let alone detective fiction. And his similes and metaphors are simply the best anyone has ever written. I read my first Chandler while working on an honors research project as an undergrad and was so captivated I read all of his stuff straight through. If you only have time to read one or two of his works, start here and then read Farewell My lovely, but I gaurantee, anyone who loves words and the American Language won't be able to stop there.
Trustpilot
Copyright © 2022 Thriftbooks.com Terms of Use | Privacy Policy | Do Not Sell My Personal Information | Cookie Preferences | Accessibility Statement
ThriftBooks® and the ThriftBooks® logo are registered trademarks of Thrift Books Global, LLC