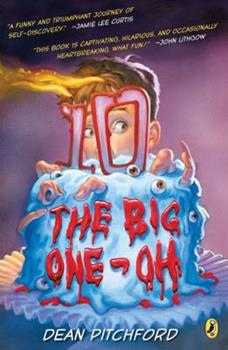 Charley Maplewood has never been one for parties? that would require friends, which he doesn't have. But now that he's turning ten'the big oneoh? he decides to throw a birthday party for himself. Of course things don't work out as he plans. In trying to make friends, he ends up inviting the class bully, and that's before he ruins the cake and sets the garage on fire. Will Charley be able to pull it together before the big one-oh . . . becomes the...

Published by Thriftbooks.com User , 12 years ago
I wish this book had been around when I was a kid. Excellent story and delivery. Easy to read and a good message for all at the end. A true success! Every child will enjoy this story.

Published by Thriftbooks.com User , 13 years ago
I did not read this book myself but my 10 year old son did. He loves to read but will only read particular books. Well, he would not put this book down. He loved it!

Published by Thriftbooks.com User , 13 years ago
The 7, 9, 11 and 38 year olds in our family all agree that this was a delightfully fun story to listen to. The author provides all the voices for the CD in a way that adds so much warmth and humor to an already very entertaining story. You can't help but like Charlie, the almost-10-year-old birthday boy who is earnest, but socially awkward and melodramatic about everything. In the very beginning, Charlie foreshadows that his birthday party will go horribly wrong, and we get to enjoy seeing Charlie try to make everything work out even through all the cringe-worthy mistakes and misfortunes he experiences as he waits with anticipation and dread for the big day of his party. Don't miss this story -- it is memorable and so fun!

It's a classic horror birthday party

Published by Thriftbooks.com User , 14 years ago
How do you describe a book that had you laughing non-stop for three chapters and enjoying off-and-on guffaws and spontaneous sniggers throughout the rest? THE BIG ONE-OH will appeal to 99.9 percent of the fourth- and fifth-grade boys who read it and, I might add, to their parents. Charley Maplewood once went to a birthday party that included runaway ponies, shrieking kids and a smashed cake. He determined never to go to another one again. That was three-and-a-half years ago. Charley is now approaching the big one-oh, his 10th birthday, which means he'll be be moving from single to double digits. His dad, a chef in Scotland, sends him a card and asks him what he'll be doing to celebrate. Obviously this was something that birthday-phobic Charley had not considered, but now he begins to dwell on what a birthday party could be like. Since he has no friends, who would he invite? Charley has a few idiosyncrasies. He likes to cook and prepares gourmet meals for his mother almost every night. Rather than hanging out with kids his own age, he prefers to spend his time reading monster comic books. On the night his mother brings her boyfriend home for dinner, Charley is wearing a hairnet and making food. Is he a freak? Charley thinks he's normal, but apparently his mother's boyfriend doesn't agree. On the other hand, Charley's neighbor appears to be a true oddball. He has fake body parts lying around for dogs to run away with. As she's leaving him, his girlfriend, "Pincushion," yells back at the house that he's too weird, that she can't take it anymore, that he has no friends, and that he's a freak. The coincidence of having heard these thoughts twice in 24 hours convinces Charley that he should have a party and find some friends. But how? Surprisingly, Charley and his neighbor share a few similar hobbies. They quickly become friends despite their age difference --- he's old enough to be Charley's dad. It turns out that he is a special effects man with a specialty in bloody body parts. As Charley begins his very structured effort to plan a party for his big one-oh, I found myself unable to put the book down. I also realized that I was disturbing my household with too much laughter. "How dare you laugh out loud while reading!" You might be able to guess what the birthday party theme is, but the events that lead up to the celebration are as unpredictable as the guest list. Author Dean Pitchford seems to have a talent for recognizing and articulating the gross-out factor that appeals to young boys, while understanding the boundary between humorous and disgusting. On the night of the party, a neighbor is shrieking, the fire department appears with the police, and the bully dirties his pants as the pretty girls throw up. It's a classic horror birthday party, and this book is a classic waiting to be recognized by 99.9% of the country's 8- to 10-year-old boys. --- Reviewed by Patsy Side

Destined to become a classic.

Published by Thriftbooks.com User , 14 years ago
I know that "classic" is used for just about everything with a cover these days, but I truly believe that "The Big One-Oh" has the potential to be the unique book that lives up to the hype, and remains on library shelves and reading lists for generations to come. I read literally dozens of books in this genre every year and most of them get tossed aside after three or four chapters - if not pages. No - I'm, not trying to relive my childhood. I make my living writing television and movies for the young adult - 8 - 13 - demographic. Disney Channel's "Twitches", "Halloweentown High", and televisions "Sabrina, the Teenage witch" to name a few. And this is the first book that I've ever been truly compelled to pass on to my neices and nephews. If fact, it's the first book that's ever compelled me to sit down and write a review. Writing boys in a fresh, interesting, truthful way is extremely difficult and Mr. Pitchforn completely nails it. Charley Maplewood, our hero, is funny, mischievious, flawed and somebody you're cheering on from the very first page. There's also a wonderful gross out factor - beautifully captured on the cover - that should encourage even the most reluctant readers to keep turning the page. Monsters, body parts, and birthday cake... it's what little boys are made of. Read it.
Copyright © 2022 Thriftbooks.com Terms of Use | Privacy Policy | Do Not Sell My Personal Information | Accessibility Statement
ThriftBooks® and the ThriftBooks® logo are registered trademarks of Thrift Books Global, LLC