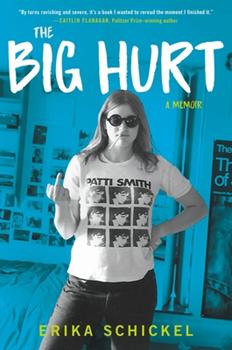 The Big Hurt: A Memoir

A memoir of growing up in a fractured, literary family, of being seduced by a teacher and kicked out of boarding school, and then doing it all over again in middle age. In 1982, Erika Schickel was expelled from her East Coast prep school for sleeping with a teacher. She was that girl--rebellious, precocious, and macking for love. Seduced, caught, and then whisked away in the night to avoid scandal, Schickel's provocative, searing, and darkly funny...

The Big Hurt - a must read memoir for women

Published by Lydia The Reader , 11 months ago
Ericka Schickel’s memoir spoke to me - a woman born in the early 60’s to smart, ambitious, and damaged parents - making sense of her place in her biological family, within the world, with lovers, teachers, teachers who were also lovers, predators and men who were ultimately footnotes. Never self-pitying but often heartbreaking - I slowed down reading to not rush to the end. Really a gem.

Privileged white woman blames everything on The Patriachy

Published by Disappointed reader , 1 year ago
In Afghanistan women’s shelters have closed because women fear being killed, beaten, raped or sold into slavery. They will not be educated, and they will have no ability to work. Meanwhile, Manhattan bred private and Ivy League educated daughter of rich white people, Erika Schickel blames a lifetime of bad decisions and bad actions on the patriarchy. Shoplifting and drugs? Blame dad. Cold mother? Blame a guy mom slept with in college. Mean to her own kids? Blame mom, and therefore the guy she slept with. Have an affair and tell your husband in an especially cruel way? Not her fault - blame all the other men in her life, including the men who bankrolled her privileged existence. Schickel asks herself whether she could somehow find an excuse for being a “bad girl” and the book is just that - a 300+ page “met too” era excuse guidebook for every privileged woman who was/is a bad person or did bad things. In an era where we are finally hearing the voices and stories of womxn, BIPOC and other folk who have legitimately struggled and overcome oppression, this story came off as an attempt to awkwardly reframe her life within a more relevant modern context.
Trustpilot
Copyright © 2022 Thriftbooks.com Terms of Use | Privacy Policy | Do Not Sell or Share My Personal Information | Accessibility Statement
ThriftBooks® and the ThriftBooks® logo are registered trademarks of Thrift Books Global, LLC