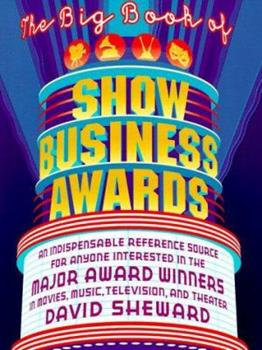 This reference book covers all major show business awards, allowing the reader to see how Academy Award winners in a given year compared with Golden Globe winners, or how Tony Awards stacked up against Drama Desk honours, etc. The book also contains historical information, gossip and trivia.

Published by Thriftbooks.com User , 22 years ago
Sheward does a fantastic job of corralling the major awards in four showbiz areas: Movies, Music, Television, and Theatre. He features the major award in each area (Oscar, Grammy, Emmy, Tony) by giving the nominees and an indication of what award year was like. He also gives the winners in a variety of "lesser" awards like Golden Globes, Cannes Film Festival, and Drama Desk Awards. The book truly is an indispensible resource if this sort of thing matters to you. There is the problem with keeping the thing up to date, which is forever a problem with printed sources; but that's hardly Sheward's fault. Two minor quibbles, though. The index would be considerably more useful if all the nominees were indexed; presently, Sheward indexes only the award winners and then only for the four major awards. So if you wanted to know which year Rosanna Arquette earned a Golden Globe nomination, you're doubly out-of-luck. And also, for older awards years, only the winners in certain (admittedly minor) categories are listed. But sometimes you just really need to know ALL five nominees for the 1963 Best Original Song Oscar. Sure, you could hop online and find all the info in the book, but it would take you hours. Sheward's got it all in one place for you, and in a highly readable format. It's handy, it's dandy, and the oldest Oscar winner was Jessica Tandy. (See, it can even help you write nonsense verse!)
Trustpilot
Copyright © 2022 Thriftbooks.com Terms of Use | Privacy Policy | Do Not Sell My Personal Information | Cookie Preferences | Accessibility Statement
ThriftBooks® and the ThriftBooks® logo are registered trademarks of Thrift Books Global, LLC