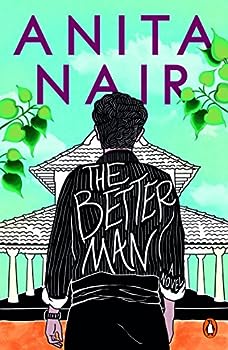 This description may be from another edition of this product. A magical, inventive novel about one man's struggle to find his place in the small Indian village of his birth In Anita Nair's warm and imaginative first novel, middle-aged Acuthan Nair returns home...

Published by Thriftbooks.com User , 20 years ago
A simple tale told in a very beautiful manner. With the use of simple language, but still not losing the charm, Anitha Nair has done a wonderful job. Simplicity, detailing of characters and environment, and a good story are the trade marks of this book. Picturized in the malabar region of kerala, in a village called kaikurussi, the novel tells the story of a man,Mukundan who returns to his village to settle down after retirement. But he realizes that his life is still in the clutches of his tyrant father, whom he was always afraid of. He starts believing that he's indirectly responsible for his mothers death. He even starts hallucinating of his mother's ghosts. It takes the help of a painter by name Bhasi (who is known as one screw loose bhasi) to help him out of his misery and realize that his fears are baseless. Mukundan is made to be reborn out of a clay urn, shaped like a woman's womb. But soon mukundan dismisses bhasi and his love anjana for the sake of power and name in the village. Later at the end of the story mukundan regains his diginity and emerges as The Better Man free from his fears. Anitha nair has taken the finest care to portray the village ,the villagers, their beliefs and customs. Truly a brilliant work.

Published by Thriftbooks.com User , 20 years ago
Set in the Malabar region of Kerala, this story shows how Nair can weave imagination with realism. Mukundan Nair, the protagonist returns to his village to be overshadowed by his tyrannical father. His fear of his father does eventually diminish with the end of the book as he emerges as the better man. But on the way, he enlists the help of One-screw-loose Bhasi who plies him with herbs and at one point has him sitting in a clay urn which is in the shape of a woman's womb, so that he can be born again without his emotional hangups! Mukundan is a man whose character is under attack. He can succumb to greed and flattery, but he doesn't. He wins the respect of the villagers without loosing his own self-esteem. Nair is a natural storyteller but what I like is that she doesn't turn India into exotica.
Copyright © 2020 Thriftbooks.com Terms of Use | Privacy Policy | Do Not Sell My Personal Information | Accessibility Statement
ThriftBooks® and the ThriftBooks® logo are registered trademarks of Thrift Books Global, LLC