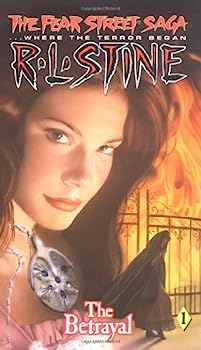 (Book #1 in the The Fear Street Saga Trilogy Series)

This description may be from another edition of this product. Nora knows the secrets behind the horrifying things happening on Fear Street and reveals the dark legacy that marked the start of the terror three hundred years earlier, when a young girl was burned...

An intriguing story with a chilling climax

Published by Thriftbooks.com User , 16 years ago
I decided to read a few of R. L. Stine's work after a long time. Unable to put the book down, I finished reading it within a few hours, and was not disappointed when I finished. This just show that Mr. Stine can keep a reader of any age interested in his books. `The Betrayal' by R.L. Stine is the first book in the `Fear Street Saga' series. The story starts off with Nora Goode, a girl who runs out of a burning mansion, frantically searching for someone named Daniel, hoping that he escaped the fire too. After she sees the horrors of the mansion burning, she writes down a story which takes place 300 years before; about a gruesome tale of a feud between two families that would last on for centuries. We go back in time to 1692 and meet the members of two families, The Goodes and the Fiers. Benjamin Fier, the Magistrate, and his brother Matthew Fier, are one of the most trusted and rich people in the Wickham Village. William Goode is a simple farmer, who lives with his wife Martha and their children, 16 years old Susannah and baby George. Susannah is in love with Edward Fier, son of Benjamin. Susannah and Edward secretly meet in the woods and declare their love for one another. However, things start going very wrong when Edward tells Benjamin about his love for the farmer's daughter. `The Betrayal' definitely lives up to its name. People in this book get betrayed in love and money between their enemies and loved ones. The book ends in a very mysterious note, which urges you to buy the next book in the series `The Secret' and continue reading. This is a good book to read. With an intriguing story and a chilling climax, you will not be able to stop reading.

Goode vs. Fier: Part One

Published by Thriftbooks.com User , 20 years ago
"The Betrayal" is the first book in The Fear Street Saga, chronicling the start of the Fear Street curse. The story begins in 1900 with the Fear mansion burning to the ground, killing everyone inside. Nora Goode is the only survivor, but she witnesses a horrible image through the window of the house--a young woman is tied to a stake and burned alive.The book quickly flashes back to 1692 in Wickham Village, Massachusetts Colony, where the latter young woman lives with her family. She is 16-year-old Susannah Goode, and she's in love with Edward Fier. However, his family forbids him to marry a poor girl like Susannah. To prevent them from eloping, Edward's father accuses Susannah of witchcraft, along with her mother.Yet before their death sentences are carried out, they're given one last glimmer of hope. Edward's uncle promises to arrange for their release if Susannah's father will pay for their freedom. Of course he does, but when the next day arrives, his daughter and wife are still burned. Apparently, the Fiers had fled the town that night after robbing everybody in it. Vowing to avenge his family's death, he invokes the Evil One (ironically, he was the one practicing black magic, not his daughter and wife) and sets out to create a vendetta between the Goodes and Fiers.I highly recommend this book to Fear Street fans. Once you've read "The Betrayal", you'll definitely want to finish this saga out with "The Secret" and "The Burning".

HORRIFYING AND DISTURBING...AND THIS IS JUST THE BIGINNING

Published by Thriftbooks.com User , 20 years ago
This is the book where R.L. Stine finally reveals why Fear Street is so haunting and terrifying. THE BETRAYAL starts out in the 1900s in Shadyside, Massachusetts. Nora Goode is a young girl who just lost her lover, Daniel Fear, in a terrible house fire that fire fighters couldn't even put out. Nora knows the terrible secrets of Fear Street and must let everybody know before it's too late.She's the narrator, and she starts writing a book about the street. Her story starts out during the 1600s in Wickham, Massachusetts - a time when witchcraft is a very dangerous gift to posess. Anyways, a young pretty girl named Susannah Goode lives with her family in the village and soon becomes attracted to Edward Fier the son of Wickham's "governer", Benjamin Fier. When Benjamin learns that Edward wants to marry Susannah because they are in love, Benjamin falsely accuses Susannah and her mother of practicing witchcraft because he believes Susannah is "not a perfect match" for Edward. So he ends up burning Susannah and her mother at stake. Furious, Susannah's father - who really does practice witchcraft - puts an evil spell on the Fier family that they will all die and pay for stealing his innocent family away from him.The first part in this saga ends when Edward finds out the truth about Susannah - it's several years later and Edward has been married to another woman - and her mother.THE BETRAYAL is a really great book and a must read for all FEAR STREET fans. It's so good you can't put it down 'til you've finished. I really recommend it, and I also recommend the other two parts in this saga: THE SECRET and THE BURNING. Awesome, fun books to read for a relaxing evening!

Published by Thriftbooks.com User , 21 years ago
Living in 1692 Massachusetts, Susannah Goode was an innocent, naive young girl. Her only mistake: loving the son of her family's bitter rivals, the Fiers. A young man whose angry father sentenced Susannah and her mother to burn at the stake. Leaving Susannah's father so devestated that he turned to the black arts and curses the Fiers for all eternity. Wherever the Fiers go, they taint the very ground with their pressence. No one who crosses their path can escape the curse - no matter how innocent or evil they are. And two hundred years later, innocent Nora Goode, whose like Susannah loved a Fier, pays the price - and now she must record the history of the evil that decimated the Fiers. I always wondered why so many bad things happened on Fear Street, and now I know - and it makes it that much more creepy!

The Best book about Fear Street

Published by Thriftbooks.com User , 24 years ago
Deep in the heart of Shadyside, a small, but lovely town, lurks a terror, far beyond those ever imagined. Fear Street. Murders, ghosts, Betrayal, Revenge and Dark secrets thrive on this infamous Road. But why DO so many terrifying things happen on Fear Street, and where did it gets it's name? The Evil goes far back in time, a story Nora Goode knows far too well. A story of Evil, an evil that has cursed the Fear family for generations, an Evil that destroyed Nora's one true love. Now Nora must tell her story. This is the first (and probably the best) of the Three Fear Street Saga books. Nora is the Narrorator, and her story goes all the way back to Wickham Village,Massachusetts, to Susannah Goode, a girl who is burned at the stake, accused of witchcraft because the father of the man she loves sees her unfit to wed his son. Susannah's father, a real witch, puts a terrible curse on the family, that will follow the Fiers (later changed to FEAR) through generations, will destroy the Fear family. Personally, this is the best book in the Fear Street series, beautifully written, it's best to have the second and third parts on hand, because once you start, you won't want to stop.

The Betrayal Mentions in Our Blog 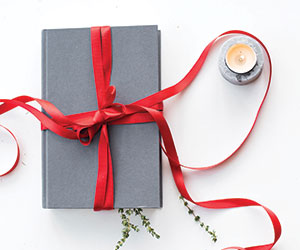 How We Choose Books as Gifts
Published by Bianca Smith • February 14, 2018