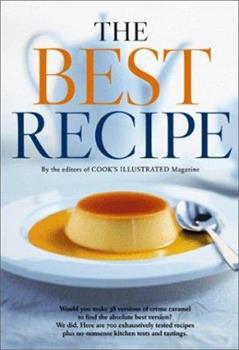 (Part of the The Best Recipe Series)

Founded in 1980, "Cook's Illustrated" (formerly "Cook's Magazine") has emerged as "America's Test Kitchen, " renowned for its near-obsessive dedication to finding the best methods of American home cooking. "The Best Recipe" presents a collection of edited, organized, and annotated recipes plus more than 200 illustrations.

The One Cookbook Anyone Who Loves to Cook Needs

Published by Thriftbooks.com User , 20 years ago
I've been buying cookbooks for decades. I'll buy cookbooks for just one recipe I'm dying to learn. The funny thing is, I'm really not that good of a cook, but I love working in the kitchen.This cookbook just blows me away. Just like the Cooks International PBS television series, it explains the why of cooking. Lasagne without ricotta? Beef marinade without acid? How could that be? The explanations are there, and they make total sense.I sit in my bedroom reading this book at night. I read about the things I already know how to make, looking for the subtle ideas to make them perfect. It's really not a cookbook even though it's got hundreds of recipes. It's more a book about cooking, and it's got me more inspired than all of the scores of books I've bought before.I'll give these guys the best compliment I can think of: I wish I had written it.

Published by Thriftbooks.com User , 20 years ago
After you've been cooking for a while, you start to ask yourself questions like, "Do I really need to add oil to my pasta water?" or, "What exactly is cream of tartar?" If you are interested in ingredients and combinations of cooking, this is the book for you. A year ago a friend turned me onto the magazine Cook's Illustrated which is fantastic. This book collects 700+ of their classics from the last several years in one place. More than the recipes themselves, I like the narrative of how they start with all the classic recipes and then do exhaustic scientific experiments (often consulting food scientists) until they have everything just right. Since I often do minor experiments myself and find that I've messed up an entire meal, it's nice to let the test kitchen take on this role. Even more gratifying, sometimes it turns out that the fancy complicated recipe does not produce better tasting results than a more streamlined one. I've cooked lots of these recipes and ever single one has come out perfectly. On top of the recipes, you will find answers to questions you just don't have time to figure out: which supermarket olive oil tastes best? Which tuna fish is the tastiest? What's the difference between rib eye, London Broil and Flank steak? I've never been so interested in a cookbook. I read the whole thing through over a long week of reading and can't wait to experiment by trying more of their recipes. If you like this book, subscribe to the magazine!

Published by Thriftbooks.com User , 21 years ago
This book makes substantial claims in its title. But the authors have a reason for their claims. This is not a book of recipes from one person's (subjective) viewpoint. Almost all the recipes were "arrived at" by a common process. 1. Collect various, diverse and classic recipes for a given dish. 2. Prepare the various recipes. 3. Test the results (usually results are tested by a substantial panel) 4. If applicable, consult food scientists regarding certain chemical or physical reactions or properties. 5. Produce a recipe which combines everything learned from the process. The result is a recipe which tastes best to most people. What also results are several benefits to the cook: 1) The recipes are often steamlined (if a traditional or classic technique does not produce flavor it is jettisoned). 2) The recipes usually revolve around a core technique that can be applied to other dishes in a cook's repertoire. 3) If the cook takes time to read all the work done by the editors he will be able to avoid many "mistakes" in his own experimenting.As to the reviewer's comment about so many meat+salt+pepper recipes, I believe he missed 2 things: 1) nearly all the recipes of that nature have significant seasoning/ingredient variations after the basic recipe, 2) the point of these recipes was the TECHNIQUE. When I was a neophyte "gourmet" I liked long recipes with complex techniques. Now that I'm older (and wiser) I can ALSO appreciate plain chicken or beef which truly have been well-cooked. But this book also gives you variety as well--there are Italian, Mexican, French, Asian, etc. flavors here along with the American standards.Having tried very many of these recipes I agree that they are usually "best". My family and friends also agree. The chicken brining technique and the hard-boiled egg recipe have become absolute in my own cooking. In the short time I have owned it, this book has seen more use than many of my old favorites because the results are so reliably "the best."

Keep this one on the kitchen counter!

Published by Thriftbooks.com User , 22 years ago
I'm an avid reader of Cooks Illustrated and several other cooking magazines. The Best Recipe now sits on my kitchen counter as the main cookbook and resource for most of our home cooked meals. Much of the research has been featured in past issues of the magazine, and deliver all the answers to why so many other recipes fail - and why this one, the "best" one, will succeed. I've cooked a lot of these recipes in the last couple of weeks and many throughout the years as a subscriber to Cooks Illustrated Magazine. Some people say there's no such thing as a "sure thing" but if there is, I think you'll find it in this book.

Published by Thriftbooks.com User , 22 years ago
This cookbook is AWESOME! It has every recipe that you could possibly want or need. The cool part is that they explain everything, including how to cut an onion and not cry and why it works. And to top it off, they not only tested recipes over and over, but tested different kinds of cooking equipment over and over and then give reviews. I liked it sooo much that I'm back buying one for a friend for Christmas. Happy Holidays!
Copyright © 2020 Thriftbooks.com Terms of Use | Privacy Policy | Do Not Sell My Personal Information | Accessibility Statement
ThriftBooks® and the ThriftBooks® logo are registered trademarks of Thrift Books Global, LLC