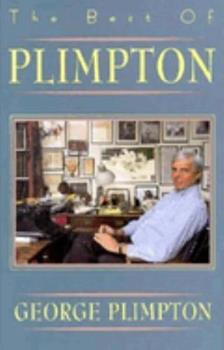 The Best of Plimpton

Collects the work of the distinguished editor, essayist, sportswriter, and adventurer from over his thirty-five-year career, featuring profiles, essays, articles, and other classics, such as The Amazing story of Sidd Finch.

Published by Thriftbooks.com User , 13 years ago
George Plimpton, an accomplished writer and a fine raconteur, has gathered in this book all of his writings that he considered to be his best and each story is superb. His recounting of taking Marianne Moore to the baseball game is one of the most finely-crafted portraits of both Moore and Plimpton that I have had the pleasure of reading. Interestingly enough, the second account of meeting with Marianne is not quite as jewel-like. If you read only one item in the book, I recommend "Music: An Address at a New York Philharmonic Lunch," It paints some hilarious images in my mind that even when I've stopped crying from laughing so hard only two hours later I'd think of some image again and start laughing. Thank you, George Plimpton and Leonard Bernstein for the "Winnipeg Effect".

Published by Thriftbooks.com User , 15 years ago
I rank Plimpton as a top five non-fiction writer of the last half century. Unlike a considerable number of these new age "creative non-fiction" writers, his ego is not all over the page nor did he have to stretch to introduce a literary flair to his prose. Plimption can make seemingly boring subjects such as bird counting contests or fireworks museums endlessly fascinating. He also does ample justice to racy subjects such as swinger conventions and his stay at the playboy mansion. Plimpton's writing is not pretentious and he always shows considerable respect and humor towards his subjects. A great writer and a great man.

Published by Thriftbooks.com User , 21 years ago
Plimpton's writings tend to be scattered in numerous different and dissimilar publications, thus making an anthology like this particularly useful.Plimpton is perhaps best known for his "participatory journalism," where he writes about his amateur forays into professional worlds, mostly of an athletic nature. But his appeal would be minimal if there were not a lot more to his writing than just this one gimmick.Certainly he handles that particular schtick very well. Sometimes he proves reasonably competent as the "amateur professional," and sometimes things deteriorate into what Hemingway called "the dark side of the moon of Walter Mitty," but at all times his writing is crisp and insightful. He is decidedly not an amateur when it comes to his powers of observation, interpretation, and articulation.Take, for instance, his discovery that playing in a symphony orchestra is inherently more stressful than participating in professional sports in at least one important respect, namely that in sports, mistakes and failures-as much as they might make the athlete feel momentarily embarrassed, as much as they might cause the coach to go into a tirade, and as much as they might cause fans to boo and criticize-are a part of the game. Every athlete frequently throws incompletions, misses free throws, strikes out, etc. The superstars are those who fail slightly less often than others. But mess up just once playing in a symphony for a perfectionist conductor like Leonard Bernstein and you'll find out pretty quickly that the level of tolerance for errors in that field is quite different indeed. The book is full of interesting insights like this.But I found that the other writings, on average, held my interest at least as well as the "amateur professional" participatory writings. There were pieces that, based on the subject matter, I might have guessed would be among the least interesting to me, that instead turned out to be among my favorites. Those pleasant surprises included two pieces about family and children-one about JFK playing with daughter Caroline on the beach in 1962, and one about Plimpton's experience of taking his own daughter to see his alma mater Harvard's classic rivalry football game against Yale. Also intriguing was a piece on poet Marianne Moore that introduced the reader to her unconventional mental world by, among other things, revealing the sorts of things she notices at sporting events. I could cite several other examples.I do have some minor quibbles with how the book is organized. The pieces are not consistently identified in terms of when the events in question occurred, when the piece itself originally appeared in print, in what publication it was originally published, whether the version of the piece in the book is the same as the original or has been altered, etc. Sometimes this type of information is stated, sometimes it can be inferred, and sometimes not even that. Some of the pi
Copyright © 2020 Thriftbooks.com Terms of Use | Privacy Policy | Do Not Sell My Personal Information | Accessibility Statement
ThriftBooks® and the ThriftBooks® logo are registered trademarks of Thrift Books Global, LLC