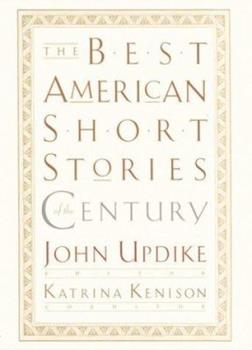 The Best American Short Stories of the Century

Since the series' inception in 1915, the annual volumes of The Best American Short Stories have launched literary careers, showcased the most compelling stories of each year, and confirmed for all time the significance of the short story in our national literature. Now THE BEST AMERICAN SHORT STORIES OF THE CENTURY brings together the best of the best - fifty-five extraordinary stories that represent a century's worth of unsurpassed accomplishments...

Published by Thriftbooks.com User , 20 years ago
I used to go to the library and read the old annual Best American Short Story collections. There was something almost religious about picking up a copy from 1927 and reading a story by a then unknown kid named Ernest Hemingway in that old type-face, or the Faulkner stories in just about every annual volume during the 1930s. The bios of these writers at the back of the old copies when they were unknown writers was so innocent and naive. Modern critical theory has influenced my perception of so many of these writers, and that is shame. The stories collected in this Best American Short Stories of the Century are taken from the the annual volumes. There are stories representing each decade from the teens to the 90s. There are classics, and there are surprises. My favorite is Ann Beattie's "Janus." It is subtle and masterfully written. I've owned this book for two years, and I read it from time-to-time. Some stories I've read four or five times. Some I haven't read at all. And it's a book that it's okay to do that with, I think. The Fitzgerald story "Crazy Sunday" was something of a nice surprise, and indeed, that kind of surprise seems at the heart of what Updike and Kenison were aiming to realize. How to make a Best of the 20th Century anotholgy exciting, you know? Considering they could only take stories from the annual Best of American Short Story anothologies, they did that well, I think. Martha Gellhorn's "Miami--New York" was insightful. The John Cheever, Raymond Carver, and Joyce Carol Oates stories are great classics. I enjoyed Donald Barthelme's "A City of Churches" and Tim O'Brien's "The Things They Carried" -- stories ranging from the humorous, to the heartrending. If I could make one suggestion regarding Best American Short Stories, it would be this: I think it would be interesting if every few years they allowed a so-called popular writer to read as guest editor. These stories end up representing a kind of intellectual clique. And it would be interesting to see what a guest editor like John Grisham or Stephen King would add to the mix of our nation's collective stories. Stacey Cochran Author of CLAWS: A Suspense Novel

Some of These Stories Really are Great

Published by Thriftbooks.com User , 20 years ago
Let's face it, superlatives sell. Who is going to buy a short story collection entitled: "A Collection of Well Written Stories from a Bunch of Different People, from 1915 to 1999". Not catchy and you can't dance to it. Another fact--there is no way that you could put together a collection of the greatest American short stories from the 20th century and have everyone agree on it. That being said, this is a very good collection of stories. I will admit, some bored me, some I really didn't like, but there is a lot in there and on the whole I think it's a worthwhile read. Some of the stories blew me away--particularly Alice Elliot Dark's In the Gloaming. Some, I couldn't even finish. As a whole, I am very glad I read them. This collection introduced me to a number of writers I had never read before, some I haven't read in a while, and some I read anytime anything new comes out. Of the stories I enjoyed (and that's most of them), I am appeciative of Updike's including them. This collection, while it has a few weak links, is strong and makes for enjoyable reading.

Published by Thriftbooks.com User , 22 years ago
I believe that most writers or short story readers will agree that these are not the "best" stories of the 20th century. Such a collection would include better known masterpieces like Shirley Jackson's "The Lottery," and Flannery O'Connor's "A Good Man is Hard to Find." Instead, this a collection of brilliant, but lesser known stories by accomplished writers.I think Updike makes it clear that his goal was to assemble great stories from all decades, but not necessarily the best stories. I believe there was a pointed effort made, in assembling these stories, not to include the well-known American standards that most college educated people have read. The New York Times sums up the result : "Finding wonderful stories that you don't already know is one of this collection's greatest pleasures . . Updike has made some surprising, even striking selections."Most of Updike's surprising selections are very enjoyable. My only disappointment was the 1999 story by Pam Houston. There are too many great writers these days to include this contemporary mediocrity. What about Rick Bass, Charles Baxter, Mark Richard? Just my opinion. Overall, I recommend this book without reservation.

Many happy hours of reading

Published by Thriftbooks.com User , 23 years ago
One of the things I have always liked about Updike is that he is willing to undertake something like this--even though it will inevitably make him vulnerable to criticisms like the ones raised in other reviews here. I can see why some omissions rankle: but, but BUT! Look at what's here! Almost all of the stories are nothing short of brilliant. Yes, "The Lottery" was probably amongst the best of the century, but it is anthologized everywhere in the universe: many of these are not. Many are not-so-well-known works by the best writers the 20th century had. I could quibble about many of the selections. For instance, I wouldn't have chose "Greenleaf" to represent one my favorites, Flannery O'Connor, or "The Killers" to represent Ernest Hemingway. But they're still great stories, worth including and worth reading. The best I think are those from the early part of the century, but that's probably my own bias talking. I'm not a fan of many of the representatives chosen for the latter half of the century, and the selection for 1999--yuck! But I'm willing to trust Updike's judgment over my own for a little while, and if he thinks Annie Proulx is worth reading...ok: It's worth a few pages of my time to find out. The anthology also does a good job of tracing in fiction the transformations of American culture: the first are immigrant stories, the next are primarily rural-based farming stories (A Jury of Her Peers--great story), and then the last are urban, ex-urban, and suburban stories. Read and enjoy.

Published by Thriftbooks.com User , 23 years ago
I bought this book a little dubious of its quality (mainly because the annual publication has so many glaring ommisions, such as John O'Hara and more contemporarily, Deborah Eisenberg), however I was pleasantly surprised. The selection amongst the famous authors are brilliant (I'm thinking specifically of Nabokov, Faulkner and Hemingway). There are also short stories I'd never heard of that are amongst the best I've ever read (Elizabeth Bishop's gem and E.B. White's hysterically brilliant story). Finally there is a list of stories that doesn't dismiss contemporary writers. It is nice to see writers like Raymond Carver, Ann Beattie, Alice Munro, Tim O'Brien and Anne Proulox be recognized. But I must once again bemoan the absence of perhaps the best living short story writer, Deborah Eisenberg.
Trustpilot
Copyright © 2022 Thriftbooks.com Terms of Use | Privacy Policy | Do Not Sell My Personal Information | Cookie Preferences | Accessibility Statement
ThriftBooks® and the ThriftBooks® logo are registered trademarks of Thrift Books Global, LLC