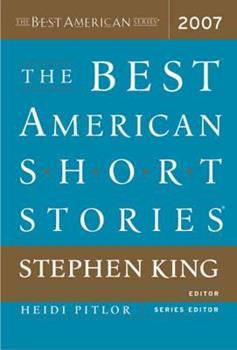 (Part of the The Best American Short Stories Series)

In his introduction to this volume, Stephen King writes, "Talent does more than come out; it bursts out, again and again, doing exuberant cartwheels while the band plays 'Stars and Stripes Forever' . . . Talent can't help itself; it roars along in fair weather or foul, not sparing the fireworks. It gets emotional. It struts its stuff. In fact, that's its job." Wonderfully eclectic, The Best American Short Stories 2007 collects stories by writers of...

Published by Thriftbooks.com User , 13 years ago
It's dangerous to be a character in this collection. If you're not committing suicide or getting murdered you're liable to have cancer or other terminal illness. Even after you're dead your body gets shifted around, which is what happens in five of the 20 stories, perhaps reflecting that Stephen King is one of the editors. Science fiction is, as usual in this series, under-represented. Bruce McAllister's "The Boy in Zaquitos" is the only one from a science fiction magazine. None of the talents is completely new. I own books by seven of the contributors (Auchinloss, Barth, Beattie, T whatsisname Boyle, Mary Gordon, Alice Munro and Richard Russo). Two of the stories (Russo's "Balto" and Kyle's "Allegiance") are about children caught in the tension between warring parents. Perhaps you could include Munro's "Dimension" in that category; it's the grisly ultimate in using the kids as a weapon in a marital dispute. There was very little humor, except perhaps for satirical overtones in Auchinloss's "Pa's Darling," Barth's "Toga Party," Epstein's "My Brother Eli"and Karen Russel's brilliantly original "St.Lucy's Home for Girls Raised by Wolves, " and the oysterism of "The Bris."

Published by Thriftbooks.com User , 13 years ago
Over the years, we have given each edition of this book to our daughter who is a teacher. She remarked that this edition is the best one of all. I then purchased it for my husband who is very positive in his comments regarding the book. Both claim that Stephen King shines as the editor.

Worth it for the King essay alone...

Published by Thriftbooks.com User , 13 years ago
I'm a HUGE Stephen King fan. Always have been, always will be. I am also a fan of The Best American series. So, when I discovered that King was the editor of this year's Best American Short Stories, I was duly excited. (Of course, I had to remind myself that he didn't actually write these stories.) Therefore, I was disheartened when a friend whose opinion I value had no interest in this year's collection because she "hates Stephen King." Now, I know she meant his writing - or, more accurately, genre writing (as opposed to literary fiction) because I don't think she's ever actually read anything by King - but how should that reflect on his ability to edit a short story collection. Well, Stephen King is an excellent editor. One of the things I love about him is that he understands why people read. Therefore, he understands what is wrong with the American short story these days. Writers "write for whatever audience is left. In too many cases, that audience happens to consist of other writers and would-be writers who are reading the various literary magazines...not to be entertained but to get an idea of what sells there. And this kind of reading isn't real reading...In 2006 I read scores of stories that felt...airless, somehow...written for editors and teachers rather than for readers." Beautiful - couldn't have said it better myself. (And King says it better in the book - notice all those ellipses?) The stories in this collection were written for the reader. All collections such as these are somewhat arbitrary. You might have a different list of stories that you loved. Yet many of these stories - "Balto," "The Toga Party," "Eleanor's Music," and others - achieve greatness. They stick in your mind long after you've read them. With the modern American short story, I too often find myself asking: "Didn't I read this one already?"

Solid Themes Keep the Series at a Top Level

Published by Thriftbooks.com User , 13 years ago
While not all stories will please everyone, the 2007 edition has some strong stories. Here is a brief breakdown of some highlights: 1. T.C. Boyle "Balto": A teenage girl must choose between speaking the truth and defending her alcoholic emotionally-arrested father in a tale that recalls Faulkner's "Barn Burning." 2. Joseph Epstein "My Brother Eli": Epstein poses the question does the artist enjoy higher privileges than the rest of us in a story that must be about Saul Bellow. 3. Stellar Kim "Findings & Impressions" A widowed father, also a radiologist, meets a breast cancer patient who makes him confront love, death, and loss in a non-sentimental, moving portrait. The story recalls Thom Jones' "I Want to Live." 4. Aryn Kyle "Allegiance" An elementary school girl learns how desperate we all are to conform and belong to the group in a story that focuses on the social politics of grade school. 5. Alice Munro "Dimension" An abused woman can't break the bond between her and her murderer-husband in a tale of self-abnegation that reminds me of a Joyce Carol Oates essay "They All Just Went Away." 6. Karen Russell. "St. Lucy's Home for Girls Raised by Wolves": Wolf-girls are raised by nuns and learn that price one must pay to "become civilized." 7. Richard Russo. "Horseman": A middle-aged lit professor is revealed as a fraud and a cipher with nothing to show for her scholarship other than her blind ambition.

Kids, Christmas is early this year.

Published by Thriftbooks.com User , 14 years ago
I saw this collection a few days ago, but it wasn't until I read Stephen King's essay in the NYT Book Review, which is also the (edited) introduction of this year's collection, that I flew back to the bookstore to pick it up. I have been up all night, each night, reading it since. EACH story is spectacular so I won't go into details about each one; I can't speak on old favorites being chosen, but perhaps it's because they are amazing writers who put out amazing work each year?!?! Don't let anything stop you from picking up this book. If there's anyone who knows a thing or two about storytelling, it's Stephen King. And if there is a collection that will blow you away, as King says stories should do instead of being written for teachers and editors, it's THIS ONE. I love how the authors talk about their inspirations for the stories in the back of the book, and all of the other books of theirs you may be turned onto because of their inclusion in this volume. For example, as *soon* as the bookstore opens, I am buying everything William Gay has ever written. I can't wait to discuss these stories with others who are reading, so hurry up and get this!!!
Copyright © 2020 Thriftbooks.com Terms of Use | Privacy Policy | Do Not Sell My Personal Information | Accessibility Statement
ThriftBooks® and the ThriftBooks® logo are registered trademarks of Thrift Books Global, LLC