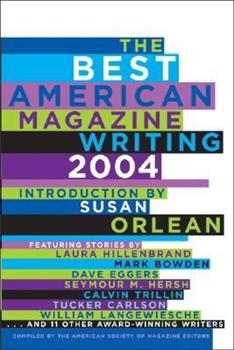 by American Society of Magazine Editors and Susan Orlean

In the magazine world, no recognition is more highly coveted than an "Ellie," presentedby the American Society of Magazine Editors. Selected from thousands of submissions, the pieces in this anthology represent the very best of those -- outstanding works by some of the most eminent writers in America: Laura Hillenbrand (Seabiscuit) on living and creating with chronic fatigue syndrome Dave Eggers (A Heartbreaking Work of Staggering Genius) on love...

And the Winner Is

Published by Thriftbooks.com User , 16 years ago
The Best American Magzine Writing series is edited in 2004 by Susan Orlean, who wrote "The Orchid Thief," which became the movie, "Adaptation, " in which Orlean is played by Meryl Streep. This incredibly bright writer, who came to the New Yorker from an Oregon weekly, has a masterful eye for great writing. Much the way a top museum curator chooses what to add to a collection, editors choose not only what they love for "prize collections" like these, but they, at their best, try to cull a representative sample from an array of styles. Orlean has delivered, as she chooses works from, mostly, the New Yorker, the Atlantic Monthly, and Esquire. Dave Eggers ("Zoetrope: All Story") is a well-known star in the fiction-writing universe, but his work is getting even better, and while he plays with style, his experimentation always serves the story, and his wit is never inappropriate. In a stunning article about a photograph that stunned America and the world, Tom Junod uses the space and freedom-from-rules that magazine articles offer over newspaper journalism to craft an eloquent, unsettling portrait of the photojournalist who snapped the picture of a man jumping from the WTC Tower on Sept. 11. Though these are all cutting-edge, top-tier articles, the role of women in the book, as authors and subjects, is subjugated to well, writing about fluffier topics and topics of (supposed) interest to women. We should expect Esquire and GQ to be writing for men, but it is disturbing that so many of the Magazine Award winners from which she is choosing are men, and are from "men's magazines" (we thank the universe for the Utne Reader and Ms. and Mother Jones). But it's a small quibble, and the controversy will continue, while the writing, meanwhile, should be admired no matter what the author's gender. Read this book every year if you're getting behind on your New Yorker and Atlantic Monthly, to simply read the best in mainstream magazine publishing, culled by top editors. Kudos to whomever chose Orlean this year; she's done a superior job with what she was given.

Writers and Readers...read this book!

Published by Thriftbooks.com User , 17 years ago
The introduction alone was reason enough for me to buy this book; it was written by Susan Orlean, one of my favorite writers. I also own the 2002 Best Magazine Writing, which I wholeheartedly recommend (be sure to read "Dr. Daedalus" by Lauren Slater). This new edition did not disappoint me. I was especially moved by the essay, "The Falling Man" by Tom Junod, which attempts to unveil the mystery behind a man who jumped from the World Trade Center after it began to crumble. Another one you shouldn't miss is the highly depressing yet mouth-dropping essay "A Sudden Illness" by Laura Hillenbrand. You will appreciate your health tremendously after reading the horror that she experienced. I'm not particularly interested in reading about Iraq because it brings up too many strong emotions, but despite that "The Killer Elite" (part one) by Evan Wright, is an extremely powerful and important read. It is a very vivid insider look on what it's like to be in the war, and how it affects the soldiers who fight there. It's a glimpse into their behavior and how they are able to do what they do. (Think: Abu Gharib.) Here's a list of all the 18 essays in the book: "The Dark Art of Interrogation" by Mark Bowden (about prison torture) "The Marriage Cure" by Katherine Boo (about Bush's plan to save marriage; it follows two women who take a marriage class) "The Killer Elite" (Part One) by Evan Wright (about Iraq war and American soldiers; follows one American platoon in Iraq) "The League of Extraordinary Gentlemen" by Tucker Carlson (comic piece; about black leaders, Al Sharpton included, trying to make peace in Africa) "Housewife Confidential" by Caitlin Flanagan (funny piece; tribute to Erma Bombeck) "The Stovepipe" by Seymour M. Hersh (about exposing the selective intelligence used by Bush administration to justify Iraq war) "Columbia's Last Flight" by William Langewiesche (very vivid account of the investigation into the Columbia shuttle crash) "The David Kelly Affair" by John Cassidy (about a British weapons scientist who commits suicide, after pressure about the Iraq war) "The Vulgarian in the Choir Loft" by Andrew Corsello (hilarious yet moving piece about finding spiritual nourishment by singing in a church choir) "The Red Bow" by George Saunders (fiction; about a town that dips into hysteria) "Newshound" by Calvin Trillin (personality profile of journalist R.W. Apple, an entertaining journalist) "A Sudden Illness" by Laura Hillenbrand (author of Seabiscuit; about her fight with chronic fatigue syndrome, trying to live with it while writing and maintaining a relationship) "Wynton's Blues" by David Hajdu (personality profile about Wynton Marsalis, a jazz artist) "The $20 Theory of the Universe" by Tom Chiarella (hilarious account about how $20 can be used to bribe anyone to do anything) "My Big Fat Question" by Michael Wolff (about Iraq war, which resulted in a threat from the military) "The Confessions of Bob Greene" by Bill Zehme (a personal account about
Copyright © 2020 Thriftbooks.com Terms of Use | Privacy Policy | Do Not Sell My Personal Information | Accessibility Statement
ThriftBooks® and the ThriftBooks® logo are registered trademarks of Thrift Books Global, LLC