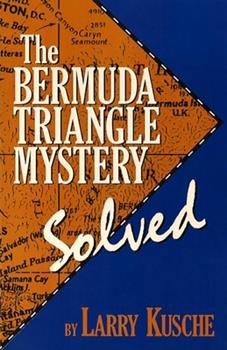 The mystery of the Bermuda Triangle had been told and retold in books, magazine articles, and on television and radio talk shows for several years when, in 1972, Larry Kusche, then a reference librarian, decided to collect all the information he could find on each incident. He made contact with the Coast Guard, the Air Force, Lloyd's of London, and many other agencies. He obtained microfilm copies of newspapers from cities where various incidents...

a light of truth in the darkness of hype

Published by Thriftbooks.com User , 19 years ago
Until I moved to the Bay Area of California in 1972, I had never heard of the Bermuda Triangle. This is significant because for the ten years previous I had lived in Indialantic, Florida, fished regularly in the Gulf Stream and had made a few passages to the Bahamas. What those of us who actually lived in the area and sailed the waters did not know was that some creative people had been generating a sensation, and a good bit of revenue, by spinning a wild myth out of misinformation and a few isolated disappearances. And let's face it, in the age before geolocators and satellite systems, there were several disappearances at sea every year. Actually, there still are. The ocean is a big, deadly pace.Flight 19 is a classic example. On a training flight, the trainer's instrument panel went out. Not unheard of. He turns navigational duties over to a trainee; again not unheard of and understandable under the circumstances. The trainee has trouble with his readings, so the flight eyeballs the surface to see were they are. They see the Bahamas, but think they're looking at the Florida Keys. Going above the clouds, they sight by the sky and head for Florida. Tragically, that course carries them over the open Atlantic. Throughout all of this, ground control can hear their radio chatter, but the planes can not hear base. In those days this was a fairly common occurrence with the primitive radio systems available. A plane was dispatched to intercept and rescue the wayward pilots. What happened aboard that plane really is a mystery. According to witnesses, it exploded in midair over the ocean within sight of land. However, by the time it was verified the first plane was lost (remember, this was before or modern instant communications and flight transponders) and another could be dispatched it was too late. Though three position due east of New Smyrna had been calculated by those on shore, Flight 19 had gone down in the swiftly flowing currents of the Atlantic. Rescuers literally had no idea where to look.Charlatans used this tragic story to manufacture a myth. The failed instrument panel became wildly spinning compasses, the instructor telling the other trainees to follow the one he designated navigator instead of him became a desperate warning to rescuers not to try and follow. A mysterious message about the sky and sea seeming "wrong" was manufactured. (Often quoted, by charlatans and true believers alike, but still false.)Other examples include the Revnoc, which went down in 40-foot seas during one of the worst hurricanes of the decade. In legend, it disappeared in front of witnesses in bright sunlight while sailing on a calm sea. A sulfur ship which sank in the Gulf and a freighter that disappeared off the coast of Africa are also included in the chronicle.Some disappearances are not explained. The ocean is very big, very secretive, and very unforgiving. The nature of the environment -- not any mysterious forces -- means there will always be questions we

Good Intro To Critical Thinking To Give to Young People

Published by Thriftbooks.com User , 19 years ago
I was given this book as a young teenager by my father when I was interested in the Bermuda Triangle. I am very lucky he did. The book carefully goes through dozens of "cases" of missing craft and convincingly shows them to be either the victims of storms, mechanical failure and in several instances, simply made up. By far the profoundest impact of this book was the exposition of the lies and mendacity of the writers of such books - a young person needs to hear and be shown in a non-condesending way that just because something appears on TV or in book form doesn't mean its true. Larry Kusche's book started me on the road to critical thinking, to ask "What does this mean?" to any given statement. I went on to read a book or two more debunking UFOs and other peudoscience, but Kusche's book did the main trick by getting across to me the importance of checking sources, asking if other motives are involved (like making money out of decent but unsuspecting people). I also recommend the *VHS tape of Nova's show, The Bermuda Triangle,* which is a debunking tape and promoter of critical thinking. I also recommend Carl Sagan's book *The Demon-Haunted World* which goes into incredible detail (in a non-condescending way) about why some people need to believe in such things as alien-abduction (or in an earlier era, demonic possession), false memories, the techniques of frauds like Uri Geller, and considers how we can encourage critical thinking in our society.

Still afloat after all these years!

Published by Thriftbooks.com User , 20 years ago
Many years ago, this marvelous book served as my introduction to skeptical literature, along with Ronald Story's "The Space-Gods Revealed." Truth may not always be stranger than fiction, but it's a lot more fun. And the truth, ultimately, is that factual omissions, outright lies, and lazy scholarship are the real stuff of legends like that of the Bermuda Triangle. Of course, television specials narrated by Rod Serling help, too--not to mention the endless hyping of the paranormal on various cable channels.Larry Kusche may have saved me from a lifetime of belief in idiotic, media-generated poplore, and how can I thank him enough? Possibly the most enjoyable piece of skeptical detective work in print.

Published by Thriftbooks.com User , 21 years ago
This book is "just the facts" without the hyperbole and sermonizing that so many "debunking" authors relish indulging in. Kusche was the first to systematically and methodically study many of the "Bermuda Triangle" mysteries and his hard work is often cited in many publications and televised programs with no credit going to Kusche. If more Paranormal investigators took this much time and effort to substantiate their facts I suspect many more "mysteries" would be solved.

Debunks all the Bermuda Triangle nonsense

Published by Thriftbooks.com User , 24 years ago
Author virtually goes case by case and gives the reader a pausible reason behind each "disappearance." The five aircraft of Flight 19, arguably the most famous Bermuda Triangle case, didn't "disappear." The five planes are probably rusting in a thousand feet of water southeast of Jacksonville, Florida. The case of the "disappearance" of the MARINE SULPHUR QUEEN is indicative. It didn't "disappear"; it blew up. Debris was recovered. Author's research is impeccable. It is a joy to read a researcher like Mr. Kusche prove his case with facts. His book is the only book worth reading in the whole Bermuda Triangle genre.
Trustpilot
Copyright © 2022 Thriftbooks.com Terms of Use | Privacy Policy | Do Not Sell My Personal Information | Accessibility Statement
ThriftBooks® and the ThriftBooks® logo are registered trademarks of Thrift Books Global, LLC