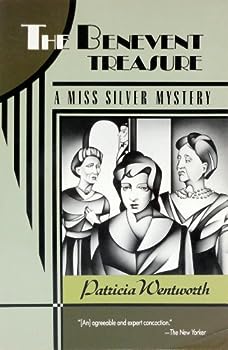 Miss Silver finds herself on a troubled scene while investigating the mysterious disappearance of a young man who worked for two elderly sisters years earlier and may have known too much, perhaps, about a legendary family treasure. There's nothing like a good ancestral curse.--San Francisco Chronicle.

A Gothic Mystery this time

Published by Thriftbooks.com User , 16 years ago
Ms. Wentworth goes gothic in this one. This is an entertaining tale about ancient family secrets, hidden treasure, secret passages and murder. We have two sets of appealing lovers, and two old-maid great aunts to complete the story. The heroine is Candida Sayle, and she is a nice young lady that finds herself asked to visit her two maiden great aunts, but when she arrives at their old house she finds secrets, danger and of course Miss Silver. This is a pretty good story, and quite different than most of the books in the Miss Silver series.

Published by Thriftbooks.com User , 18 years ago
Someone scribbled "Dan 12:4" on the first page of my second-hand copy of "The Benevent Treasure"--"And those who are wise shall shine like the brightness of the firmament..." Miss Silver is a wise old lady, no doubt about that. She is also a sympathetic listener, although the sound of her knitting needles going click click click might eventually drive her confidant to homicide. That's okay too, since Miss Silver is also a private detective (shades of Miss Marple!).Even though "The Benevent Treasure" has a little old lady detective who knits socks for her nephew, it's not exactly what I would call a 'cozy.' It's the story of two sisters who are so warped by their dominating Victorian father and his screwy legacy that they spend the rest of their lives alone together (except for servants) on the ancient Benevent estate, irritating the living daylights out of each other. A third sister was kicked out of the family for marrying beneath herself, and eventually turned her unmarried siblings into great-aunts, although the two branches of the family don't speak to each other.The story really begins with the Benevent sisters' great-niece, Candida Sayle while she is on a vacation at the sea shore with a school friend. As Candida registers at the seaside hotel, two old ladies dressed in black recommend that she go for a nice walk along the seashore. High tide doesn't occur until 11 P.M., so she has plenty of time for a stroll. Since her friends' train hasn't arrived yet, Candida decides to take their advice, and soon finds herself trapped on the tiny ledge of a very high cliff by a tide that came rolling in at 9 P.M.The teen-ager is rescued by a young man who is studying to be an architect. When they get back to the hotel, the two ladies in black have vanished.Five years pass while Candida, who is an orphan, nurses her aunt Barbara through her final illness. After her aunt's death, Candida receives a letter from the Benevent sisters, inviting her to come live on the ancestral estate with them. They represent a branch of the family that would have nothing to do with Candida's grandmother after her marriage. Nevertheless Candida decides to pay a prolonged visit with her great-aunts (whom she has never met), since she has nowhere else go.Candida makes a well-mannered entrance to the old, Elizabethan family manor at tea-time and we get our first glimpse of the two great-aunts: forbidding, ramrod-stiff Cara (the youngest sister); and timid Olivia (think of Scarlet and Melanie if they'd been buttoned up in the same plantation all of their lives, and had never flirted with anyone, much less Rhett or Ashley). Right away, the mysteries begin to pile up. Candida dozes off for a second while her Great-Aunt Cara is droning on about the proud family lineage, and she dreams that her two old relatives are actually the women in black who tried to drown her five years past. The hidden family treasure (emerald buttons, gold plate, a golden figurine by Cellini

Published by Thriftbooks.com User , 18 years ago
Wentworth's typical method of drawing the reader into the story - and of inspiring the wish to see justice done without making the crime a pure tragedy - is for an unsympathetic character to be murdered, and for one of a pair of young lovers to be suspected unjustly of committing the crime. Usually the man is the suspect and the woman then engages Maud Silver to see justice done, since as a byproduct this will also ensure that right will prevail.This case, however, experiments with a different formula: the obvious candidate for the part of Intended Victim is the female romantic lead, Candida Sayle, and the story opens with her first meeting with Stephen Eversley under circumstances ensuring that the two will get to know each other very well, very quickly. Candida, having been misled by two fellow guests about the time high tide is due during a visit to the seaside, is trapped halfway up a cliff. Stephen, hearing her cry for help and seeing that she can't hang on long enough to bring in a rescue party, helps her onto a safer ledge, although they'll be trapped there until daylight makes it possible to finish the climb to safety. The unusually mature 15-year-old and the young architect talk of many things, and become firm friends, although they aren't to see each other again for several years. Among other things, Stephen learns of the two old ladies who, meeting Candida while signing the hotel register, told her that high tide was two hours later than it really was. While she doesn't then learn their identities, he does, although they don't pool their information until their next meeting. After all, it must have been carelessness rather than malice - why would two strangers want to endanger a 15-year-old girl?Five years later, Candida's guardian - her father's sister - dies after a long illness, leaving Candida without savings and without proper training for a job, so a letter from Candida's great-aunt Olivia Benevent offering the hospitality of Underhill, the family home, is a windfall, as well as an end to an old family quarrel. Candida's grandmother and namesake was the second of three sisters, and the only one to defy her father with an "unsuitable" marriage - or any marriage, come to that. The others, Cara and Olivia, remained under the tyrant's thumb, and to this day subscribe to his old standards. Cara can't stand up for herself at all after so many years of oppression, while Olivia has herself become a tinpot dictator. When Candida learns that Stephen by chance is the architect engaged to check over Underhill for problems and reopens their relationship as a meeting between equals, it doesn't suit Olivia's plans at all: Stephen is "in trade", and more importantly, the Benevents' easygoing secretary Derek would be under Olivia's thumb if *he* caught Candida's eye.For under the terms of their grandfather's will, the Benevent estate, including the mysterious treasure Ugo di Benevento brought with him when establishing the family's fortunes in En

A House of Secrets

Published by Thriftbooks.com User , 20 years ago
This mystery has a gothic element that gives added suspense. Candida, a penniless orphan, is invited to stay with two elderly relatives. She wonders why is Cara so sad,and why is she forbidden to talk about the young man who used to live there? This involves the haunting story of a lost love and aristocratic pride. The plot is rather unlikely but fun.
Copyright © 2020 Thriftbooks.com Terms of Use | Privacy Policy | Do Not Sell My Personal Information | Accessibility Statement
ThriftBooks® and the ThriftBooks® logo are registered trademarks of Thrift Books Global, LLC