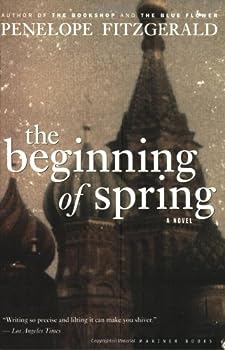 The Beginning of Spring

This description may be from another edition of this product. Short-listed for the Booker Prize "Fitzgerald was the author of several slim, perfect novels. The Blue Flower and The Beginning of Spring both had me abuzz for days the first time I read them. She was...

Published by Thriftbooks.com User , 20 years ago
A truly beautiful and moving book permeated with humor, insight and compassion. It describes an English family living amidst the overwhelming chaos of life in Moscow in the early nineteenth century. Penelope Fitzgerald reminds one of Jane Austen with her soft, ironic touches and delicately-drawn characters.

Published by Thriftbooks.com User , 20 years ago
This is an evocative book, I was transported back in time to pre-communist Russia; her descriptions pull you into the story and hold you. I purposely read only two chapters at a time because I didn't want to leave that place and those characters. Read this as I did, curled up with a mug of tea late at night or early in the morning.

Published by Thriftbooks.com User , 21 years ago
Did your copy have 187 pages? If it had more, I would very much like to know how your version finishes. I, and others have commented on how Ms. Fitzgerald leaves a certain ambiguity at the end of some of her works. She invites her readers to finish the story based on what she has shared, or the reader has understood. This time around, I first felt I was reading a work like Dickens' unfinished, "The Mystery Of Edwin Drood". However this time it was a bit abrupt, a door opens, the reader pops their head in, and, she decapitates the reader with efficiency that Dr. Guillotine would have admired.This is the fifth of her nine novels I have read, and it will be difficult to top this work. Everything I have read has been excellent, so the pleasure of reading her work is just a matter of degree. The complaint as stated at the beginning is more frustration than anything else. So much appears to be shared with the reader, that ultimately deception is far to mild a word, and then when you think the puzzle is complete; she adds another thousand potential pieces by bringing the story to an abrupt halt.But the story really is quite complete. After you read what she has written a logical explanation follows. She sets the process in motion, steps back, and knows the reader will continue to follow her lead. She pulls the strings of a reader like twine on a top. Once pulled she can step back, the top continues to spin. She is as manipulative as any writer I have had the pleasure to read, she also respects her readers with the presumption they will read what she gives them, and though left wanting more, will be able to put their own finish to what she has written.I cannot use any names, as it would ruin the piece. She produces one character that is such a brilliant fraud, that when his actions come to be known, his victims are left with mouths agape when they should be throttling him. As she has done in other works, she has children that are well beyond precocious, and other players that the reader is routinely lead to underrate.Ms. Penelope Fitzgerald was a great discovery for me, as I knew nothing of her or her work. She started writing late in life, and sadly died earlier this year. The collective work she has left behind, is as good a written legacy any writer could have left, for all who love to read.

Wow! How could this be written by someone who wasn't there?

Published by Thriftbooks.com User , 21 years ago
This is the most likable of the four PF novels I've read (I admire all of them). Her ability to create characters with extreme economy is breath-taking. Even more than in _Blue Flower_, she illuminates a milieu distant and time and space, the Moscow of a British businessman in Moscow ca. 1913 (i.e., on the verge of the First World War, the Bolshevik revolution further off). I don't really know that there were households or businesses like those she brings to life. If the concrete details are imagined rather than researched, her accomplishment is even greater, but it is also considerable if she has "merely" brought back to life vanished Russian and expatrate English ways of being. One of Fitzgerald's many gifts is creating prematurely wise prepubescent female characters (as in _The Bookshop_ and _Offshore_) who view the fumblings of adults with clear-eyed but mostly gracious bemusement and fitfully attempt to keep the adults from totally mucking up. Dolly takes that role here. The omniscient narrator has her own compassionate bemusement at the frailities of adults who want to be loved and try to be useful to others. Frank and Selwyn are prime examples from this book. As far as I can tell, the only thing Ms. Fitzgerald can't do is create rounded prepubescent male characters (Ben here).

Published by Thriftbooks.com User , 23 years ago
Many writers tend to get stuck on one theme and write the same story over and over. Not Penelope Fitzgerald! I've enjoyed THE BOOK SHOP, OFFSHORE, and THE BLUE FLOWER, each so different that I'm amazed the same author penned them. THE BEGINNING OF SPRING is my most recent Fitzgerald reading, and it may be my favorite so far. Frank Reid, the main character, runs a printing company in Moscow, a business he inherited from his father. Frank was born and brought up in Moscow although he is still considered a foreigner because his parents were English. Frank was sent back to England to polish his education and while there he married Nellie, a woman who felt constrained by the narrowness of her English hometown. She was ready to leave that town, but she wasn't prepared for Moscow and could never quite adjust. One day, she gathers up their three children and leaves on the train to return to England. Not being able to cope with the children, she sends them back to Frank before she continues onto England. Frank is mystified by his wife's actions and doesn't know if he will be able to cope with the children either. This is the story of a domestic crisis, but the backdrop of unrest brewing in Russia clearly presages the Revolution. The year is 1913. Frank doesn't know how much longer he can maintain his business, and he's not sure where his sympathies lie. Ms. Fitzgerald does have one trick: she seems to lead the reader one direction, and then bam! you find that's not where she was headed afterall. I thought THE BEGINNING OF SPRING was quietly wonderful, but when it concluded I found that it just seemed quiet and the resolution was resounding.
Copyright © 2020 Thriftbooks.com Terms of Use | Privacy Policy | Do Not Sell My Personal Information | Accessibility Statement
ThriftBooks® and the ThriftBooks® logo are registered trademarks of Thrift Books Global, LLC