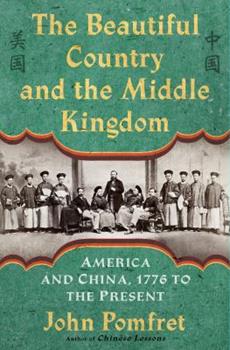 The Beautiful Country and the Middle Kingdom: America and China, 1776 to the Present

A remarkable history of the two-centuries-old relationship between the United States and China, from the Revolutionary War to the present day From the clipper ships that ventured to Canton hauling cargos of American ginseng to swap Chinese tea, to the US warships facing off against China's growing navy in the South China Sea, from the Yankee missionaries who brought Christianity and education to China, to the Chinese who built the American West, the...

Published by Walter Ko , 3 years ago
This is a book covering the 240 years of history of Sino-American relationships. China opium trade made the big five families fortune with the Ivy Leagues colleges sharing the dark gold. Howqua was the wealthiest man in the world and was godfather to many Americans! Mr Pomfret did a good job in documenting the history as history major from Stanford and chief editor of Washington Post of Los Angeles. However, he got three facts wrong: Boxer-Muslim? (p.112), Minnie Vautrin tomb in Seco, Illinois, it was in Shephard, Michigan (P.256), Churchill iron curtain speech in Fulton, Mississippi (p.359), actually in Missouri. I had visited both places. There were two attempts to send Generalissimo Chiang Kai-shek to heaven (p.304, 411). America want to make China great in its image and value. China runs in its own way quickly and US feels threatening. Will the country of for the people, by the people of the people sit down with the country of 3 peoples principles for world peace? This is a good reference for the White House and Congress to learn from history!
Trustpilot
Copyright © 2022 Thriftbooks.com Terms of Use | Privacy Policy | Do Not Sell or Share My Personal Information | Accessibility Statement
ThriftBooks® and the ThriftBooks® logo are registered trademarks of Thrift Books Global, LLC