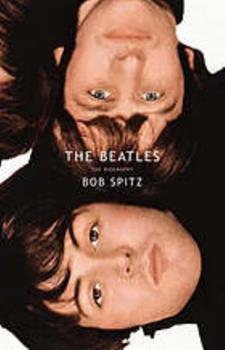 The Beatles: The Biography

This description may be from another edition of this product. As soon as the Beatles became famous, the spin machines began to construct a myth - a myth that has continued into the present. The truth is far more interesting, far more exciting and far more...

No "Paperback Writer" Here; The Author Deserves His Hard Cover

Published by Thriftbooks.com User , 15 years ago
Is the world ready for a thousand-page critical history of the boys from Liverpool? The answer is a resounding yes, because Bob Spitz addressed this project with the thoroughness of a presidential biography. Moreover, he is a magnificent story teller, and even at its length this work is a page turner. The young reader will find this a remarkable tale of a defining moment in the entertainment industry, while old "Uncle Alberts" like myself will remember the days when we all hacked around on guitars to get that opening chord to "Hard Day's Night," George Harrison's G7 with an added ninth and a suspended fourth, as the author explains. [502] So what can the reader expect to learn from this compelling tale of the foursome? The British Setting. All four Beatles grew up in a country recovering from war, in an industrial port town [Liverpool], where the natives called themselves "Scousers" and nurtured a long-standing inferiority complex regarding London and England's upper class. The government owned radio station, the BBC, effectively embargoed the emerging US rock music as substandard. Teenagers like John Lennon devoured American artists like Elvis and the Everly Brothers from a rogue radio station in Luxembourg, of all places, while reveling in England's youth pop of the time, Skiffle. The Lennon-McCartney Brotherhood. Spitz is masterful in describing the twelve year relationship of the two, who met at roughly the age of 17. They became like brothers, though in the mold of Esau and Jacob, perhaps. Much has been written of their composing mastery, but Spitz documents just how prolific and spontaneous they actually were. What is equally surprising is how they composed during periods of terrible strains in their relationships. When John and Paul could no longer be reconciled, the Beatles dissolved. Brian Epstein. He is, as the story unfolds, the best thing and the worst thing to happen to the Beatles. He was the young manager of the record department in his family's department store, who for a multitude of reasons made the Beatles his project. His moxie, coupled with the Beatles' stage charisma and not a little luck, landed the group's contract with Britain's recording giant EMI [and its American subsidiary, Capital]. Again, for complex reasons, Epstein was able to control the group's inner dynamics after it became internationally famous. But he was a dreadful business manager--the EMI contract, for starters, paid pennies for most of the Beatles' greatest hits and copyrighted lyrics, and as an afterthought he sold marketing rights to Beatles' products to an unknown entrepreneur for a 10% return. [465ff] Distracted by a dark and violent homosexual lifestyle, he probably cost the group close to a billion dollars in lost revenue. Ringo Starr. Aren't drummers a dime a dozen? Not superstar drummers, apparently. As the Beatles stood on the threshold of their breakout in 1962, McCartney and Lennon determined that the absence of a first rate drummer was th

Published by Thriftbooks.com User , 15 years ago
I liked this book. The author has been interviewed saying "You'll hear many things you didn't know about the Beatles before". I didn't really learn anything new, but I learned some things better. For example, John comes accross as being very angry, narcissistic and treating Cynthia and Julian as though they are invisible. It is true that Spitz used a lot of material from a source criticized for being overly harsh on Lennon (Goldman), but there are a lot of stuff we all know to be true about John that fit this picture, too. Such as the fact that Julian had the pleasure, as a teen, of reading an interview in Playboy with his dad in which John was quoted about his first son's conception, "Julian came out of a whiskey bottle, he knows that, I told him so." At a time when John was making headlines for being a "househusband" and "taking care of" baby Sean. Not a candidate for Father of a Teen of the Year. I should note that Spitz does not seem to be setting out to put down John in this work; he certainly gives Lennon his due, for example, in how dedicated he was in working at the beginning (during the drug era this changed a bit). And Lennon does not come off as the foolish one during the "bigger than Jesus" fiasco, for example. But the information this book reconfirms for me reminds me why I think Paul was the smarter and more talented one of the Lennon-McCartney partnership, against most of the worlds' opinions. In the meantime, I am thrilled with the extent to which this book attempts to delve into relationships, even those concerning Sir George Martin, Brian Epstein and the boys. I'm a little less worried about Brian , for example. It seems it's still a mystery if he got John into bed with him in Spain....but Brian had such a stable of cute available young men in England that he was apparently not very sexually deprived, and I don't really think he died of a broken heart. This is also the first book I've read that has discussed much of Yoko's childhood during the war, which is an interesting story apart from that of the Beatles. The book ends abruptly, as if the Beatles story ended when they broke up, which of course it did not. I would have liked to hear about some of the trademark conflict with Steve Jobs (which I secretly think has turned into a game that Paul and Yoko play to guess what Steve Jobs will invent next), as well as more about the deaths of John and George and the effects of those deaths on the two remaining Beatles (the Twotles). Finally, I would like for him to have addressed the "facts" we've held on to awfully tightly that seem odd. For instance, "Hey Jules" sounds like a good working title for "Hey Jude", just like "Scrambled eggs, ooooh baby how I love your legs" was a good working song for "Yesterday." But you know what? "Hey Jude" is not about a child whose parents are getting divorced. It's about a young man who's in love with someone and trying to get the courage to ask her out. I remember reading

Tired of reading reviews by those that never read the book

Published by Thriftbooks.com User , 15 years ago
I am currently reading this book and find it quite entertaining. Now to the point. I am sick and tired of reading reviews on books, CDs and DVDs where the reviewer has not even read the book, listened to the CD or watched the DVD. Give me a break. If you did not read, listen or watch then keep your comments to yourself.

Published by Thriftbooks.com User , 15 years ago
I found "The Beatles" to be a very compelling read. As someone who grew up during Beatlemania but hadn't thought much about it for decades, Spitz's book brought back the excitement of the era. It was fun to recall and relive the excitement of each song as it was released. But it was also insightful to learn about Lennon and McCartney's Irish heritage, which obviously had something to do with their capability as wordsmiths. And it was interesting to see the painfully slow process of the group acquiring and discarding bandmembers as they became the Beatles. They slogged away for years, serving an apprenticeship that was longer than the careers of many rival entertainers. And Spitz does a great job of recreating their early world, from the seedy postwar gloom of Liverpool to the harsh lights of Hamburg's red light district. There's loads of trivia, which is always fun. And while I might not always agree with the author's analysis of a given song or motivation, his opinions, by and large, tend to be short and incisive. It's the big story itself that's the reason to read this. It's so energetic that the book moves along like a juggernaut.
Copyright © 2020 Thriftbooks.com Terms of Use | Privacy Policy | Do Not Sell My Personal Information | Accessibility Statement
ThriftBooks® and the ThriftBooks® logo are registered trademarks of Thrift Books Global, LLC