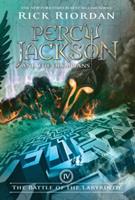 Percy Jackson isn't expecting freshman orientation to be any fun. But when a mysterious mortal acquaintance appears on campus, followed by demon cheerleaders, things quickly move from bad to diabolical. In this latest installment of the blockbuster series, time is running out as war between the Olympians and the evil Titan lord Kronos draws near. Even the safe haven of Camp Half-Blood grows more vulnerable by the minute as Kronos's army prepares to...

Published by Rae , 4 months ago
They sent me the wrong book. Instead of Battle Of The Labyrinth, I got The Last Olympian

A little ripped but good

Published by Alex Grace , 1 year ago
I'm so happy to get this book, such a great nostalgia trip. The one I received though was a little torn.

Published by Khalessi , 1 year ago
This is my favorite one of the series! There are some amazing laughable moments, but it gets super serious and thrilling. Everything is so well written. I couldn't put this one down nor did I want to!! Everything is building up to the last book and the last battle!! And the other plot lines while small will probably be revealed and stop my heart in the last book

Published by Rachel , 2 years ago
I literally love everything about the whole series it’s definitely one of my favorites!

Was sent the wrong edition.

Published by Anna , 2 years ago
I ordered the newest Disney Hyperion edition but I received the old, red edition instead. The book itself is great but i’m disappointed that it’s not going to match the rest of my collection.

Love The Old Myths Mixing With The New World

Published by Thriftbooks.com User , 14 years ago
THE BATTLE OF THE LABYRINTH is the fourth book of Rick Riordan's projected five-book opus, PERCY JACKSON AND THE OLYMPIANS. The series began with THE LIGHTNING THIEF and has constantly picked up steam as it's progressed. I've been reading the series to my son, and we're looking at the fifth and final book coming out next year with a mixture of anticipation and dread. We want the next book. We want to know how everything turns out for Percy, Grover, Annabeth, and the rest, but we don't want the adventure to end. Riordan's imagination and zest for action is matched only by his wit and humor. We've become fans and end up talking about the books and Greek mythology quite often. If you haven't read the series yet, you've missed out on a lot. And you'll probably want to stop reading this review now. Otherwise you're going to trip across some spoilers for the earlier three books. Riordan's books, Percy's adventures, are an organic tale, growing and adding to canon with each new volume. Things just don't stay the same in Percy's ever-changing world. Well, nothing stays the same except Percy's continuing bad luck with schools. At the beginning of this one, Percy's mom has a new boyfriend that gets Percy into a well-respected school that Percy normally wouldn't have a shot at with his past record of suspicious destruction. Sure enough, almost as soon as Percy sets foot on school grounds, he's attacked by demonic cheerleaders (the empousai, from Greek myth) and the school BURNS. I couldn't help laughing throughout the section as I read it. Friends of Percy are going to be blown away by the sequence even though they're expecting it. My son and I kept cracking each other up for days afterward. These books just keep on giving! The book turns more serious, to a degree, when Luke's plans to invade Camp Half-Blood are revealed. Luke, Percy's arch-enemy, is still trying to bring the Titan Kronos back to life so he can wreak vengeance against the Greek gods. Camp Half-Blood, because it houses and trains so many of the demi-gods - the children of the gods with mortal parents, is a prime target. As always, Riordan establishes the roots of his story in traditional Greek myth. This one deals with Daedalus, the famed inventor that created the Labyrinth that housed the Minotaur. According to Riordan's story, the Labyrinth has become - to a degree - a living thing that continues growing throughout the world and time. I loved the concept and my son was totally engrossed in the idea that the world was honeycombed with magical tunnels. This is the kind of thinking I've come to rely on the author for. There are other adventures that take place before Percy, Annabeth, and Grover find an opening to the Labyrinth and climb down inside it, but once they're in place the adventure kicks into high gear. They're chasing after Nico, the son of Hades, that no one else at the camp knows about. Percy feels guilty about the death of Nico's sister and doesn't w

Published by Thriftbooks.com User , 14 years ago
This is book four of the Percy Jackson series, with only one more installment to come. Readers from around ten years old will be thrilled by the adventures of the teenaged hero who just happens to be the son of Poseidon, God of the Sea, and all his friends, most of whom are the children of the Olympians from Greek Mythology. In my opinion, it would be better if you read the series in order, and the three previous books are: The Lightning Thief (Percy Jackson and the Olympians, Book 1) The Sea of Monsters (Percy Jackson and the Olympians, Book 2) The Titan's Curse (Percy Jackson and the Olympians, Book 3) In "The Battle of the Labyrinth", Percy and three friends set off on a quest through the treacherous labyrinth, in search of the inventor Daedalus, hoping that he will help them to defeat the army being assembled by Luke, son of Hermes. The thing is - Luke is just the messenger, and the evil he's about to unleash can bring down Olympus itself. Although still clueless about girls and relationships, Percy starts developing and unleashing his powers, and surprises even himself when he attempts to repeat Hercules' great stable cleansing project. Other demi-gods also come into their own in book four, and a mortal girl proves to be just the ticket, and in the nick of time too. In a related sub-story, the search for Pan reaches an exhilarating climax. Packed with monsters of all persuasions, gods and demi-gods, rescues, battles and side trips to Alcatraz and Mount St. Helens, this is by far the most exciting book of the series so far. Amazingly imaginative, thrilling and funny, this series by Rick Riordan continues to be a front runner in children's fiction, and I recommend it without reservation. Amanda Richards, May 25, 2008

Well worth the wait

Published by Thriftbooks.com User , 14 years ago
The Battle of the Labyrinth is the fourth of the Percy Jackson and the Olympians series, following The Lightning Thief, The Sea of Monsters, and The Titan's Curse. Several new gods are introduced, and the book picks up an ominous pace as it draws closer to the finale, and the determining battle between gods and Titans. Percy Jackson has just been accepted to a new school. Again. And despite his every intention not to get kicked out of this one too, being a demigod with Poseidon as your father tends to attract trouble. And monsters, in the form of peppy-but-deadly cheerleaders. After accidentally starting a fire, Percy makes a break for it - along with a mortal girl, Rachel Elizabeth Dare, who has the unusual ability to see through the Mist, the substance that usually hides gods and monsters from mortal eyes. When he finally makes it back to Camp Half-Blood, Percy finds that all is not well there. His friend Grover is in danger of losing his lifelong dream, his friend Annabeth is treating him oddly, and - worst of all - Nico di Angelo, the half-blood son of Hades, is still at large, trying to bring back his dead sister in exchange for another, living soul. But all of these pale in comparison to the danger of Kronos, whose followers are growing and whose resurrection is now imminent. When Annabeth is assigned a quest through the perilous Labyrinth of Daedalus, she takes Percy along for the ride - as well as Grover and Percy's Cyclops half-brother, Tyson. This is the most exciting and action-packed book yet, as the darkness closes in. Real losses and horrors are experienced in this one, both private and large-scale. It is clear that the final battle is drawing near, the battle in which - according to the prophecy - either Percy, or Nico di Angelo, will have a pivotal role to play in either the victory or destruction of Olympus and the gods. Highly recommended. Rating: Very good

Published by Thriftbooks.com User , 14 years ago
This is by far one of the best series I have ever read! It ranks right up there with Harry Potter and Lord of the Rings. It's writing is so original! Somehow it manages to be sarcastic and funny and sound like a teenager without getting tiring. I finished it in two days and wandered around for about an hour wishing I was still reading it!

Published by Thriftbooks.com User , 14 years ago
This is the fourth installment of the Percy Jackson series, and the most engrossing since the first one. Percy Jackson and his friends try to explore the Labyrinth in order to find the inventor Daedalus and prevent Kronos from controlling the Labyrinth. This book has a lot of the humor of the first three installments, but it does take itself serious at times. A lot of the plot threads like Pan finally come to end. I am glad that the series has not run out of steam, and I wait steadily for the final installment.
Trustpilot
Copyright © 2022 Thriftbooks.com Terms of Use | Privacy Policy | Do Not Sell or Share My Personal Information | Accessibility Statement
ThriftBooks® and the ThriftBooks® logo are registered trademarks of Thrift Books Global, LLC