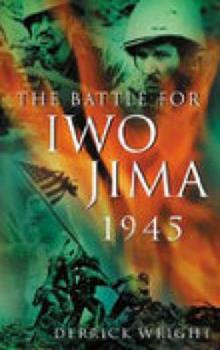 Iwo Jima was the United States Marine Corps' toughest ever battle and a turning point in the Pacific War. In February 1945, three Marine Divisions stormed the island's shores in what was supposed to be a ten-day battle, but they had reckoned without General Tadamichi Kuribayashi, the enemy commander. 'Do not plan for my return,' wrote Kuribayashi in one of his many letters to his wife, Yoshii. He knew that he and his garrison could not defeat the...

Another look at bloody Iwo...

Published by Thriftbooks.com User , 19 years ago
Derrick Wright lives in England, and so his way of viewing the Iwo Jima fight has a slightly different tone than the two best books by Americans, Bill Ross's "Legacy of Valor" and James Bradley's "Flags of Our Fathers." I don't feel comfortable saying that I "enjoyed" any of these three books on the battle...the fight was too costly in American lives, and too horrifying, to use the word "enjoy." My former father-in-law was there, and is quoted in Wright's book briefly. This is a worthy effort, and surprisingly, although I read all three of the books I mentioned in the same year, each is different enough from the others so that I did not feel I was reading the same book three times at all. The current price on this book seems a little high to me, however, and I would suggest buying "Legacy" or "Flags" first. In all the Iwo books, the dominant impressions one is left with are of courage, grace under fire, stress, fear, tension, endurance, and the ugliness of violent death on both sides. If you want to begin to understand U.S. Marines, and to value them, start with the books on Iwo Jima. Imagine yourself, at l8 or 20 years old, having to face what these guys faced when hitting the beaches. Don't be surprised if you have nightmares after reading.

Published by Thriftbooks.com User , 20 years ago
Once the Marianas fell, the U.S. wasted no time in building five airbases there in order to send the Superfortresses, the B-29s, over the Japanese home islands to bomb factories and large cities. On Iwo Jima, the Japanese maintained an airbase and a radar system. Situated half way between the Marianas and Japan, Japanese fighters were sent aloft to harass the B-29s both coming and going on their runs. The radar afforded the enemy a two-hour advance warning of the bombing raids. Iwo was taken to put an end to this and to provide a refuge for our damaged bombers on the return run. From now on, our own fighters from Iwo would accompany the big planes on the last leg of their flight.In this relatively small book, Derrick Wright does not waste a word. In less than 200 pages he tells in great detail of the struggles of the three Marine Divisions which took this island. He also does justice to the strategy and leadership of General Kuribayashi, the commander of the Japanese forces. Taking a lesson from the earlier amphibious assaults, he adopted a defense in depth rather than attempt to defeat the enemy at the beach. Forbidden as well were the useless banzai attacks. Instead he would concentrate on attrition, forcing the Marines to pay heavily for every bit of ground gained. He oversaw the construction of dozens of subsurface blockhouses, bunkers and a labyrinth of underground fortifications, many connected by tunnels. Once again, Howlin Mad Smith comes under criticism, this time for refusing to send in the 3rd Regiment of the 3rd Division when casualties ashore had soared. If the book has a fault, it is the too kind treatment of H. M. Smith. The Marines suffered 5,885 dead and 17,272 wounded. The Navy lost 881 men and another 1,917 wounded. Japanese death toll has been calculated at 21,060. 27 Medals of Honor were awarded at Iwo and Wright tells each story briefly in an appendix.

Published by Thriftbooks.com User , 21 years ago
I first got this book to understand why my grand father hardly spoke of being on Iwo, and now i know. This book may be short, but it is good for the people who are curious about one of the Marines bloodiest battles. I will definatly use this book for reference when i write a scriopt about Iwo Jima in the future.
Copyright © 2020 Thriftbooks.com Terms of Use | Privacy Policy | Do Not Sell My Personal Information | Accessibility Statement
ThriftBooks® and the ThriftBooks® logo are registered trademarks of Thrift Books Global, LLC