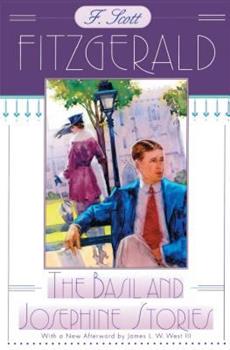 The Basil and Josephine Stories

Fourteen of F. Scott Fitzgerald's best-loved and most beguiling stories, together in a single volume In 1928, while struggling with his novel Tender Is the Night, Fitzgerald began writing a series of stories about Basil Duke Lee, a fictionalized version of his younger self. Drawing on his childhood and adolescent experiences, Fitzgerald wrote nine tales that were published in the Saturday Evening Post about his life from the time he was an eleven-year-old...

A Collection of Classics

Published by Thriftbooks.com User , 21 years ago
Originally published serially in "The Saturday Evening Post," Fitzgerald's "The Basil and Josephine Stories" was probably underappreciated in its time--the late 1920s. Fitzgerald's mastery of prose and storytelling shine, however, in this collection of short stories. The book is divided into two halves, the first dealing with Basil (a fictionalized version of Fitzgerald as a young man) and the second with Josephine (a fictional young woman in America in the early part of the 20th century). We follow Basil through the adventures and misadventures of his early life as he searches for acceptance and meaning. Josephine searches for love and friendship, among other things. Both meet with success that can only be described as questionable. Beautifully written and suprisingly deep, this collection offers profound insight into the psyche of the Lost Generation. I highly recommend it to anyone interested in modern American literature.

the best collection of short fiction yet

Published by Thriftbooks.com User , 21 years ago
this charming collection of stories written by f. scott fitzgerald follows the physical, emotional, and social growth of two characters at the turn of the century. Basil, the typical rebellious child, struggles to find some understanding of life, school, friendship, and, most importantly, women. fitzgerald details a number of episodes in basil's life starting with his childhood and following him through his entrance into school. i don't know if basil ever entirely grew up or learned as much as he desired, but he came as close as any man can. the josephine stories follow roughly the same time span, but tend to focus more on her relationships and her place in society as a young woman at the turn of the century. all of the stories are masterfully told and it is obvious why fitzgerald became such a well known and respected writer. his storytelling is unparalleled and his descriptive language and imagery transports the reader to a different place and time. i highly recommend this book to any fitzgerald fan, whether an experienced one or a not-so-experienced one. i think it a shame that this book does not get more recognition than it does, recognition that it most definitely deserves.

Published by Thriftbooks.com User , 21 years ago
I really liked this book. And this isn't coming from some super-articulate adult. This is coming from a 14-year-old High School Freshman. It really shows you what life was like back then in the early 1910's, and how teens back then deal with the same stuff as we do, such as popularity, dating, cars, etc.

The Basil stories are tremendous, Josephine's are bland.

Published by Thriftbooks.com User , 23 years ago
I found the Basil stories to be much better written than the Josephine stories. Basil's stories are fun and full of irony and satire. The reader sees definite growth in Basil. The Basil stories are excellent and worthy of great praise. As for Josephine's stories, I often found myself loosing interest in the stories. They tended to be bland, and I found it much more difficult to connect with Josephine than with Basil. The four star rating is largely based on the Basil stories, which account for about 2/3 of the book, and for the one Josephine story I really liked.

Published by Thriftbooks.com User , 24 years ago
Pure genius! Only Gatsby is better. Basil and Josephine are lyrical, magical; everything good that can be said about writing can be said about this book. It's great. Genius.
Copyright © 2020 Thriftbooks.com Terms of Use | Privacy Policy | Do Not Sell My Personal Information | Accessibility Statement
ThriftBooks® and the ThriftBooks® logo are registered trademarks of Thrift Books Global, LLC