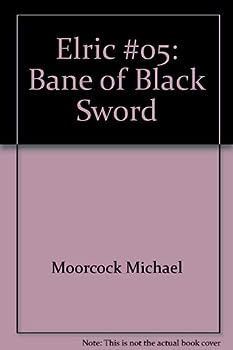 Stormbringer is brought Home!Elric returns to Yishana, and finds peace at last. Meanwhile, at the world's rim, dragging red horror in its wake, a horde unimaginable moves on the fabled, gentle,... This description may be from another edition of this product.

Published by Thriftbooks.com User , 14 years ago
The Bane of the Black Sword is also a collection. The Stealer of Souls Kings in Darkness The Flamebringers (also called The Caravan of Forgotten Dreams) To Rescue Tanelorn The first three are adventures with Elric and Moonglum, and the latter is actually a story of Rackhir the Red Archer, one of the worthy individuals the Eternal Champion meets from time to time.

5 of 6: The setup for Stormbringer.

Published by Thriftbooks.com User , 18 years ago
Michael Moorcock, The Bane of the Black Sword (DAW, 1977)The fifth of the six classic Elric novels picks up, as is usual with these books, where the fourth leaves off. Moorcock sets the last pieces of the puzzle into place (and here, we get a chance to see how everything that has come before is building to the climactic novel, Stormbringer), introducing us to Zarozinia, the love of Elric's life (and most of his motivation for continuing on the path upon which he was set in The Vanishing Tower). Much of this is setup for Stormbringer, but that's in no way to say this isn't good stuff. Once again, Moorcock takes his already intriguing concepts that he's built up throughout the series (unique hero, solid motivation, the excellent concept of the Eternal Champion, et al) and adds a few more twists and turns, to make them even more intriguing than they already were. Unfortunately, the series' main problem-its penchant for not going into detail on some of the truly fun stuff mentioned (e.g., the Forest of Troos, in the barren land of Org, where Elric and Zarozinia meet, both trying like mad to avoid the denizens of the forest)-is here in spades. But there's enough detail for the reader to get the general gist of what's going on and eventually hope Moorcock will write some stories set in Elric's world that have to do with these ancillary details. This would not be unprecedented; a story with Elric's friend Rackhir as its main character is included as an epilogue to one of the books, for example.There is one other annoying thing about the series I haven't yet touched on. It's ultimately annoying that Elric, no matter what he's faced with, has some form of supernatural ally who can help him with it. (You're attacked by lizardmen who are unaffected by normal weapons? Call on the god of the insects and get the help of millions of mosquitoes!) Never fails. This particular convention pops up in a number of places in the series, not just here.Still, overall, the book is good, it's readable, and the payoff, in Stormbringer, is astounding. ****

Published by Thriftbooks.com User , 19 years ago
Interesting monster and magic users. Cool plot. Different from the pompous books of Terry brroks or the rambling of tolkien.Strikes the perfect balance between fun and serious thought.Adventure and plot.Locations and personalities.No boring social justice themes or about how hard life was etc.Awesome action.Monstrous summonings.Great stuff, stear clear of anything with Von Bek or Erekose and Moorcock will treat you well. M favorite fantasy author bar none.

Published by Thriftbooks.com User , 23 years ago
I was not a fantasy fan before I read this series. Now I am hooked. Too bad they are not all this good. It has qualities that writers of any genre would envy. Read them all... you will not be disappointed. Very fluid delivery, crisp, entertaining, and engrossing.
Copyright © 2022 Thriftbooks.com Terms of Use | Privacy Policy | Do Not Sell My Personal Information | Accessibility Statement
ThriftBooks® and the ThriftBooks® logo are registered trademarks of Thrift Books Global, LLC